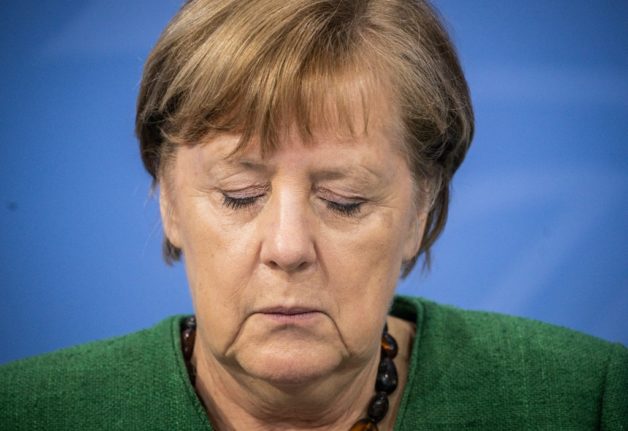 German Chancellor Angela Merkel speaks during a press conference following talks via video conference with Germany's state premiers on the extension of the current lockdown, at the Chancellery in Berlin on March 23, 2021. Photo: Michael Kappeler/AFP

As well as extending existing measures including keeping cultural, leisure and sporting facilities shut through to April 18, Merkel and Germany’s 16 state premiers agreed a tougher shutdown between April 1 and 5.

Almost all shops will be closed during the five days, and religious services will be moved online over Easter. Only grocers will be allowed to open on Saturday April 3.

“The situation is serious. Case numbers are rising exponentially and intensive care beds are filling up again,” said Merkel.

The British variant has become the dominant strain circulating in Germany, she said, noting that “we are in a new pandemic.”

“Essentially, we have a new virus…it is much deadlier, much more infectious and infectious for much longer,” the veteran leader said.

But Berlin and the federal states were forced to row back on relaxations this week as new infection numbers rose exponentially.

Merkel and regional leaders agreed at the last round of talks that authorities would tighten the screws again if that rate struck 100 over three days.

“It is absolutely right that we are hitting the emergency brake,” said Merkel.

But the tougher curbs did not come easily.

Negotiations between the regional leaders of Germany’s 16 states and Merkel were gridlocked for several hours over the thorny issue of whether to allow domestic holidays to take place over the Easter school holidays.

Some regional leaders had argued it made little sense to allow people to fly out to the Spanish island of Mallorca for their holidays while banning residents from taking overnight stays in their own state.

But finally, the leaders agreed to “appeal urgently to all citizens to refrain from non-essential travel within the country and also abroad — also with regard to the upcoming Easter holidays.”

Berlin had also struck a deal with air carriers to ensure that all travellers returning to Germany would be tested, Merkel said.

The chancellor added that Germany was “in a race to vaccinate” as the country struggles to accelerate its inoculation campaign.

Dogged by supply issues and mistrust over AstraZeneca’s jab, Germany’s vaccination campaign has been sluggish compared to the British or US programmes.

On Tuesday, Merkel said she would support her former defence minister and current EU commission president Ursula von der Leyen’s threat to block AstraZeneca vaccines produced in the bloc from being exported.

“We have a problem with AstraZeneca,” she added.

European officials are furious that AstraZeneca has been able to deliver its UK contract in full while falling short on its supplies to the EU.

In her tough warning to the Anglo-Swedish pharmaceutical giant last Saturday, von der Leyen said: “That’s the message to AstraZeneca: you fulfil your contract with Europe first before you start delivering to other countries.”