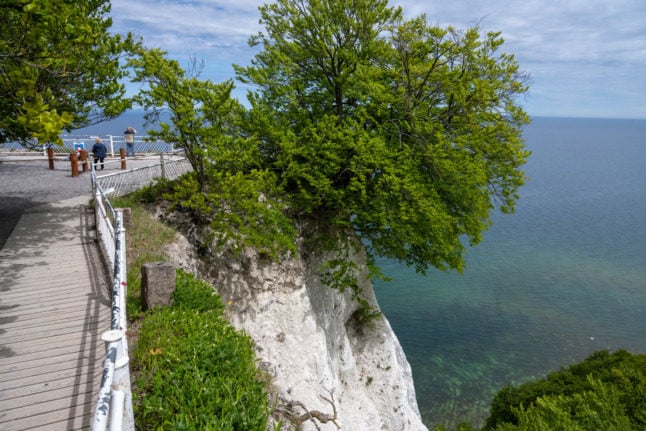 The following hikes can be found in Berlin’s neighbouring state of Brandenburg and Meckenburg-Western Pomerania. Don’t forget that you can use your €9 public transport ticket on local transport and regional trains for the months of June, July and August 2022.

This route takes in the idyllic village of Caputh in Brandenburg, which is best know as the place Einstein escaped to when he needed respite from the mid-summer Berlin heat. You can visit his house at the start of the trip, after getting off the bus from Potsdam.

The Schwielowsee is a real beauty spot. From Caputh head southwest to the small village of Ferch and then back up the west bank, making sure to take a route through the gardens of Schloss Petzow, a bucolic country house with gardens that roll down to the lakefront. A hidden tip: the Japanese garden in Ferch has been described by visitors as “a truly beautiful and peaceful place.”

If you’re feeling up to it, take a detour into Werder, a town with charming centre famous for its apple orchards.

There are also several beer gardens along the way which offer respite during the hot summer months. The Gaststätte Baumghartenbrück is particularly charming and has great views over the waters.

The whole circuit is doable in about three and a half hours. Looping the Mühlenbecker Land in Brandenburg

Another one that is easily accessible from Berlin, this two and a half hour walk takes you past the abandoned palace of Dammsmühle a beautiful baroque building that has sadly fallen into ruin.

The starting point in Summt can be reached with the 806 bus from northern Berlin. From there the route progresses around the Summter See before passing north of the Mühlenbecher See between two smaller mini-lakes. The route comes out above the Mühlenteich and then cuts south to visit Schloss Dammsmühle before returning along the north bank of the Mühlenbecker See.

There are ample opportunities for bathing on remote and largely empty lakesides. And another Japanese secret should be noted here: a hidden Pagode on the north shore of the Mühlenteich.

This one takes us into the heart of the nature reserves north of Berlin. People travelling from the capital will need to take the train to Gransee – about an hour from Gesundbrunnen. A short bus journey later and you will arrive at the start of the tour in Neuglobsow.

The route couldn’t be more simple. You just stick to the banks of the lake. A clockwise route is recommendable as you then finish with the Fischerei Stechlinsee smokehouse, where you will be served delicious locally-caught fish.

The whole tour takes about four and a half hours. Hikers have often remarked on the clarity of the lake’s waters. The next location on our trip takes us into serious hiking territory. This is a 24 kilometre trip on the beautiful island of Rügen in Mecklenburg-Western Pomerania, so you need a pretty good level of fitness if you are going to attempt it. It starts in the village of Neuenkirchen and follows the banks of the Jasmunder Bodden before finishing just south of the fishing village of Sassnitz.

It gets going with a site of historical note – the oldest church bell on the island at Neukirchen’s Maria Magdalena Church. The next stop is Lasse before one crosses the bridge over the Liddower stream. This route also delivers a palace – you’ll pass the Ralswiek Schloss on your way.

A little tip: if you are a fan of salt water fish, visit the harbour at Sassnitz at the end. The fish shops there fry up the day’s catch of cod, herring and lots more. Delicious and affordable.

This trip can be broken down into two days with an overnight break in the community of Ralswiek. Sea Birds on the Jasmunder Bodden at sunset. Photo: DPA

This huge hike will demand five days of your time, but it could well be five of the most relaxing days you will spend in the German countryside. It starts in a Unesco nature reserve at Zarrentin in Mecklenburg-Western Pomerania before heading north along the Schaalsee to the monastery at Rehna. The route then heads east to Ratzeburg and finally winds back down south to the monastery at Zarrentin.

All of the monasteries are classic examples of “backstein gothic” or red brick gothic and date back to the 13th century.

The route involves hikes along lakesides, though forests and into charming cobble-stoned villages. It also crosses the former border between East and West German on several occasions and offers the chance to see a border crossing from that era that has been preserved. The gates of the Rehna monastery. Photo: DPA

To Darß lighthouse and back

This hike starts in Prerow, a holiday village on the Darß peninsula in Mecklenburg-Western Pomerania. From there you walk north to the coast and then head out west. You can either walk along the beach or take the hiking route through the forest. The route to the lighthouse is well-marked and takes about an hour and a half.

Hikers who return along the beach can trawl the seaweed for amber before stopping off for a beer at the surf bar at the Regenbogen campsite.