An influx of Ukrainian refugees and other migrants has pushed Germany's population above 84 million for the first time.

More people are living in Germany than ever before, according to preliminary stats released by the Federal Office of Statistics (Destatis) on Thursday.

At the end of 2022, an estimated 84.3 million people were resident in the Bundesrepublik - marking an increase of 1.1 million compared to the previous year.

Last year was also a year of record migration, Destatis revealed. In 2022, an estimated 1.42 to 1.45 million more people moved to Germany than moved abroad.

This means that net immigration was more than four times higher than in the previous year (329,163) and higher than at any time since the start of the time series in 1950.

Why are so many people coming to Germany?

The war in Ukraine has a lot to do with the astounding population growth seen in Germany last year. Following Russia's invasion of its neighbour, just over a million asylum seekers from Ukraine have registered in Germany.

That's almost double the number of Syrian refugees who arrived in Germany since the start of Assad's war. The latest statistics suggest that around 580,000 Syrians have been granted asylum since 2011, with the majority arriving in 2015 and 2016.

However, the fall-out from the Ukraine war doesn't tell the whole story.

According to Destatis, there was also a significant increase in the number of foreigners arriving from other countries in addition to Ukrainian refugees.

It's not entirely clear why this uptick in migration has occurred, but it could be the delayed effect of the Skilled Immigration Act, which came into force in 2020 - just before the first Covid lockdown started.

The Act aimed to make it easier for well-qualified workers to come to Germany, but after more than two years of travel restrictions, it could be that Germany is only just seeing the effects of the legislation.

READ ALSO: How the population of Bavaria is changing due to migration

What else had an effect on the figures?

Aside from migration, the declining birth rate and higher death rate also impacted the population.

In 2022, an estimated 735,000 to 745,000 new babies were born in Germany, according to reports from the registry offices. This represents a drop of seven percent against the previous year, when around 795,000 children were born.

The number of deaths, on the other hand, rose by around four percent to approximately 1.06 million.

Will Germany's population keep growing in the future?

Though the influx of refugees from Ukraine isn't expected to continue at the same rate in the coming years, the general trend of high migration should mean that Germany's population continues to grow.

In the three decades since German unification, the number of people living in Germany has generally increased each year - with the exception of 1998 and the years between 2003 and 2010. 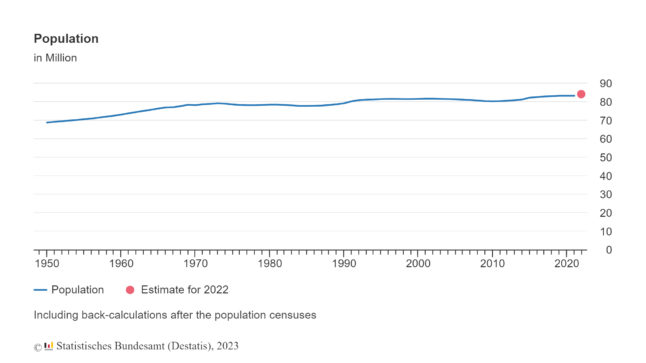 However, with the death rate tending to outstrip the birth rate, this growth has been solely down to immigration.

"Without net immigration, the population would have shrunk since 1972, as more people have died than were born every year since then," Destatis explained.

Following the release of the preliminary population figures, finalised numbers will be made available by Destatis in summer.

READ ALSO: How Germany's population is changing during the pandemic