On Thursday, Germany will be testing emergency preparedness in its second annual 'Warntag' - and for the first time including all cell phone holders.

Floods are sweeping through a region, a widespread power outage has occurred or a cyber attack hits large swathes of the country - these are some of the reasons why Germany might need to use its disaster warning systems in the future.

On Thursday at 11 am, both federal and state governments will be testing these system for 45 minutes in order to be better prepared in case of a catastrophe.

For the first time, the Bundesrepublik will be sending out a warning to all cell phone users with a German number using a "cell broadcast", which will they receive without having to be signed onto a particular app or part of a specific provider.

Why should Germany have a warning day at all?

The importance of alarm systems was highlighted by the flood disaster in the western states of Rhineland-Palatinate and North Rhine-Westphalia in July 2021, when people were not informed in time of the impending danger. Afterwards, a broad debate arose on how this could be improved.

Furthermore, amid an energy crisis and war within Europe, many people are also hyper-vigilant about what Germany would do in the event of a wide-reaching emergency.

Germany's first Warn Day took place on September 8th, 2020, but many complained that it was not effective nor wide-reaching enough.

READ ALSO: What to do in Germany if there's a power outage

What does the warning day test exactly?

A warning day is used to test the warning systems available for emergencies and disasters and to put technical procedures to the test. It is also an exercise to raise people's awareness and familiarise them with what happens when the authorities sound an alarm. 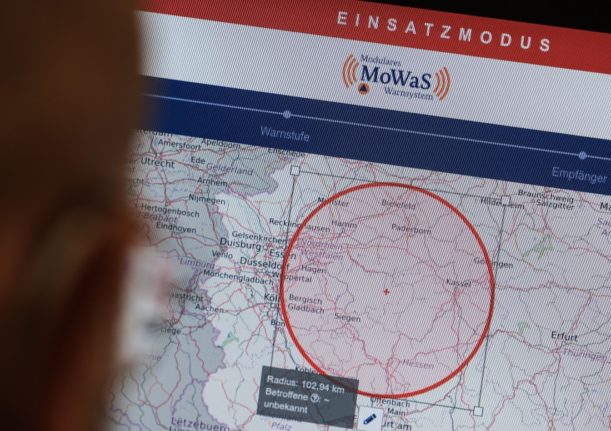 A screen showing a warning system is seen on a display at the Federal Office for Civil Protection. Photo: picture alliance/dpa | Oliver Berg

How exactly does the second nationwide warning day work?

A disaster scenario will be practised throughout Germany, meaning it will be extremely loud from 11 am onward. Existing or newly installed sirens will sound, and loudspeaker trucks will drive through the streets of some communities.

Announcements will also be broadcast on trains, radio and television. The warnings will furthermore be played on media sites on the Internet. They will appear on digital display boards, for example in city centres or at train stations.

The message will also be disseminated via warning apps. In addition, a test warning of the highest level will be sent to cell phones nationwide via “cell broadcast”.

How does the test warning via a cell broadcast work?

The system goes out through the mobile network, using very little data and reaching cell phone users even when the system is otherwise overloaded.

In cooperation with the mobile network providers, the authorities send a message with the respective warning to the cell phone that is logged into a mobile network cell and can receive network broadcast messages - similar to an SMS.

The information appears as a pop-up on the display and triggers an alert. This is the case even if the cell phone is set to silent.

The content of the message is deliberately kept short since as many people as possible should get the info via cell broadcast that there is no actual danger on the warning day.

Of course, this is different than in a real emergency.