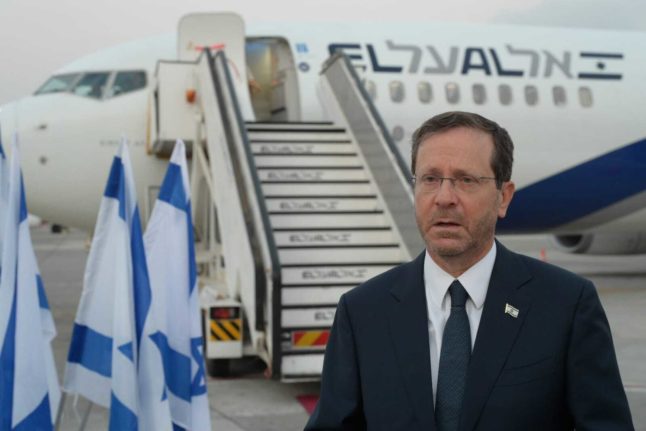 Israeli president Isaac Herzog speaks with members of the press ahead of a visit to Germany to mark the Munich Olympics massacre. Photo: picture alliance/dpa/GPO | Amos Ben-Gershom

“I am leaving this morning on a state visit to Germany, at the invitation of the President of Germany, Frank-Walter Steinmeier,” Herzog said in a statement.

“The main part of the visit will be the memorial marking the 50-year anniversary of the terrible massacre of the 11 Israeli athletes at the Munich Olympics in 1972,” he added.

The president’s trip to Munich follows a last-minute compensation deal reached last week between Germany and the families of the Israeli victims.

The bereaved relatives were offered $28 million by Berlin, in addition to $4.5 million previously granted.

Around 70 family members of victims are due to attend Monday’s memorial, Ankie Spitzer, whose husband Andre Spitzer was killed, told AFP.

The Israel Olympic Committee confirmed it would send a delegation to the September 5th memorial.

It will mark 50 years since gunmen from the Palestinian militant group Black September stormed the Israeli team’s lodgings.

They shot two people dead and took nine others hostage, all of whom were killed. Germany was blamed for botching an operation to rescue them.

Steinmeier’s office has not said whether the president will make a formal apology during the ceremony at Fuerstenfeldbruck air base, west of Munich, where the hostage-taking reached its violent end.

During his three-day visit to Germany, Herzog is also due to meet Chancellor Olaf Scholz and address parliament in Berlin. 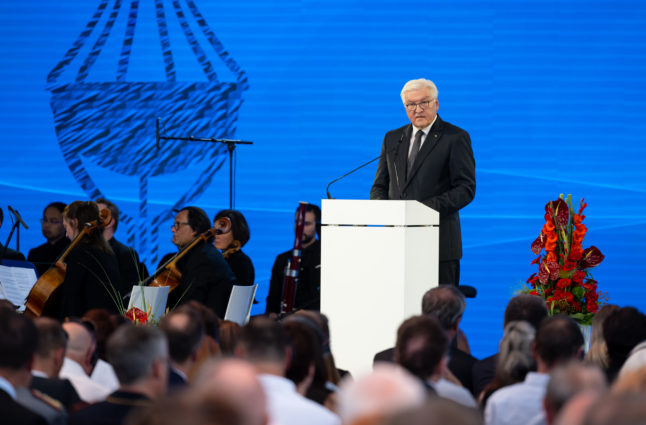 The apology by President Frank-Walter Steinmeier on behalf of Germany 50 years on came after a bitter and long fight by bereaved relatives for appropriate compensation and for Berlin to own up to mistakes made that led to the massacre.

“We cannot make up for what has happened, not even for what you have experienced and suffered in terms of defensiveness, ignorance and injustice. I am ashamed of that,” said Steinmeier at a solemn ceremony at the Fuerstenfeldbruck airbase where the attack reached its tragic climax.

“As head of state of this country and in the name of the Federal Republic of Germany, I ask you for forgiveness for the lack of protection of the
Israeli athletes at the time of the Olympic Games in Munich, and for the lack of clarification afterwards, and for the fact that what happened happened.”

Despite the devastation, the International Olympic Committee announced on the morning of September 6 that the Games would go on.

Steinmeier summarised the entire episode as triple failings – in the preparation of the Games and its security concept; the events of September 5th and 6th; and the “third failure began the day after the assassinations – the silence, the suppression and the forgetting”.

For decades, there was disregard for the victims’ suffering, he said, calling it “years of hardheartedness”.

The Games were meant to showcase a new Germany 27 years after the Holocaust, and to be a marked difference from Hitler’s 1936 propaganda showcase. But instead, they opened a deep rift with Israel.

Bereaved relatives have over the years battled to obtain an official apology from Germany, access to official documents and appropriate compensation beyond an initial 4.5 million euros.

As recently as just two weeks ago, relatives of the victims said they were offered €10 million – including the sum that had already been given.

Herzog said grieving relatives simply “hit a wall” whenever they tried to raise the issue with Germany or even with the International Olympic Committee.

“I think there was tragic suppression here,” he said on Sunday, noting the slew of failings that were “inhuman and incomprehensible” such as “the fact that the hostages were being led to slaughter and the Games went on.”

After families threatened to boycott Monday’s ceremonies, a deal was finally agreed last Wednesday for Berlin to provide €28 million in compensation.

Steinmeier had admitted Sunday that it was “shameful” that it had taken such a long time for Berlin to reach the agreement with victims’ families.

“It is my duty and my need to acknowledge our German responsibility – here and now and for the future,” he said.

“May today lead to you, the relatives, feeling that your pain is being taken seriously, that you feel that we are serious about our responsibility.

By Ralf ISERMANN with Hui Min NEO in Berlin