German word of the day: Wandern

The German language isn't known for sounding romantic, but this word has a poetic feel, and it seems to be almost every Germans' favourite hobby.

Why do I need to know wandern?

Because this is the perfect way to while away a Sunday afternoon, and the German doesn't sound half as stressful as the English translation.

Wandern (pronounced van-dern) is a verb and means to hike. But whereas hiking sounds like you need to be breaking out in a sweat and scaling high summits, wandern conjures up a much more pleasant picture, as if you are not only walking outside but also pondering what life means.

Those who have spent time in Germany will be aware that (das) Wandern is one of the most popular pastimes for Germans, with many people flocking to the outskirts of cities or going deep into the countryside to "be in the nature" on their days off work.

The difference between wandern and spazieren (to walk/stroll) or flanieren (to wander about aimlessly or meander), is that hiking requires some planning and organisation; there is a route and a goal to the walk.

As you might know, this is something Germans arguably do very well so they are likely to turn up to wandern with all the right gear, such as proper walking boots, a practical rucksack, an Übergangsjacke (a transition jacket for in-between-seasons) and even hiking sticks.

In German, a hiker is a Wanderer (male) or Wanderin (female). 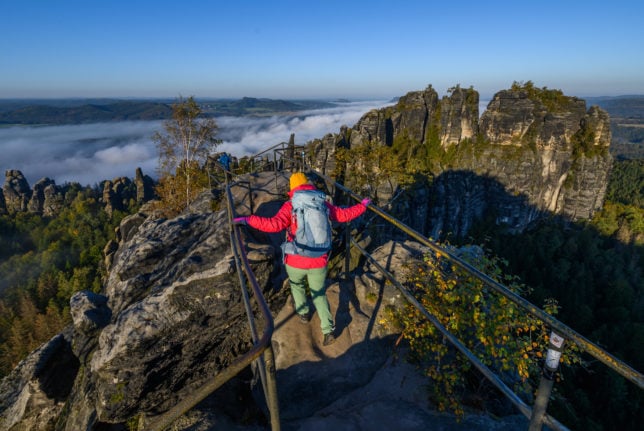 The word originates form Middle High German - which refers to the form of German spoken in the Middle Ages - and it has been documented since the 13th century.

That reflects the fact that hiking has enjoyed a long tradition in Germany, although it mainly involved religious pilgrims in the Middle Ages.

The German Romantic authors and painters of the 18th and 19th centuries popularised the great outdoors and the beautiful landscapes, which resulted in Wandern really taking off among the general population.

Germany's Harz mountains, Rügen and Sächsische Schweiz areas were the Romantics' favourite destinations at the time thanks to the rugged landscapes.

In the 19th century with the arrival of rail, people who could afford it began to travel to the outskirts of cities to walk for leisure.

Hiking infrastructure was built and today Germany has a network of Wanderwege (hiking trails) covering more than 300,000km.

There are also a ton of clubs and associations that people can join such as the German Hiking Association or Wanderverband which was founded back in 1883.

The word also expands to other areas of life. Wandern means to migrate, and the German word for immigration is (die) Einwanderung.

I love hiking through the countryside in summer.

Do you want to come hike with me?