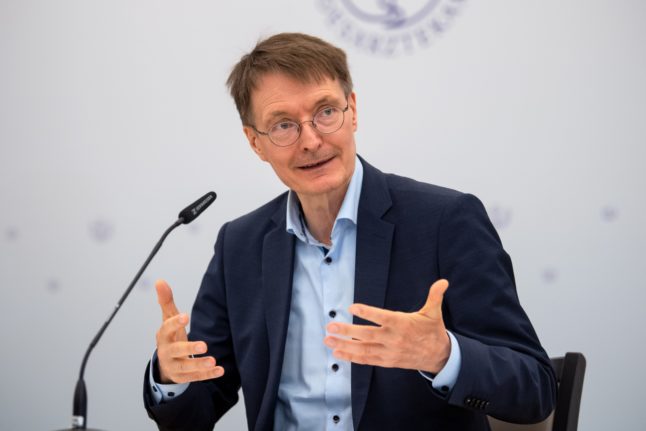 Karl Lauterbach speaks at a press conference about monkeypox in Berlin on May 24th. Photo: picture alliance/dpa | Sina Schuldt

In total, Germany expects to receive 240,000 vaccine doses, which have been ordered as a precaution to limit any possible spread of monkeypox.

Lauterbach told public broadcaster ARD: “40,000 units should come in the first two weeks of June, then 200,000 units after that.”

He said that he had signed the contract for the vaccine doses, and was waiting for the company’s response. “But I expect that we will have this vaccine soon,” Lauterbach added.

It is not yet clear who will receive the vaccinations in Germany, but a plan is being prepared.

By Friday May 27th, a total of 16 confirmed monkeypox infections had been reported to the RKI in Baden-Württemberg, Bavaria, Berlin, Hesse, North Rhine-Westphalia and Saxony-Anhalt. Further cases are expected.

The Health Minister reiterated that he did not expect a new pandemic to emerge from the monkeypox virus. “I do not believe that monkeypox really poses a threat in the sense of a pandemic,” Lauterbach said during the interview with ARD on Sunday evening. “The potential is not there.”

READ ALSO: How Germany wants to contain the monkeypox virus

Nevertheless, he said the spread of monkeypox has to be kept in check “We have to contain it,” he said. “We don’t want it to take hold.”

Lauterbach said last week that Germany had secured “up to 40,000 doses” of a smallpox vaccine. The vaccine, called Imvanex, is also approved in the United States against monkeypox.

Germany is recommending that anyone who suspects they have monkeypox should isolate for 21 days. They should also contact their doctor or local health authority.

What is monkeypox and how is it transmitted?

Monkeypox is a viral zoonosis (a virus transmitted to humans from animals) that causes small lesions on the skin, headaches and fever. It’s similar to chickenpox or smallpox, though the illness tends to be less severe than smallpox.

The symptoms of the disease caused by the virus are generally mild and clear up in 2-4 weeks without treatment, but can occasionally result in more serious illness if the patient has a weaker immune system.

It can be transmitted through close contact with an infected person or animal.

Monkeypox is endemic in several countries in West and Central Africa, which means it occurs there permanently.

Recently, however, monkeypox has also been found in more than 20 other countries – including Germany and other EU countries as well as Australia and the USA.

Monkeypox is related to smallpox, which killed millions of people every year for centuries until the disease was eradicated in 1980. However, monkeypox is considerably less dangerous. Most of those who contract monkeypox recover within a few weeks, and fatal illness is rare.