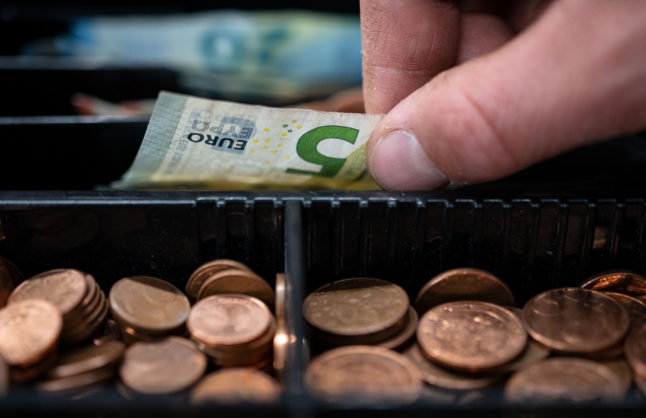 Russia’s war on Ukraine, as well as the effects of the Covid pandemic on supply chains, has changed the spending habits of Germans.

Energy costs have shot up since Russia invaded Ukraine in February, having a knock-on effect on consumer prices – which were already high due to the pandemic.

And it is having a big impact on people in Germany. Many people have signalled they are cutting back on buying over price-hike fears.

According to the survey by the Institute for Trade Research in Cologne, more than half of people living in Germany (54 percent) are afraid that they will soon no longer be able to maintain their standard of living because of the developments.

About two-thirds of respondents said they would cut back on their spending because of inflation.

In order to save more cash, consumers in Germany say they want to try and find special offers in shops and supermarkets, and compare prices more closely.

Almost 40 percent of respondents said they had postponed some purchases since the start of the Ukraine war.

This mainly concerned larger investments in the area of housing and furnishings. But according to the survey, many people are also holding back on buying products in fashion and electronics. One in two people also want to cut back on holidays and travel.

Meanwhile, four out of five respondents of the survey believe that the current increase in the prices of many products is only the beginning. Unfortunately, they could be right.

Inflation climbed to a record high in Germany of 7.4 percent in April – up from 7.3 percent in March, according to the federal statistics agency Destatis.

Carsten Brzeski, head of macro at the ING bank, said that German inflation would likely “accelerate further in the coming months” as the war in Ukraine continues.

Many people in Germany are turning to second-hand products as a way of saving money and being more sustainable.

“Second-hand shopping has become socially acceptable,” said Kai Hudetz, Managing Director of the Institute for Retail Research (IFH). “Nobody is ashamed of it anymore – no matter how fat their wallet.”

“I can save money by buying second-hand products in times of high inflation,” he said. “I thus avoid the delivery bottlenecks caused by the worldwide logistics problems, because the products are immediately available. And I act in a sustainable way, because reusing them is much more environmentally friendly than buying new ones.”

“The current price increases and supply bottlenecks are boosting the second-hand business as a whole,” he said.

The biggest impact, he said, is on electronic products such as laptops and smartphones.

READ ALSO: How to master second-hand shopping like a German