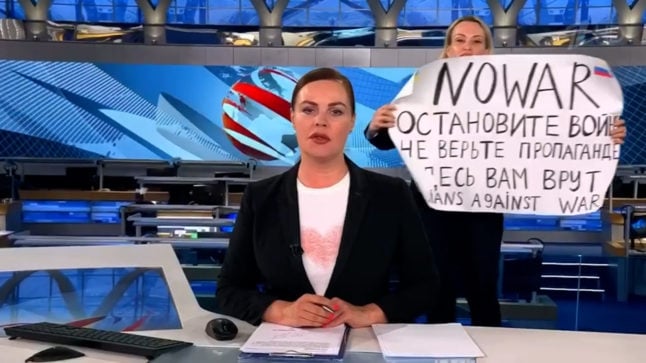 Ovsyannikova, 43, “is now a freelance correspondent for Die Welt, reporting from Ukraine and Russia, among other places”, the newspaper said in a statement.

She will write for the newspaper as well as being a regular contributor to its TV news channel, it said.

Ovsyannikova, an editor at Russia’s Channel One television, barged onto the set of its flagship Vremya (Time) evening news in March holding a poster reading “No War” in English.

It was a highly unusual event in Russia where state media is strictly controlled.

After her protest she was detained and questioned for 14 hours before being released and ordered to pay a fine of 30,000 rubles ($280).

But she could face further prosecution, risking years in prison under draconian new laws.

The case drew international attention and raised alarm over press freedom in Russia in the wake of President Vladimir Putin’s decision to send troops to into Ukraine.

READ ALSO: A foreigner’s guide to understanding the German press in five minutes

Ovsyannikova said she was quitting her job but did not accept an offer from President Emmanuel Macron of asylum in France, saying she wanted to stay in Russia.

Ulf Poschardt, editor-in-chief of Die Welt, praised Ovsyannikova’s “courage at a decisive moment” and said she had “defended the most important journalistic virtues — despite the threat of state repression”.

Ovsyannikova said Die Welt “stands for what is being defended so vehemently by the courageous people on the ground in Ukraine right now: for freedom”.

“I see it as my task as a journalist to stand up for this freedom,” she said.