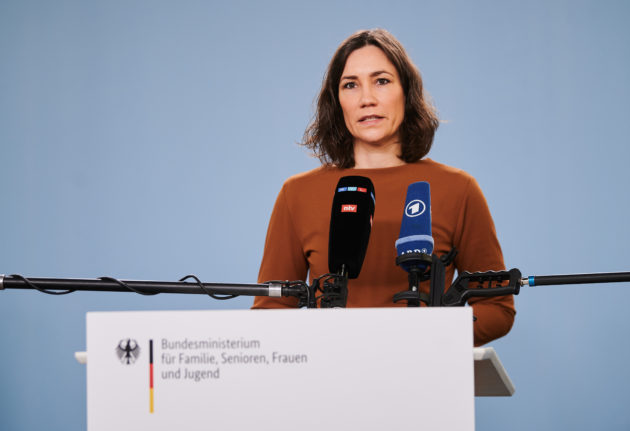 Anne Spiegel said she had decided to step down “because of political pressure”.

“I am doing this to avert damage to the office, which is facing great political challenges,” she said in a statement.

The 41-year-old took on the family portfolio in December when her ecologist Green party joined a new coalition government led by Chancellor Olaf Scholz of the Social Democrats.

Spiegel’s departure comes after an emotional statement on Sunday in which she apologised for taking a four-week vacation to France with her family, 10 days after the western regions of Rhineland-Palatinate and North Rhine-Westphalia were hit by catastrophic floods that killed over 180 people.

Spiegel was the environment minister in Rhineland-Palatinate at the time.

The vacation only recently came to light in media reports.

A tearful Spiegel had sought to defend the trip by saying her husband had suffered a stroke in 2019 and needed to avoid stress, while the pandemic and her own workload juggling numerous regional roles had weighed heavily on their four young children.

“I decided I had to be there for my family,” she said on Sunday.

Spiegel added that she had worked tirelessly in the days before the vacation to help the affected areas, and that she remained reachable during her holiday.

Spiegel acknowledged however that she did not take part in cabinet meetings during the vacation, despite what she had said previously.

Opposition politicians had led calls for Spiegel to go, with the leader of the centre-right CDU party, Friedrich Merz, accusing Spiegel of caring more about her “vacation and her own image than the fate of people in the Ahr region”.

Chancellor Scholz said he had “great respect” for Spiegel’s decision to resign and that he had been “moved” by her personal statement.

The two departures come against a backdrop of public discontent with Germany’s handling of the floods.

As well as being the deadliest in the country’s modern history, the deluges destroyed roads, bridges and thousands of homes and businesses. The mammoth reconstruction task is still ongoing.

The scale of the devastation has in part been blamed on a lack of warnings to residents ahead of time, despite weather services forecasting heavy rainfall.