A partial vaccine mandate comes into force in Germany this week, affecting health and care staff. Here's what you need to know.

From March 15th, health and care workers in Germany have to prove they have been vaccinated against Covid-19 or have recovered. If they can't provide this proof they face fines or bans from working - but states are not likely to enforce this immediately.

The regulation covers employees in hospitals as well as care homes, day clinics, emergency services, doctors' surgeries and disability centres. Everyone working in affected facilities and companies has to submit proof to management by the end of the day on Tuesday.

Staff in these areas will also have to show proof of their Covid status in future to their local authority if requested to do so.

Meanwhile, bosses will be unable to employ staff who have not been vaccinated or recovered.

There is an exception for those who can't be vaccinated for medical reasons. They can show their employers a certificate from their GP.

The government says it wants to protect particularly vulnerable groups, and that a high vaccination rate is essential in these areas

The bill says that staff in health and caring professions have a "special responsibility" because they have intensive and close contact with "groups of people at high risk of severe or even fatal Covid-19 disease progression".

Will there be a vaccine mandate for everyone in Germany?

Perhaps. Last week Austria said it was suspending its plan for a general vaccine mandate for all adults because of the milder symptoms associated with the Omicron variant of Covid-19.

Several models are on the table - including a proposal for a vaccination obligation for all adults. The Bundestag will debate them for the first time this week.

The so-called facility-based compulsory vaccination for health care and nursing professions was pushed through earlier. In mid-December, the bill put forward by the governing coalition - made up of the Social Democrats, Greens and Free Democrats - was passed with a broad consensus of 571 MPs.

The Bundesrat, where the governments of the 16 states sit, approved it.

The partial vaccination obligation has been seen as a kind of transitional solution on the way to general compulsory vaccination.

But the debate on any kind of compulsory Covid-19 vaccination is a tough one - and very controversial. In Germany, it is fuelled by a comparatively low vaccination rate, in comparison to most other European countries.

But critics say it isn't needed in view of the Omicron variant's reduced severity. 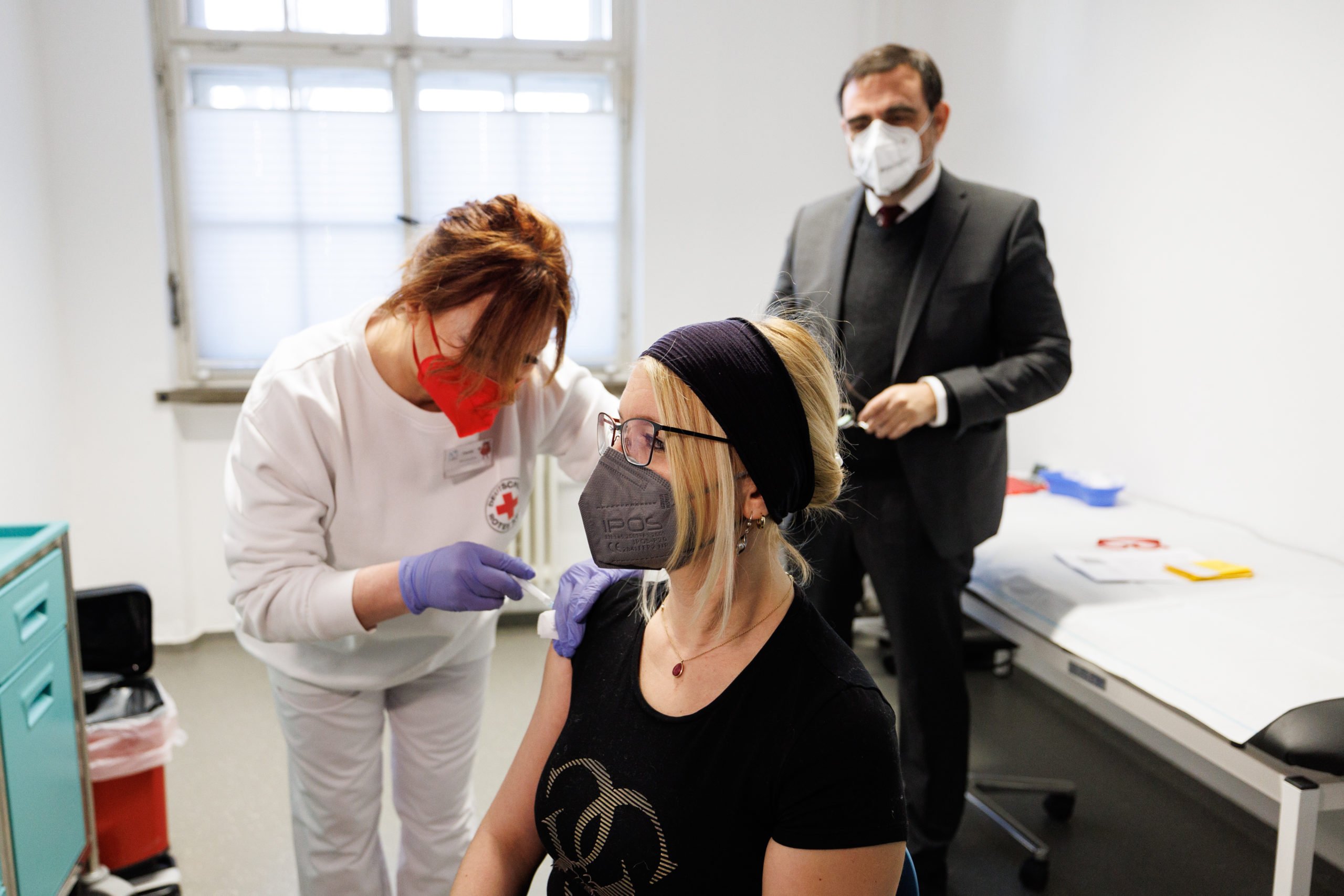 How will the partial vaccination obligation be implemented and controlled?

The federal states are responsible for implementation - and there are different approaches. But throughout German regions, the process that could lead to people losing their jobs will take some time.

In many areas, health authorities are checking carefully whether patients can still be cared for if unvaccinated people are banned from entering.

This is the case in Berlin, for instance. The vaccine mandate is implemented under consideration of the supply of staff. This means that health authorities assess how much health care could be at risk and they can suspend compulsory vaccination if necessary.

In Mecklenburg-Western Pomerania a procedure with a hearing will take place for affected staff, followed by a discretionary decision.

In Saxony, health authorities are to check carefully whether care homes and hospitals can still operate before banning unvaccinated employees from the premises. Some districts have said that the individual case examinations are likely to drag on into the summer.

Meanwhile, in Baden-Württemberg, employees concerned will probably be given a deadline of two weeks to present the proof.

Bavaria will put in place a graduated plan - health offices are to give those affected the chance to reconsider their decision. The offer of counselling will then be followed by a formal request to submit the legally required evidence. If this is not done, workers will face a fine. A ban on unvaccinated staff will be the final measure.

How high is the vaccination rate in the health sector?

Reliable nationwide figures on the vaccination rate of health and nursing staff are not available. Estimates say between 70 and 90 percent of staff are now vaccinated, depending on the region and facility.

According to a non-representative RKI survey, the vaccination rate was around 81 percent in old people's and nursing homes up until autumn last year.

What do courts say?

True to form, Germany has already seen several court cases over Covid laws. And the mandate is no different.

The vaccination obligation has already triggered a wave of lawsuits. In February, news agency DPA reported about 74 constitutional complaints by about 300 plaintiffs.

An urgent appeal against the law has since been dismissed, but this does not mean that compulsory vaccination is fundamentally constitutional. If the law is declared unconstitutional, employers would have to pay their exempted unvaccinated employees their withheld wages, German lawyer Nathalie Oberthür has said.

However, it's unclear if employees who have been sacked could get their jobs back.

Is there a lot of pushback?

Yes - regular protests drawing thousands of people are held in Germany against any form of vaccine mandates.

There are also concerns over how health offices will be able to cope with the extra bureaucracy involved with monitoring staff's Covid vaccination proof and possible dismissal.

Meanwhile, authorities are also worried about losing members of staff in sectors where workers are already spread thinly.

No. In France, compulsory Covid-19 vaccination has already been in force since mid-September for employees in hospitals, old people's and nursing homes, care services as well as for employees of emergency services and fire brigades. Italy, Britain and Greece have also had compulsory coronavirus vaccination for healthcare workers for some time.