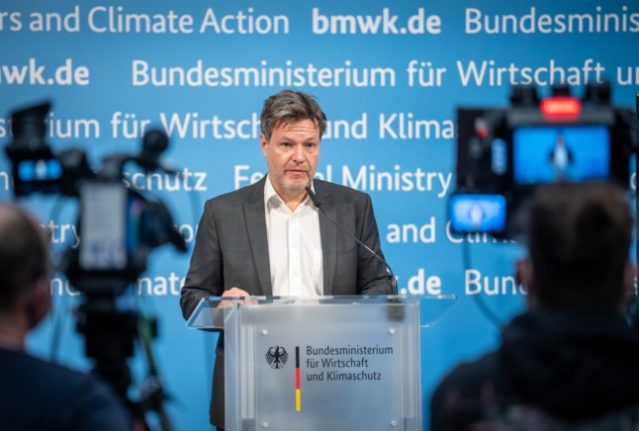 The fallout from the war is likely to derail Germany’s hoped-for economic rebound in the second quarter of 2022 on the back of eased coronavirus curbs, Habeck told reporters.

“The impact of the sanctions and of the war on all sectors of the economy is so strong that we can fear a big impact,” he said.

But despite the “difficult business climate”, Habeck praised companies for backing the sanctions and supporting the international response against
Moscow’s aggression.

The United States and European allies have imposed sweeping sanctions aimed at isolating Russia from the global financial and trade system, including punitive measures targeting businesses, banks and billionaires.

German car giants Volkswagen, Daimler and BMW have announced that they are suspending operations in Russia as a result, while plants in other countries are being idled as the fighting in Ukraine disrupts supply chains.

READ ALSO: How Russian sanctions could affect travel to and from Germany

“We must be grateful for the fact that all the companies I have spoken to, both in the US and here, fully support the sanctions, even though it is a considerable burden for them, even though employees are affected and the situation is tense,” Habeck said.

“German firms have invested around 20 billion euros in Russia,” he said, of which only around 7.4 billion euros was covered by insurance.

The German government would make cheap credit available through its public lender KfW to help compensate for some of the losses, he added.

Habeck also warned of the impact of rising energy costs and disruptions in the delivery of certain raw materials, at a time when Germany, like the rest of Europe, is already grappling with soaring inflation.

After the lifting of pandemic restrictions and a gradual easing of the supply chain woes that had plagued global trade, “we had all hoped that we
would experience an economic upswing this spring” that would return the German economy to its pre-pandemic level, Habeck said.

But Germany now has to factor in “the consequences of the war”, he said.

“And it must be said once again that it is Vladimir Putin alone who has burdened the global community with these consequences,” he added.