REVEALED: How much it costs to rent a room in a German university town

The cost of renting a room in a shared flat in one of Germany's 97 university towns is higher than ever before - though there are major regional differences, a new study suggests.

According to the study 'University Town Scoring 2021', people renting a room in a student hotspot currently have to shell out an average of €414 in 'warm' rent, meaning rent plus service charges and energy bills.

The Moses Mendelssohn Institute - who conducted the study - looked at around 25,000 advertisements for rooms in shared flats in 97 university towns across Germany between December and February.

They found that rents for students and other young people in these areas were higher than ever before.

Two years ago, the average warm rent for a room in a university town was €389 per month.

There are enormous differences in rents across different regions though - particularly across eastern and western university towns and in the major cities.

Unsurprisingly, Munich, which is home to the prestigious Ludwig Maximilian University, topped the scoreboard as the city with the highest rents for rooms in shared flats.

In the Bavarian capital, students and other young people renting a room are currently expected to shell out a whopping €680 per month for their warm rent - far higher than any other university town in Germany.

The second most expensive city for room rentals was Frankfurt am Main, with average warm rents of €550 for a single room. In joint third place were Hamburg and Berlin, where single rooms cost €500 per month on average.

Outside of the capital, where rents have been soaring in recent years, flat-share tenants in other parts of eastern Germany can expect to pay around half of the average rents in the major cities.

In the university towns of Freiberg, Mittweida und Chemnitz in Saxony, for instance, an average room in a shared flat will set you back €256 per month, including bills.

The cheapest city in the rankings, however, was Brandenburg's Cottbus, where warm rents for a single room are just €230 a month.

Though average rents have gone up in recent years, experts say the price hikes have been dampened slightly by the pandemic, which has provided some relief on the housing market in some areas.

With online teaching becoming the norm in most universities at the height of Covid-19, many students were discouraged from looking for rooms in their university town and instead opted to save money by staying at home with their families. 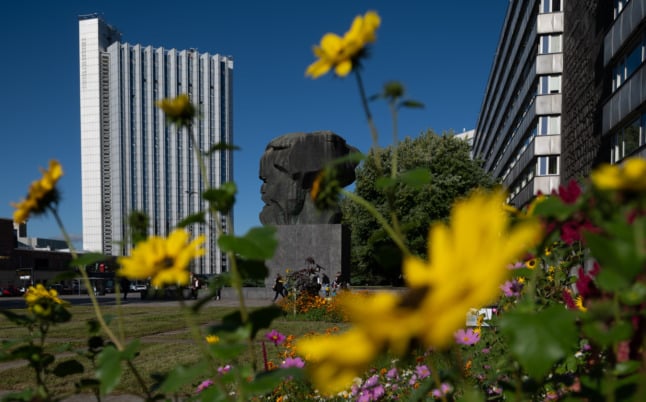 The Karl Marx Monument and high-rise flats in Chemnitz, Saxony. Chemnitz is one of the cheapest places in Germany to be a student. Photo: picture alliance/dpa/dpa-Zentralbild | Hendrik Schmidt

This initially dampened rising rents and even led to prices going down in some of the university towns that were studied.

Since last autumn, however, researchers have observed a trend reversal as universities returned to in-person teaching.

At the start of the winter semester, an above-average number of students decided to look for accommodation at their university location, driving up demand.

According to researchers at the Moses Mendelssohn Institute, the effects weren't just felt in the major cities, but also in rural areas and smaller towns.

Annegret Mülbair of the housing portal wg-gesucht.de told Spiegel she had observed "an increase in demand of 21 percent on an unchanged limited supply" of housing since October. This has led to a significant jump in asking rents.

Stefan Brauckmann, the director of Moses Mendelssohn Institute, said he saw the trend reversal as the "beginning of a clear wave of price increases".

This is partially due to the fact that some students are forced to study longer than originally planned due to exam and class cancellations and the knock-on effect of online tuition.

On the other hand, rising energy prices are continuing to drive up the cost of warm rents.

Though the government has planned to provide financial support for struggling households in the form of an energy allowance, students receiving the BAföG maintanance grant will receive less than people on other types of state benefit.

Nationwide, just under a third of students live in a shared flat, while around 38 percent live alone or with a partner in a regular flat.

Meanwhile, only a small minority of students are able to find a place in the more affordable student halls of residence: according to the Studierendenwerk, the national average is only 8.9 percent.