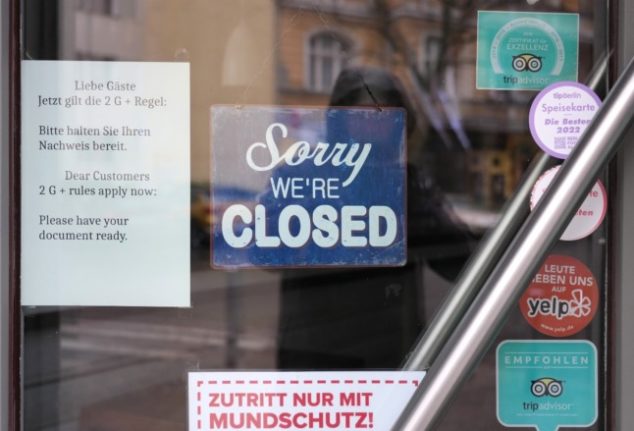 A restaurant in Berlin with a sign telling customers about the 2G-plus rules. Photo: picture alliance/dpa/dpa-Zentralbild | Soeren Stache

“I hope that many protective measures can be withdrawn in March,” the FDP politician told the Rheinische Post on Wednesday.

The prerequisite for this is that “the number of cases will fall again from mid-February”, as predicted by the Robert Koch Institute (RKI).

He also said that any new virus variants would change the situation.

However, top virologist Christian Drosten warned that the situation between Denmark – which eased all restrictions this week – and Germany cannot be compared one-on-one.

He said Denmark had achieved higher vaccination coverage than Germany.

“One thing that has not changed is the vaccination gap (in Germany),” Drosten told the NDR ‘Coronavirus Update’ podcast. “The vaccination rate in Germany has even dropped again recently.”

Drosten said he expected restrictions in Germany to continue until Easter, which falls in mid-April.

“We clearly have evidence that the transmissions in Germany are currently being fed by school activities,” said Drosten. “The Easter holidays will put a stop to that at the latest.

“Furthermore, it will be warmer after Easter and the incidence will probably not pick up as much.”

Drosten said the new subtype of the Omicron variant – BA.2 – is causing uncertainty. It is still not widespread in Germany, but data from Denmark suggests the subtype could spread even more easily than the original, said Drosten.

Germany is seeing a spike in infections amid the Omicron wave, but hospitalisations are not rising as steeply as in previous waves. Experts say the Omicron variant of Covid-19 generally causes milder illness in people.

On Wednesday, Germany reported 208,498 infections and 196 deaths within the latest 24 hour period.

Chancellor Olaf Scholz and state leaders decided to extend Germany’s strict Covid rules that include a ban on unvaccinated people taking part in most of public life, and require vaccinated/recovered people to show proof of a booster shot or negative test to enter many places. Clubs are also closed, and there are contact restrictions in place.

Leaders are due to meet again on February 16th, but calls have been growing louder in recent days demanding a plan for Germany to reopen public life soon.

Bremen’s mayor Andreas Bovenschulte (SPD) said he didn’t think restrictions should be relaxed right now – but argued that it had to be talked about.

“Since we have a stable situation in the hospitals at the moment, I think it is the right time to discuss relaxations – not yet to implement them,” he said.

For Bovenschulte, Denmark’s approach is “too bold a step”, but he said there is a need for action “at an appropriate speed”.

Alexander Dobrindt, head of the CSU parliamentary group, called for decisions on easing Covid rules before the end of February.

He told German daily Welt that hospital occupancy must be the guiding yardstick for policy.

“We still need measures like the mask requirement. But we have to present a perspective to reduce the restrictions of daily life bit by bit – in trade, in gastronomy, in culture, sports, leisure,” said the CSU politician.

Head of the German Hospital Association (DKG), Gerald Gaß, supported relaxations being discussed, but warned: “That doesn’t mean that openings should be made now.”

There could only be relaxations when the peak of the Omicron wave had passed, and hospitals were not overburdened, Gaß told the Rheinische Post. “At the moment it looks good.”