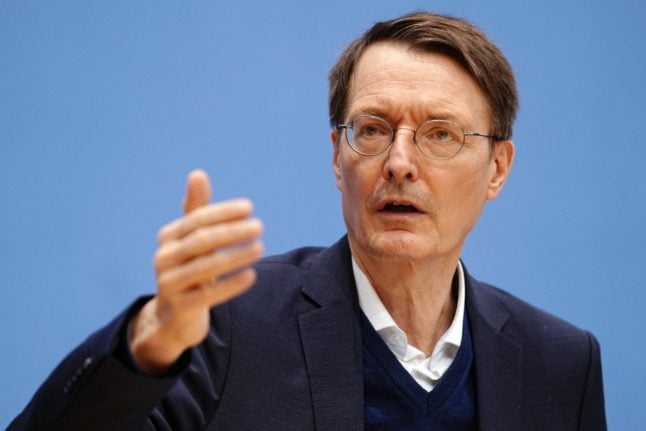 In order to immunise as many unvaccinated people as possible ahead of a possible new Covid wave in autumn, mandatory vaccinations would have to come into force soon, Lauterbach said.

“If we want to propose a motion that still works, then that’s a motion that puts compulsory vaccination into effect… in April or around April, maybe in May,” Lauterbach told the German news programme RTL Direkt on Tuesday evening.

Lauterbach and German Chancellor Olaf Scholz (both SPD) are in favour of a general vaccination requirement, but there are already many opposing voices.

The Chairman of the Board of the National Association of Statutory Health Insurance Physicians (KBV), Andreas Gassen, said doctors shouldn’t be forced to carry out mandatory jabs.

“We will not expect our doctors to carry out compulsory vaccination against the will of the patients,” Gassen told Bild newspaper.

“The practices are not a place to enforce state measures, but rather they are about the relationship of trust between doctor and patient.”

Speaking to The Local in December, FDP health expert Dr Andrew Ullmann said that no-one would be physically forced to have the Covid-19 vaccine under mandates, but vaccine refusers could face a fine if they can’t provide proof of being vaccinated in certain situations (for example, in the workplace).

How will vaccine mandates be debated?

There is no planned government proposal from the coalition on a general vaccine requirement. Instead, cross party groups are to bring motions on the issue to parliament.

MPs will then debate and decide in the coming weeks. They will be permitted to vote against their own party line in what’s known as a vote of conscience.

“I am of the opinion that the German Bundestag should vote on general compulsory vaccination against coronavirus in March after thorough consultation,” Green Party health expert Janosch Dahmen told Redaktionsnetzwerk Deutschland (RND).

To keep this time frame, “it would make sense to discuss the group motions for the first time in February,” he added.

The first debate will take place in the Bundestag next week.