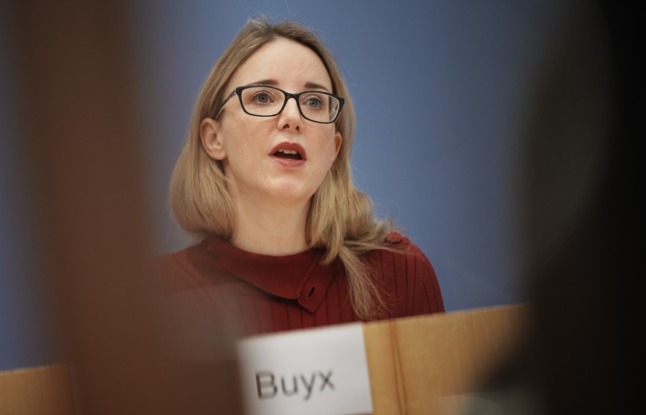 In a recommendation published on Wednesday, the German Ethics Council has come out in favour of extending the recently adopted compulsory vaccination for staff in healthcare institutions to “significant sections of the population”.

A total of 20 of the council’s 24 members voted in favour of the recommendation, while four voted against it.

The statement marks a turnaround for the panel which advises the federal government on ethical, societal, scientific, medical and legal issues. Until now, the Council had always rejected a general vaccination requirement.

The Ethics Council had been asked by the federal and state governments for an assessment on the issue of mandatory jabs, because the Bundestag is likely to have a vote on a general vaccination requirement at the beginning of next year.

An initial, limited Covid vaccination obligation was already decided on in the middle of December, meaning that employees in facilities with vulnerable people, such as clinics and nursing homes, will be required to submit proof of vaccination or recovery by March 15, 2022.

The Council has reconsidered its standpoint on a more general vaccine mandate, in view of the changing evidence base.

It is also unclear whether an even higher vaccination rate may be required in light of the new Omicron variant.

Another change is that it is now clear that protection against infection diminishes over time and that even vaccinated people can pick up and transmit infections. The high number of infections threatens to overburden the healthcare system, experts warn.

READ ALSO: Q&A: ‘I was against vaccine mandates in Germany – until hospitals became overwhelmed’

Would compulsory vaccinations be legal?

The Ethics Council also looked at the question of whether making vaccinations a legal requirement would be compatible with the German constitution.

They said that introducing such “measures to protect other people or the general public are possible in principle under constitutional law”.

The Council included a series of measures that would be required to allow for a vaccine mandate in its recommendation.

For example, a nationwide infrastructure with easily available vaccinations would have to  be on offer and, as far as possible, people should be able to choose which vaccine they take. The implementation of compulsory vaccination using physical force (“forced vaccination”) must be ruled out.

German politicians have previously stated that under possible vaccine mandates, people would be fined if they refused them and never forced to take a vaccine.

The experts also propose the establishment of a data-secure national vaccination register and direct invitations for vaccination.

Children in this age group should be given a one-time jab with an mRNA vaccine, preferably with BioNTech/Pfizer, STIKO said on Tuesday.

Up until this point, STIKO had only recommend that children aged five to 11 with pre-existing conditions, and those who have contact with at-risk individuals, be given Covid shots – although healthy children were able to get jabbed if their parents organised it with a doctor.

Experts said the majority of children have likely had a Covid infection. They estimated that 77.5 percent of 5-11 year olds have had at least one contact with the virus.

For this reason, children aged 5-11 are only recommended to receive one Covid 19 vaccine dose for the time being, the standing committee said.

In order to make the vaccine suitable for young children, Pfizer/BioNTech has developed a lower-dosed version of its Covid vaccine.

STIKO also said children aged six and older could get a Moderna jab.

The vaccination should be administered at least three months after a known infection, the recommendation states.

The recommendation has been made as a precautionary measure because a renewed increase in Covid infections is expected in autumn and winter, STIKO said.

“The initial one-time vaccination aims to build up as good a basic immunity as possible now,” experts said.

In Germany, just under 20 percent of 5-11 year olds are vaccinated.

STIKO said that children who have already received two jabs shouldn’t receive another shot at the moment.

But for children with underlying illnesses or who have contact with at-risk groups, STIKO confirmed the recommendation of basic immunisation with two doses as well as a booster jab on top of those.

A general vaccination recommendation in Germany has been in place for children over the age of 12 for some time, while no Covid vaccine has yet been approved for children under five.