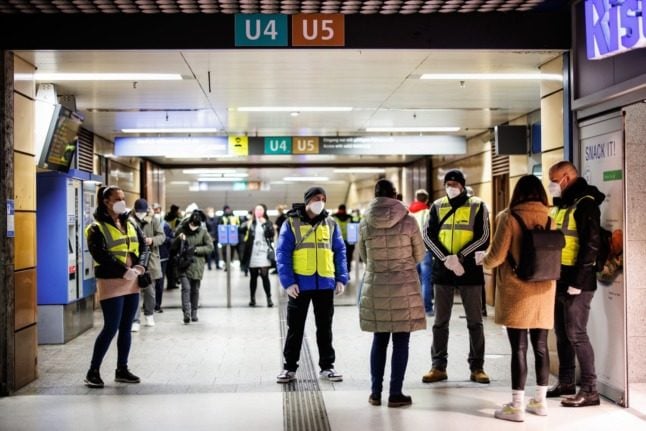 The reform to the Infection Protection Law, which was passed on November 19th, comes into force on Wednesday, introducing sweeping measures to combat the Covid fourth wave.

For which means of transport does 3G apply and from when?

The 3G rule will apply on all public transport – local and long-distance – from Wednesday, November 24th.

This means that national and suburban trains, buses and trams as well as buses and trains operated by private providers such as FlixBus will be affected.

Exceptions will only be made for taxis and school buses, children under the age of six and schoolchildren who are tested at school.

How will passengers be checked?

The new law states that the carriers – for example, Deutsche Bahn or the local transport companies – are obliged to monitor compliance with the regulation by means of spot checks.

It is therefore up to the transport providers to decide how they will implement the controls. It’s likely that 3G proof will be checked together with tickets or, depending on the means of transport, when boarding.

Deutsche Bahn, for example, only wants to check 3G compliance on a random basis, and are planning checks on 400 long-distance connections in the first few days. FlixBus and FlixTrain have also announced that they will carry out random checks.

On local transport, area-wide checks are simply not feasible and 3G checks may be checked just as sporadically as tickets. Transport companies have to decide whether to burden inspectors with this additional task, or simply to carry out focussed checks together with the authorities, as has already been done to enforce the mask requirement. Munich’s MVG says its ticket inspectors will now also check 3G proof and the Hamburg transport association has also announced that 3G proof is to be randomly checked during ticket inspections.

What are the penalties?

The exact cost for breaking the 3G rule on public transport is not yet known, though according to the federal government’s website: “Anyone found without valid proof will face a fine of up to several thousand euros.”

As with other violations of the Infection Protection Act, each federal state will decide on the level of fines for itself. Non-compliance with the mask requirement, for example, will cost 150 euros in Bavaria and only 25 euros in Mecklenburg-Western Pomerania. If a train is traveling between federal states with different fine levels, then the guidelines of the federal state in which the violation is discovered will usually apply.

If passengers on a bus or train don’t want to show the 3G proof, inspectors can ask them to get off at the next station, as it is usually stated in the terms and conditions of transportation that passengers who endanger safety can be excluded from carriage. If a customer refuses to exit the mode of transportation, employees can call the police and police can initiate the fine procedure.

Transport companies would also have the option of including 3G in their conditions of carriage. In this case, the employees themselves would be able to impose fines, as they do for riding without a ticket. This is what some companies, such as the Hamburg public transport association, have done with compulsory mask-wearing. In the case of municipal transport companies, however, it can take a while to change the conditions of carriage.

The idea of including mandatory masks in transport conditions nationwide was rejected by the state transport ministers’ conference in September 2020, seeing fines as the responsibility of the police and the public order office.

This is presumably how most transport companies will see it with the 3G rule too, and leave it to spot checks together with the authorities.