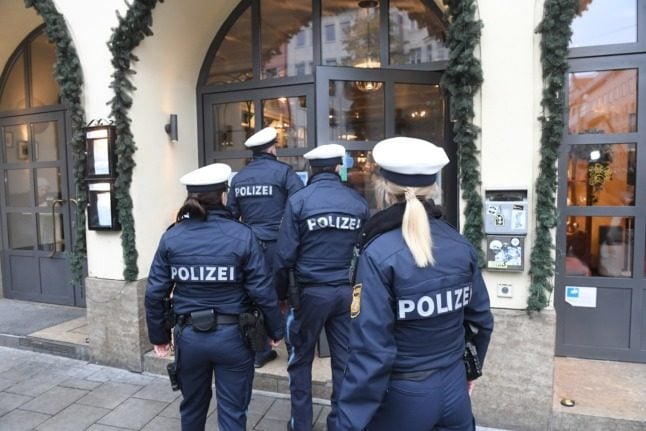 What is the Covid situation in Bavaria?

Bavaria has been struggling with rising Covid infections and increasing pressure on intensive care units.

The state’s hospital traffic light warning system is at red – the highest level – which means there are strict Covid regulations. On Tuesday the rules were tightened further.

Bavaria’s traffic light switches to red when more than 600 intensive care beds are occupied by Covid-19 patients. On Tuesday, the number of Covid infections registered in the state reached 554.2 per 100,000 people within seven days – far higher than the nationwide 7-day incidence of 312.4.

State premier Markus Söder (CSU) said there was no choice but to implement a “a kind of lockdown for the unvaccinated” due to the increasing pressure on hospitals and medical staff.

In a press conference in Munich on Monday, Söder said it was the “week of truth” and the last chance to take measures before the situation gets out of control.

Söder also urged everyone in the state to reduce their social contacts.

What are Bavaria’s new rules?

Under the state’s new regulations, the so-called 2G rule applies in almost all public spaces from Tuesday.

That means only people who are vaccinated (geimpft) or have recovered from Covid in the last six months (genesen) can access many public facilities, including cultural, sports and leisure facilities.

This includes gyms and sports facilities, theatres, cinemas, museums, zoos, swimming pools, cable cars, as well as clubs and brothels. Organisers and operators are tasked with checking for proof of vaccination or recovery certificate.

Police are carrying out spot checks on establishments, with fines for those who don’t comply.

Previously, unvaccinated people could enter many public places under the 3G rules – which meant they could show proof of a recent negative Covid test (the other G being ‘getestet’).

Under the tightened rules, unvaccinated people in Bavaria are also banned from visiting restaurants and hotels.

It comes after Berlin brought in 2G rules on Monday. The eastern state of Saxony is also excluding unvaccinated people from many areas of public life.

Are there any exceptions?

Children under the age of 12 are exempt from the 2G access restriction. People who cannot be vaccinated for medical reasons can be granted access if they present a written medical certificate and show a recent negative PCR test.

For pupils over 12, the 2G rule applies – regardless of the regular tests they have to take at school.

After some criticism, however, the state government decided on a transitional regulation that allows unvaccinated 12 to 17-year-olds to do sports, musical or theatre activities without having to be fully jabbed until the end of the year (the 3G rule will apply here).

Are there any other rules to know about?

Yes. FFP2 masks are compulsory in lots of places again, even in 2G spaces.

That means that at events or in places like cinemas, people have to wear a FFP2 mask unless a minimum distance of 1.5 metres can be maintained.

While at a restaurant or bar, guests can remove the FFP2 mask while they are sitting down.

The mask requirement for mandatory 2G has also been extended to events with more than 1,000 people outside.

In other parts of public life, compulsory FFP2 masks have been in force for some time, including in shops, public transport and at religious services.

A medical mask (usually blue coloured) is only permitted for children and young people aged six to 15. Younger children do not need to wear a mask. At school, primary school pupils can also wear a cloth mask. At secondary schools, a medical mask is mandatory regardless of age.

Germany has been talking about another G rule – the 2G-Plus. That means that vaccinated and recovered people have to take a test before entering certain public areas.

This is not common at the moment, but the outgoing Health Minister Jens Spahn said last Friday he wants to see this be introduced for public events across the country.

And now Bavaria is giving operators of clubs and similar venues, the choice to opt for a 2G-Plus model – this is also a new addition to the rules.

If the venue operators pick this option, guest don’t have to wear FFP2 marks during the event.

Bavaria leader Söder had originally planned mandatory 2G-Plus rules, but he said it’s not legally possible at the moment.

The so-called 3G-Plus rule will remain for body-related services like going to a beauty salon. Customers have to show a negative PCR test as well a vaccination certificate or proof of recovery.

3G at universities and libraries

For the time being, unvaccinated students can still use a negative rapid test to gain access to universities, “extracurricular educational services including vocational training, further and continuing education” as well as libraries and archives under 3G rules.

But this isn’t the case everywhere: the Friedrich-Alexander University of Erlangen-Nuremberg (FAU) has become the first Bavarian university to decide that only vaccinated students, and those who have recovered from Covid, will be allowed into the lecture hall.

3G in the workplace

At the red warning level, a 3G obligation applies to all workplaces with more than 10 workers (including the owner) for employees who have contact with other people during their working hours.

They must either be fully vaccinated, recovered, or provide a negative Covid test twice a week.

At the moment anyone can enter public transport and shops without having proof of vaccination, recovery or testing.

But this may change in future. As The Local has been reporting, the outgoing government – and the parties in talks to form a new coalition government – are discussing proposals to bring in a 3G requirement for public transport.