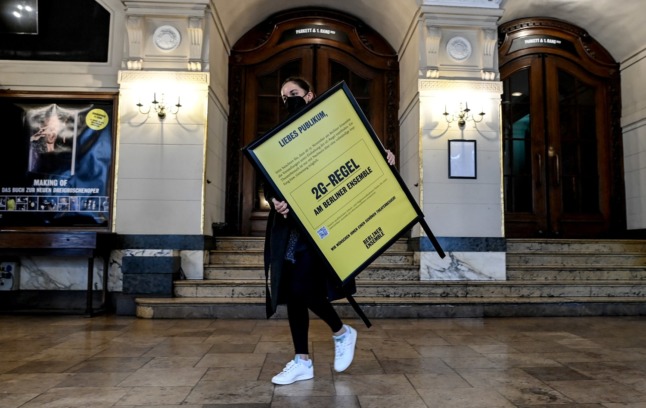 An employer with the Berliner Ensemble carries a sign that says entry is only allowed for people with proof of vaccination or recovery from Covid. Photo: picture alliance/dpa/dpa-Zentralbild | Britta Pedersen

On Tuesday, November 16th, the southern state reached the critical level of 390 Covid patients in intensive care units for two days in a row. After that, the so-called warning level came into effect, bringing 2G rules into force.

These rules mainly affect people who’ve had the chance to get vaccinated but have so far chosen not to.

It means that access to many public areas is restricted to the vaccinated (geimpft) and people who’ve recovered from Covid (genesen). 2G effectively excludes unvaccinated people from places like cinemas, indoor dining, theatres, galleries and clubs. There are exceptions for children and people who can’t get vaccinated against Covid.

The state previously reintroduced contact restrictions for unvaccinated people. Unvaccinated households are only allowed to meet with up to five other people at one time. This number also excludes children under 17, vaccinated and recovered people and people who can’t get vaccinated for medical reasons.

In addition, three municipalities in Baden-Württemburg introduced a nighttime curfew on the unvaccinated from November 22nd. Under the new rules, people in these regions who’ve opted not to get their Covid jabs will be told to stay in their homes between the hours of 9pm and 5am.

Restaurants will stay open but will have to close by 10pm each night, while universities, adult education centres and services like hairdressers that require close bodily contact will use a ‘2G’ entry policy.

In addition, large events will introduce a 25 percent capacity limit and will operate under a ‘2G-plus’ system, meaning only people who are vaccinated or recovered from Covid and have a negative Covid test can enter.

Contact restrictions are also returning for the unvaccinated. Only up to five people from two different households will be permitted to meet over the coming weeks.

In areas with critically high Covid infections – more than 1,000 weekly cases per 100,000 people – non-essential services like hotels, restaurants, bars and cultural facilities will be required to close, while universities will have to switch to online teaching.

Shops in these regions will be permitted to remain open, but must limit the number of customers to allow sufficient space for social distancing.

In the capital, only vaccinated and recovered people have access to bars, restaurants, cinemas, theatres, museums or galleries under the 2G rules. The same applies to leisure facilities such as saunas and the Berlin Zoo.

Children under the age six are able to get into venues with no documentation, while other young people under 18, and those who are unable to get vaccinated for medical reasons can show a negative test instead.

Before the blanket 2G rule was introduced, businesses in the capital were able to decide for themselves whether to use the 2G regulation or 3G. The rules have now been tightened up so that mandatory masks apply everywhere in 2G venues, except while seated. 2G with masks will also now apply to the city’s Christmas markets, which will be kept open in spite of rising infection rates.

In venues that were previous 2G such as clubs, steam rooms and brothels, 2G-plus applies. That means even vaccinated and recovered people will require a test to enter.

Brandenburg, the neighbouring state to Berlin, has brought in 2G rules in some areas of public life. 2G rules in Brandenburg will apply for indoor dining in hospitality, culture and leisure. Again, there are exceptions for people who cannot be vaccinated for health reasons. With a negative test certificate, they too can enter under 2G conditions, but must then also wear an FFP2 mask.

In Bremen, the lowest warning level 0 has been in effect since the end of October. This also means that the 3G rule in indoor areas is no longer in effect. The situation is different in the city of Bremerhaven, which is part of the federal city state, where warning level 1 applies and therefore also the 3G rule. The 2G rule is an option at higher warning levels. Restaurants, theatres, bars, clubs and sports facilities are allowed to apply it.

The Hanseatic city introduced 2G as an option model in August for public facilities such as restaurants, bars, cinemas or theatres. Later, retail and body-related services such as hairdressers were added. Essential services – like supermarkets or pharmacies are exempt from 2G, as well as educational institutions and social participation facilities. If there is a significant increase in Covid cases in hospitals, Hamburg wants to extend the 2G rule to other areas.

From Thursday, anyone who is not vaccinated or has recovered from Covid within the last six months must present a PCR test to take part in 3G events or when entering many public facilities (making it the 3G Plus rule). This applies to public spaces like events, fairs, sports facilities, cultural venues, restaurants and the sex industry. Businesses also have the option of 2G – excluding unvaccinated people from entry.

From Thursday, a stricter 3G rule will apply to nursing homes in the northern state. All visitors over the age of six have to present a negative test or take a test when entering the home – even if they are vaccinated or recovered. In pubs, restaurants and at events, a 2G option model has been in place for some time: if only vaccinated and recovered people have access, some protective measures – like masks – can be shelved. In cinemas, the 3G rule applies.

Like many regions, businesses here have the option of putting in the 2G rule, and the decision is up to the operators. On Tuesday, the state government presented a revised Covid set of rules, which said 2G will become mandatory for indoor events with more than 1,000 people. 2G in indoor dining will also become mandatory at a certain Covid warning level, but this level has not yet been reached nationwide.

The situation differs throughout the state, but in Cologne the 2G rule applied for the celebrations on November 11th – meaning people who were not vaccinated or recovered had to stay at home.

In hospitals, museums or indoor dining, the 3G rule applies in principle in NRW. For discos or carnival events indoors, the 3G Plus rule is mandatory, which means unvaccinated people have to show a negative test.

As we mentioned, keep an eye on developments as rules can differ among cities and districts.

The federal state has the 2G-Plus rule in place. It means that the number of unvaccinated people admitted to certain public spaces is limited, and will be further reduced if, for example, the 7-day incidence or the number of Covid patients goes above certain thresholds.

The smallest state uses the 3G rule for indoor public places, such as in restaurants, leisure facilities and at sporting events. A tightening of rules to 2G is currently not considered necessary.

Saxony has strict state-wide 2G rules in place since Monday, November 8th, due to Covid cases spiralling in the state.

Only vaccinated and Covid-recovered people are allowed into public places such as restaurants, which are now only permitted to open between the hours of 6am and 10pm at night. A number of facilities have also been closed, including nightlife venues such as pubs, bars and clubs and leisure facilities such as libraries and gyms.

In regions with particularly high infections rates of more than 1,000 weekly cases per 100,000 residents, unvaccinated people are subject to nighttime curfews.

Furthermore, FPP2 masks – rather than simply medical masks – are required on public transport.

The Covid traffic light warning system works on a regional level in Saxony-Anhalt. If municipalities exceed a certain number of Covid cases they are expected to tighten Covid rules. In principle the 3G entry rules system is in place, although businesses have the option of using 2G.

In the northern state of Schleswig-Holstein, 3G rules apply in the workplace from Monday, while 2G rules are being put in place for all indoor public spaces, effectively barring the unvaccinated from cinemas, pubs and restaurants.

Different access rules apply depending on the district in Thuringia. Some areas use 3G-Plus (PCR test) for entry to restaurants and events, in other regions, a rapid test is sufficient (3G rules). On Tuesday, health minister Heike Werner announced the introduction of a state-wide 2G model. Details are to be discussed in the coming week.

We aim to report the most up-to-date news at The Local. But due to the developing situation it can challenging to keep track of changes. Check with your local state and district for any clarification.