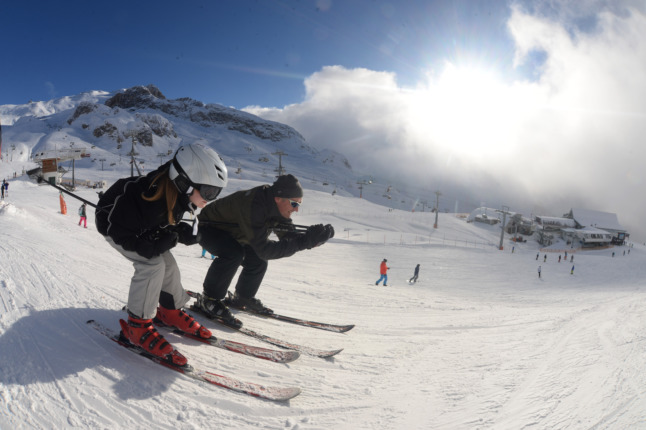 Last year was a disappointing one for many winter sports lovers. With the pandemic raging across Europe, many beloved alpine ski resorts in and around Germany remained empty.

This year, the excitement is palpable: most resorts are set to reopen, albeit with new hygiene and Covid protection measures in place.

READ ALSO: COMPARE: What Covid rules are in place for the ski season across Europe?

According to a recent YouGov survey, one in five Germans are planning a winter holiday this year – and two thirds of them are heading for the slopes. But when do each of the ski resorts reopen – and how have prices changed this year?

In the Silvretta Montafon, the ski lifts could start whirring into action as early as November 12th this year, weather permitting. The old Valisera lift was replaced in summer with a larger one (Valisera II) surrounded by a hotel, restaurants and a giant underground car park. The Golmerbahn is also on its way with new eight-seater gondolas. Thankfully, these major renovation projects haven’t led to steep price increases this year: the Montafon Brandnertal Card for six days rose has only risen by 2.15 percent to €285.

In Ötztal, in the southern region of Tyrol, the glacier ski area around Rettenbachferner and Tiefenbachferner in Sölden has also already opened, and the winter ski areas of Sölden and Gurgl are set to follow suit on November 18th. In their downtime over summer, a covered conveyor belt at the foot of the Rettenbachferner has been developed in order to compensate for the effects of global warming on the size of (and access to) the glacier.

Visitors can also enjoy a new ten-person gondola Rosskarbahn in Gurgl, which replaces a chairlift and takes holidaymakers from the valley to the Festkogl-Alm at 2668 metres in just nine minutes.

On November 20th, the mountain lifts in Kitzbühel will also start running once more. Prices for the six-day pass will rise by 2.7 per cent to €305. From this season onwards, the worldwide Ikon Pass will also be valid in the region for 47 ski resorts from the USA to New Zealand (in Europe, Dolomiti Superski and Zermatt-Matterhorn will also participate in the scheme). Particularly hardcore skiers can also go on the world’s longest ski circuit from Going am Wilden Kaiser to Hollersbach in the Hohe Tauern; it is 80 kilometres long.

The lifts in Ischgl will be back in motion this year from November 25th, and prices are set to rise by 2.2 percent to €323.50. There are no new cable cars in the Ischgl-Samnaun ski area this time, but in response to the Covid outbreaks over the ski season a few years back, the resort has introduced a sophisticated hygiene concept with cold fogging devices in lift cabins and ski buses.

In Skicircus Saalbach Hinterglemm Leogang Fieberbrunn, a sprawling alpine region as long as its name, the winter season will kick off on November 26th this year. Here you can find 270 kilometres of piste spanning two Austrian states, with 70 modern lifts connecting people to the highest peaks and best skiing spots. An Alpin Pass ticket will get you access to all lifts in Skicircus Saalbach Hinterglemm, Schmittenhöhe in Zell am See and the Kitzsteinhorn Kaprun.

The holiday region of Flachau/Wagrain in Salzburger Land, which is known as Snow Space Salzburg, plans to reopen with a new deal for frequent skiers this year. This all-year ticket includes the use of 25 summer mountain railways from May to May as well as the entire range of lifts and slopes in winter, but how much value for money it offers all depends on how regularly you plan to use it this season.

For people who plan to go just once or twice this season, the price of a six-day Ski Amadé ski pass has gone up by 4.55 percent to €299 euros for six days.

When the lift starts on November 27th, the ‘Flying Mozart’ gondola lift will be used for the first time, whizzing up 970 metres in altitude to the Grießenkareck in less than eleven minutes and offering heated individual seats, high-end speakers and Wifi. Instead of 2,500 people per hour in the old standing gondola, 4,000 people per hour can be transported by this new lift. In addition, a new ski circuit – the ’12 Peaks Trophy’ has now opened on 46 kilometres of piste stretching from Flachauwinkl-Kleinarl to Zauchensee-Flachauwinkl. On the Kleinarl side, you can now enjoy flexitarian, vegetarian or vegan food at the certified organic “Lumberjack” ski hut.

The turnstiles on the Arlberg ski region will also open unusually late this year on December 3rd, and te price of a six-day ski pass will increase by 4.1 percent to €326. Luckily, holidaymakers will get some compensation for paying this eye-watering price: this year, two new lifts above Lech and Zürs will get skiers to the slopes faster, while the ten-person gondola from Zug to the Zugerberg and the new Madloch chairlift have both been moved to a more user-friendly and easily reachable valley location.

The Zillertal Arena also plans to relaunch for the season on December 17th.

On November 20th, the Trois Vallées (three valleys) ski region in France will reopen to winter sports fanatics. The largest ski area in the world will be hiking the price of its six-day pass by 2.8 per cent to €330. Skiers head up to the slopes at France’s Trois Vallées, the largest ski region in the world. Photo: picture alliance/dpa | David Andre

The ski region of Oberstdorf-Kleinwalsertal, which spans across the German-Austrian border opens for business on December 3rd. This year, prices have crept up by 2.2 per cent to €259 euros for six days.

The Nebelhornbahn, which takes passengers to the Höfatsblick mountain station, is new this year, as well the wheelchair-friendly Söllereckbahn from the car park near Oberstdorf.

The Bavarian Zugspitzbahn plans to open its glacier ski area on November 19th, followed by the Garmisch-Classic ski area on December 11th. Visitors who’ve been away for a while may get a shock when they see the price of the lift passes: this year, prices will rise by a record-breaking 4.9 per cent to €276. Visitors will find a new conveyor belt with a ski tunnel at Kreuzeck, replacing the inconvenient old rope lift from Hochalm.

Saas-Fee in the Valais started the new season on October 30th, complete with a renovated and modernised tunnel in the underground funicular Metro Alpin. The funicular runs from Felskinn to the Mittelallalin, a secondary peak of the awe-inspiring 4,000-metre Allalinhorn. The railway is marketed by the local tour operators as the “highest underground railway in the world”.

In the ski resort of Vercorin, also in the Valais, a new detachable chairlift will allow more time on the slopes from December onwards: from Tracuit d’en Bas you can reach Mont Major in just five minutes. The area will open on weekends from November 20th and daily from December 18th. In the greater St. Moritz area, the Diavolezza glacier ski area has also reopened for the season. The main ski area, Corviglia, will follow on November 27th. The ski pass prices in the entire Engadine are now “dynamic”, which means that the price changes depending on the season, current demand and how far you book in advance – a little like train tickets or petrol prices.

Currently, for example, you pay 45 swiss francs for a full-area day pass on December 2nd, and 81 francs on January 1st. There are no new ski lifts in the entire area.