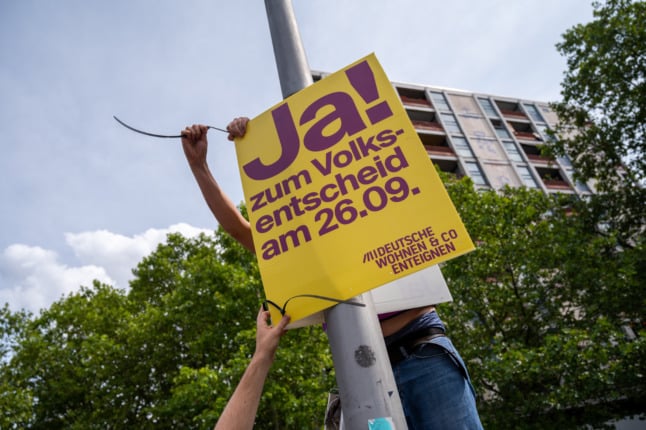 Campaigners hang signs calling for people to vote 'Yes' in the upcoming referendum on whether to bring thousands of private rental properties into state hands. Photo: picture alliance/dpa | Christophe Gateau

Just under four years ago, a handful of activists met together in Berlin to discuss what to do about the city’s soaring rents and ever less hospitable environment for tenants.

The small group – which at the time comprised around 10 people – grew over time into a behemoth supported by hundreds of activists of all nationalities, their iconic yellow and purple posters adorning what feels like every street in Berlin. The Expropriate Deutsche Wohnen & Co (EDW) campaign was born. The end-game: to buy back thousands of properties from the city’s largest landlords and bring them into state hands to ensure better security for tenants and an end to ever-rising rents.

It was a campaign that felt international – an issue that clearly had a huge impact on the so-called Wahlberliner (Berliners by choice) who moved to the city from abroad and had to navigate the often brutal machinations of the housing market. People who, by dint of sounding foreign or speaking another language, felt they were getting a worse deal than their German counterparts.

For a long time, the goal of the EDW campaign was to canvas on the streets, setting up stalls to collect enough signatures to be able to hold a referendum. Eventually, they came back with 360,000 signatures on their petition – enough to get the question put to a referendum twice over.

When the names and addresses of the signatories was looked at more closely, however, it turned out that almost a third of these signatures came from people who didn’t hold a German passport. These ‘invalid’ signatures were promptly scrubbed from the list – though they still had enough for a referendum.

READ ALSO: High costs, long queues and discrimination: What it’s like to rent in Germany Speaking to Tagesspiegel after the signatures had been counted, the campaigners said they had deliberately allowed internationals to sign the form – even though they wouldn’t be allowed to vote when the referendum was held.

“We just wanted to show what a big problem this is in our city,” said Sebahat Aslan, a supporter of the initiative.

When the referendum is put to the people on September 26th, the definition of ‘people’ will be equally select. Only people with German citizenship are allowed to vote in German referendums, meaning almost 825,000 of Berlin’s long-term residents – out of a total 3.6 million people – will be unable to have a say in the fate of the rental market.

This, the campaigners say, is a “huge problem”.

“In Berlin we have, de facto, a three-class franchise,” Expropriate Deutsche Wohnen spokesperson Rouzbeh Taheri told The Local. “That’s interesting insofar as, a hundred years or so in Berlin’s history, they had the Prussian ‘three class franchise’ where people’s right to vote was determined by income.

As Taheri points out, since the UK left the European Union on January 31st, 2020, this category has also included the British.

“That’s a huge problem, because in the meantime that impacts almost a quarter of the adult population in Berlin – 23 percent. In the long term, that can be deadly for a democracy, when such a large part of the population aren’t allowed to vote.”

With their English-language working group, Right to the City for All, the EDW campaign say they want to address this “democratic deficit”.

“Our signatures in support of the Deutsche Wohnen & Co. Enteignen campaign are considered invalid and we can’t vote in the 2021 referendum,” the campaign declares on their website.

“That means we, who often face the worst conditions on Berlin’s housing market, are denied a say over a referendum that could drastically improve our situation.”

A few months ago, we migrants within the campaign set up an English-speaking working group, Right to the City. This ensures that more people can take part in this movement for a Berlin with affordable rents for all. (3/4)⁠ pic.twitter.com/lX7cQVoAKD

In many ways, Berlin and its referendum mirrors the picture in the country as a whole – though the proportion of non-Germans is slightly bigger in the capital.

As Taheri emphasises, the right for foreign nationals to have a say is not EDW’s core campaign, but those 9.5 million people are nonetheless imprinted in their minds like the marks left by those 100,000 or so uncounted signatures.

The backdrop for this situation is, of course, Germany’s strict rules around dual nationality – what Taheri describes as the “backwards nationality law” – which mean that millions of people live in the country for years without ever taking on citizenship or gaining the right to vote.

READ ALSO: ‘We want to have a voice’: How Germany’s tough citizenship rules affect foreigners

Instead, EDW and Right to the City for All suggest a system akin to the one in New Zealand and elsewhere, in which the franchise depends on the amount of time you spend in a country, rather than your nationality. Thousands of Brits are now counting among those who have no say in Germany, even in the local elections. Photo: picture alliance / Britta Pedersen/dpa-Zentralbild/dpa | Britta Pedersen

“We propose that everyone who has lived in Berlin for a certain amount of time should also have the right to vote,” Taheri explained.

Much like their housing campaign, however, they do not expect success to come overnight.

“This will be a long battle, because you have to look at the fact that many of the parties wouldn’t agree to it and always block anything in this direction,” said Taheri.

“The conservative party don’t want it at all – they’re fundamentally against any expansion of voting rights in any direction, they were also against letting women vote for decades, they campaigned against it.

“But even if (voting rights) aren’t part of our core campaign, it is something that all our campaigns promote on a purely democratic level, and it should always be part of our social consciousness.”

Like the ever-persistent dual nationality question, voting rights are often sidelined in Germany because the very people most affected are the same people who have no say.

Nevertheless, Taheri sees a lesson for other campaigners in EDW’s own success story. From a handful of activists gathered in a room four years ago, the radical campaign to take thousands of properties out of the hands of huge corporations into the hands of the state is now being put to a vote on Sunday – and the vote could well pass.

In the latest polls, 50 percent of respondents said they would ‘definitely’ or ‘probably’ vote yes in the upcoming referendum, while 43 percent were against. Supporters of the CDU and FDP also ranked among those in favour, with around 13 percent of each party’s voters saying they agreed with the campaign’s aims. Campaigners hold up numbers representing the number of signatures they’ve collected to hold a referendum – including those from foreigners. Photo: picture alliance/dpa | Christophe Gateau

If the referendum does go through, Taheri says, “it will be an encouragement for all tenants in other cities, but also worldwide, that resistance pays off. That when people get together and do something, they can be successful, even against huge corporations and against the political majority.”

Victory, of course, is still uncertain. But one thing’s clear: when Germans go to the polls on the 26th, the shadow of those unheard in Berlin’s electoral law will loom large in the campaigners’ minds.

Though their signatures were discounted, members of Berlin’s international community have been agents for change behind the scenes, and the 100,000 or so deleted names highlight the discrepancy between those affected by soaring rents and those who have a say.

If all these people did have a say, Taheri says, change would be even more likely.

“We wouldn’t have any concerns about winning at all,” he says.