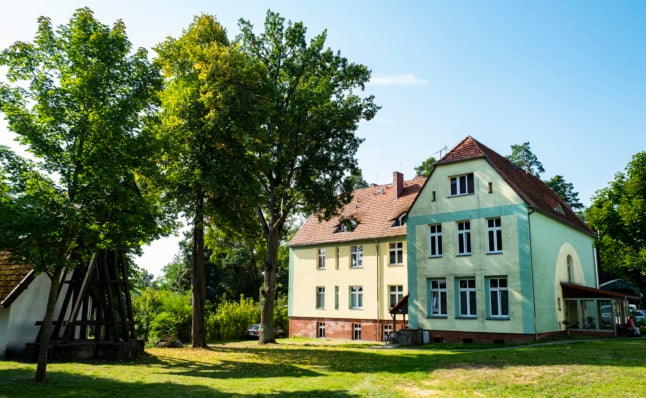 View of the house in which German Chancellor Angela Merkel grew up in, in Templin, taken on September 10th, 2021. Photo: John MACDOUGALL / AFP

The picturesque town of Templin, population 16,000, is celebrating its 750th birthday this year, one year late due to the coronavirus pandemic.

Set in the verdant Uckermark, dotted with glistening lakes hidden in lush pine forests, it’s where Merkel grew up and has served as a sanctuary that helped sustain her in 16 crisis-racked years in power.

Merkel chose one recent late summer day, just weeks before she retires from political life, to pay tribute to her hometown.

“Despite all the state surveillance and the lack of freedom we had,” she said, referring to the authoritarian regime of the former GDR. “I have many fond memories of my childhood and my youth here in Templin.

“This is where I come from, this is where my roots are and they will always be here,” she said to applause from a crowd of about 100 that gathered to welcome her.

Merkel was actually born in the bustling port city of Hamburg in 1954 but her pastor father moved the family to communist East Germany when she was still a baby before settling in Templin when she was three.

Three years later, the Stalinist state would close the borders and build the Berlin Wall to try to stop a mass exodus of its citizens.

Her father, Horst Kasner, ran a Lutheran theological seminary aimed at addressing a chronic lack of clergy in a regime that was officially hostile to religion.

Her mother, Herlind, an English instructor, ran up against restrictions on teaching the “language of the enemy” and became a homemaker for the children: Angela, the eldest, Marcus born in 1957 and Irene, seven years younger.

They lived in a sprawling house painted green and yellow on the edge of a wood, while running a home for the disabled next door. Both are still standing.

Although she eventually headed off to university, the future chancellor never really broke ties with Templin, returning to visit her family and eventually buying her own modest holiday home nearby.

Both her parents, with whom she had a close relationship, are now buried here.

On a radiant September afternoon in Templin, which is still ringed by an intact medieval city wall, Merkel inaugurated a new daycare centre and planted a lime tree in the local “citizens’ garden”. Angela Merkel, the mayor of Templin Detlef Tabbert and Chairman of the City Council, Franz-Christoph Michel, plant a lime tree in the citizens’ garden in Templin. Photo: John MACDOUGALL / AFP

The event resembled any other good-natured small town ceremony, with its touch-too-long official speeches and homegrown entertainment.

Patiently, music lover Merkel listened to a young girl who did her best to play a passage from Beethoven’s 9th Symphony on the accordion.

“She’s one of us. When she’s here, she’s completely natural, like us,” said local Manuel Wichmann on the town square lined with restored pastel-coloured buildings.

Although he said he does not vote for Merkel’s conservative CDU party, the 46-year-old teacher values the economic and social stability he said she helped maintain in Germany.

Merkel frequently flees the pressure cooker of Berlin for Templin, just 80 kilometres (50 miles) to the north, at the weekends with her chemist husband Joachim Sauer.

Except for attending church, the couple largely keep to themselves.

Back then, she didn’t stand out, he said, apart from with her academic achievements. View of the town hall (Rathaus) and the market square of Templin, taken on September 10th, 2021. Photo: John MACDOUGALL / AFP

A gifted student, she excelled in maths and Russian, passed her leaving exams with top marks and went on to study physics in Leipzig before entering politics.

“What she has achieved is huge,” an admiring Retter told AFP.

Mayor Detlef Tabbert, a member of the far-left Die Linke party, is unabashedly proud of Templin‘s link to the world’s most powerful woman, praising in particular her crisis-fighting abilities.

“Maybe the mentality of people here in the region has been useful to her”, he told AFP with a smile — “calmness, patience and, when necessary, a healthy dose of tenacity”.