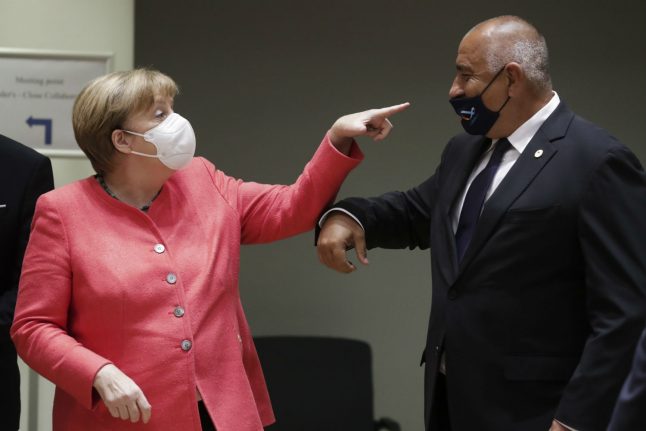 We dug out photos that help show how the Chancellor went from a young scientist to one of the most powerful politicians in the world. Angela Merkel on a camping trip in former East Germany in 1973. Photo: DPA

Angela Dorothea Merkel was born on July 17th, 1954 in Hamburg to her parents Herlind and Horst Kasner. The family moved to Templin in Brandenburg – the former East Germany – just weeks later after her father, a pastor, took up a post there.

Merkel isn’t one to divulge too much private information about what her life was like growing up behind the Iron Curtain. But she did tell a group of young people last year that she had smuggled “Westgeld” as a holidaymaker in the Eastern Bloc, where she travelled regularly.

Westgeld was a term used in the GDR to describe the Deutschmark (DM), as well other western currencies. Unlike the GDR Mark, West German money was not a legal tender in the GDR, and had a higher value which made it a desirable for those living in the east to have.

Those caught smuggling the currency could even face prison.

The admission showed Merkel’s rebellious and non-conformist side.

2. From “das Mädchen” to political star Merkel and Kohl at the CDU party conference in Dresden in 1991. Photo: DPA

Merkel, who is a trained scientist, became politically active in 1989, the year the Berlin Wall fell.

She briefly served as a deputy spokeswoman for the first democratically elected East German government, before winning election in 1990 to the reunified German parliament as a member of the Christian Democratic Union (CDU) party.

Then-Chancellor Helmut Kohl, who gave Merkel the patronizing nickname “das Mädchen” (the girl), named her minister for women and youth in 1991, setting off her career.

However, when Kohl got involved in a political slush fund scandal, it was Merkel who told her mentor that it was time to go, signalling she was a politician who wasn’t afraid to stand her ground. Merkel in Essen after being elected as new chairwoman of the CDU in 2000. Photo: DPA

She was elected CDU party chief in 2000 with more than 95 percent of the vote, signalling that the party was ready for change after Wolfgang Schäuble’s rocky reign.

Despite being leader of the party for 18 years, it was a turbulent time. Most recently, Merkel’s decision to keep the German borders open during the height of the refugee crisis in 2015 has split the party (and the country).

Commentators argue she moved the CDU more to the centre of the political spectrum, allowing the far-right anti-immigration Alternative for Germany (AfD) to step in and scoop up support from disenfranchised voters.

Merkel passed the baton on to her successor, Annegret Kramp-Karrenbauer, in December last year as she gets set to step down from the political stage. Merkel taking over the Chancellorship from the SPD’s Gerard Schröder in 2005. Photo: DPA

If Merkel looks a little smug in this picture, we can’t blame her. It was a momentous moment: she became the first woman chancellor of Germany in 2005, pushing out the centre-left Social Democratic party’s Gerard Schröder.

Similarly to her leadership of the CDU, Merkel’s chancellorship has not been without hurdles. Yet under her, Germany’s economy has prospered despite the global financial crisis of 2007-08.

Merkel, who is frequently called the EU’s most influential leader and the most powerful woman in the world, has said she will leave politics at the end of her term, in 2021. Merkel, as federal minister for the environment, visits the atomic power station at Gorleben in 1995. Photo: DPA

Merkel stunned the world when, after Japan’s 2011 Fukushima reactor meltdown, she reversed her pro-nuclear stance and announced that German atomic reactors would be phased out by 2022.

Long called the “climate chancellor”, she has also pushed Germany’s energy transition, which has ramped up wind and solar power and aims to meet 80 percent of demand with renewables by 2050.

However, Merkel’s green credentials have been damaged because Germany’s continued strong reliance on coal means it will miss its 2020 targets for reducing greenhouse gas emissions.

She has come under major pressure from campaigners, including young people who form the Fridays for Future movement. Angela Merkel Barack Obama in 2009 in the run-up to the NATO summit. Photo: DPA

When Merkel likes someone she shows it (and when she doesn’t it’s pretty clear too). And that’s the case with former US President Barack Obama, who is clearly on Merkel’s Christmas card list.

When he visited Germany in April the pair were spotted laughing together. Obama even called the Chancellor “my friend Angela Merkel” during an event.

A friendship developed between the pair during his eight-year term in office, with Obama also visiting the Chancellor in 2013 and 2017.

It’s clear that Merkel had a better working relationship with Obama than she does with his successor, as tensions between the US and Germany increase.

Angela Merkel pictured in Berlin during a phone selfie with refugee Shaker Kedida from Mossul in Iraq in September 2015. Photo: DPA

Merkel’s move to keep open German borders in 2015 to a mass influx of refugees, may have polarized the country, but many praised her for it.

As leaders across the world struggled with what to do during the crisis, Merkel made a firm decision, telling the country: “We can do it.”

At the time, some refugees asked for selfies with Merkel, or “Mutti” as she was dubbed. Angela Merkel takes part in an experiment at a school. Photo: DPA

In recent weeks the focus has been on Merkel’s health after she suffered three shaking spells during public ceremonies.

But she hasn’t cancelled one meeting during this time and is always out and about, meeting people and getting on with business.

We chose this photo of the Chancellor taking part in experiments with young people at a school in North Rhine-Westphalia because it reflects her enthusiasm for scientific experiments (despite not being involved in that industry in many years) and shows her ability to not take herself seriously, to get involved and have some fun.

The photos of Merkel enjoying beer also allude to the lighthearted side to the Chancellor.

9. Close ties with loved ones Merkel was close to her parents. However, she experienced heartache earlier this year when her mother Herlind Kasner died. Her father had died in 2011.

Merkel’s mum was always present when her daughter was elected head of government. When Merkel was awarded Templin’s honorary citizenship in February this year, her mother and her siblings – Marcus and Irene Kasner – accompanied the Chancellor to the reception.

Merkel is married to quantum chemist and professor Joachim Sauer, who has largely remained out of the media spotlight. One of the first things that used to come to mind for Germans when they thought of Merkel was her trademark diamond-shaped pose, which seemed to symbolize her balanced and calm personality.

It’s a look that seems to suggest: ‘I’m in control’.

However, the pose has not been so much of a talking point in recent years (perhaps everyone is just used to it?) but Merkel still falls back on it for group photos, such as this one at a recent event promoting immigration and integration in Germany.