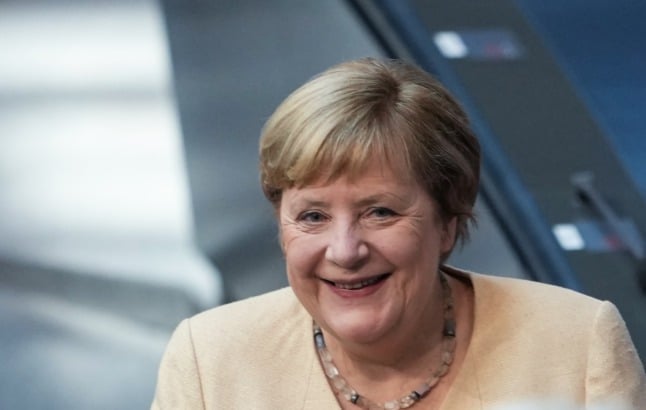 Laschet, the chancellor candidate for Merkel’s conservative CDU/CSU bloc, was long the favourite to be the next German leader, but his ratings have plummeted following a series of missteps.

The frontrunner is now vice-Chancellor and Finance Minister Olaf Scholz, whose centre-left Social Democrats (SPD) are enjoying a late spurt in the final weeks before the September 26th vote.

“It is a special election, not only because no incumbent chancellor is running for re-election for the first time since 1949,” the outgoing Merkel said in what was likely her last speech in parliament ahead of the vote.

“It is also a special election because it is a decision on the direction of our country in difficult times – and it is not irrelevant who governs this country,” she said.

Merkel warned against a coalition with the SPD and the Greens that “accepts” or at least does not rule out working with the Left Party (Die Linke).

“The best way for our country is a CDU/CSU-led federal government with Armin Laschet as chancellor, because his government would stand for stability, reliability, moderation and centrism,” she said.

The outgoing Chancellor said it’s also about “tangible economic and tax policy decisions that will determine the future of this country, the number of jobs”.

Merkel to the rescue

Merkel, who is retiring after 16 years in power, did not get involved in the race to pick a candidate from her party to run in the elections.

But with the Christian Democrats’ poll ratings plummeting to their lowest in the post-war period, the party is now encouraging as many joint appearances as possible between Merkel and Laschet.

A poll for the NTV broadcaster published on Tuesday showed the conservative alliance on just 19 percent, with the SPD out ahead on 25 percent and the Greens – an early favourite in the race – on 17 percent.

German conservatives have dropped under 20% for the first time in any national poll ever. For CDU/CSU, the parties that have dominated German politics since the end of WWII, this is an unmitigated disaster. https://t.co/g4OdXtGrtU

The CDU/CSU bloc won 33 percent at the last election in 2017 under Merkel, who remains immensely popular with the public.

Merkel appeared alongside Laschet at a digital summit on Monday, and also accompanied him at the weekend on a tour of two towns hit hard by deadly floods in July.

In North Rhine-Westphalia, where Laschet is the regional premier, Merkel told reporters he was “leading the largest state in Germany very successfully”.

“Anyone who can lead a state like this can also lead Germany as chancellor,” she said after visiting local officials in charge of the reconstruction effort, insisting her heart was “very much in it” when it came to endorsing him as her successor.

Laschet’s respons to the floods in his state was the beginning of a downward slide for the 60-year-old, after he was caught on camera joking with local officials during a tribute to flood victims.

Things then went from bad to worse when he said in a TV interview that it would be wrong to “change policies just because of one day”, in what sounded to many like making light of the catastrophe.

In a bid to reverse the trend, Laschet on Friday introduced eight allies who would serve as ministers or advisors on issues including renewable energy, digitalisation and helping the ailing arts sector in the pandemic.

If the alliance’s fortunes don’t improve soon, it could crash out of the chancellery in favour of an SPD-led government.