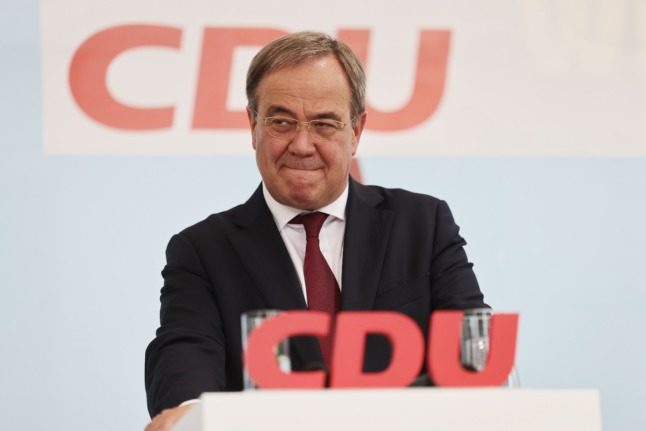 But with recent polls showing the conservatives neck-and-neck with the Social Democrats (SPD) and on a downward trend, the 60-year-old’s road to power is looking rockier.

Asked in a TV interview whether he thought the government had made mistakes in its climate policy, Laschet said it would be wrong to “change policies just because of one day” in what sounded to many like making light of the catastrophe.

“Anyone who says that 2015 must not be repeated is saying: We can only afford this humanity once,” the daily Süddeutsche Zeitung charged, accusing him of pandering to the far right.

At a rally in Berlin on Saturday, Merkel threw her support behind Laschet, insisting she was “deeply convinced” he was the right man for the job.

But one poll for the NTV broadcaster on Tuesday showed the alliance of the CDU and the smaller Bavarian CSU had fallen behind the SPD, their junior coalition partner, for the first time since 2006.

Recent surveys of who Germans would like to see as their next chancellor have also left Laschet lagging badly behind Olaf Scholz, the SPD candidate.

Laschet only secured the conservatives’ chancellor candidate nomination in April after a bruising battle with the CSU’s Markus Söder, who still regularly beats him in popularity polls.

With a whiff of discontent lingering in  Söder’s camp, the Bild daily even quoted MPs on Friday apparently urging Laschet to step aside for the sake of the party.

But Laschet has a reputation for endurance and what Der Spiegel magazine has described as an ability to “sit out” his opponents – a talent that may
yet land him Germany’s top job.

He won the vote to become CDU leader against many expectations, and also outperformed the polls to secure an impressive election win in North Rhine-Westphalia in 2017.

Asked in a recent TV interview whether he thought he was often underestimated, Laschet replied that “many have certainly miscalculated”.

‘Statesman in the making’

Laschet was born in Aachen, the spa city in western Germany near the border with Belgium and the Netherlands.

The father-of-three is a devout Catholic and met his wife — who is of French-speaking Wallonian origin — singing in a church choir.

He is a great fan of Charlemagne, the king of the Franks credited with uniting Europe whose empire was based in Aachen, and his family has even said they are direct descendants.

Known for his affable Rhinelander persona, Laschet has been accused of lacking the gravitas to negotiate on the world stage.

He was also widely criticised for what was called a dithering response to the pandemic in North Rhine-Westphalia, with the Süddeutsche Zeitung describing him as “indecisive, sometimes acting impulsively”.

In responding to the crisis in Afghanistan, he has aimed to show he is capable of taking a firm stance as he accused NATO of the “biggest debacle” in its history.

Afghanistan gave Laschet “the first opportunity to present himself as a statesman in the making”, Die Welt daily said. “This was no longer the friendly Rhinelander.”