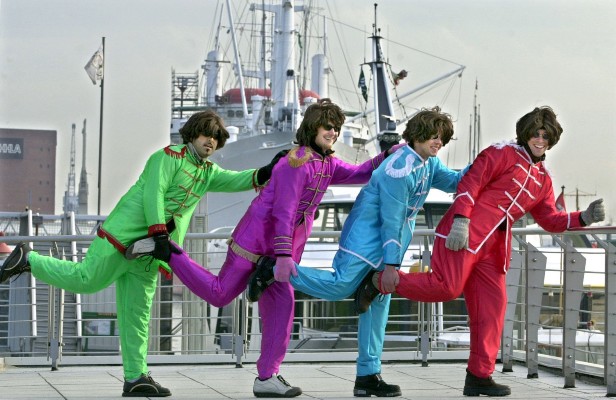 When were the Beatles founded? Lookalikies in Hamburg. Photo: dpa | Ulrich_Perrey

Learning German is no easy feat – in the famous words of Mark Twain, “[eternity] is to give some of us a chance to learn German”! It’s easy to get lost in the neverending conjugations and tenses, but fear not, as some of the simplest changes can make a huge difference.

In this article, The Local shares some common mistakes beginners make when learning German – and how to fix them! Small steps go a long way, you’ll be fluent with practice!

Punctuality is key in Germany, but understanding the time would help!

First point to note is that Germans often use the 24-hour-clock, particularly in formal settings and schedules, as there isn’t really a German equivalent to the English a.m. and p.m. Of course, you’re less likely to hear people use the 24-hour-clock in colloquial language. Instead, you might hear friends distinguish between früh (‘morning’) and abend (‘evening’), for example früh um 9 (Uhr) or um 9 Uhr abends.

You’ll probably hear the time phrases Viertel (‘quarter’) and halb (‘half’) being used with the 12-hour-clock too, as with English. For example:

Watch out when using halb, though! A key concept to remember is that Germans think of it being half TO the hour, rather than half PAST the hour as in English. This means that if you hear someone saying half sieben, they’re referring to our ‘half six’.

SEE ALSO: Where in the world are more people learning German?

From telling the time to setting the date…

In English, we would tend to say something like: ‘The Beatles were formed in 1960’. Logically, we may attempt to translate the year the same in German (‘in 1960’). Of course, nothing is ever that simple.

When talking about a year in German, you can either use im Jahr 1960 (‘in the year of 1960’), or forgo the first part entirely and simply state the year. For example, you can say:

As another example, if you wanted to say the year in which you were born, you can say:

You mustn’t make this mistake, or may you?

There are six modal verbs to be familiar with in German: dürfen, können, müssen, mögen, sollen, and wollen. Modal verbs are a type of auxiliary verb (or ‘helping’ verb), in which you can express ability, necessity, obligation, permission or possibility. Learning their basic meanings should serve you quite well. However, there’s sometimes confusion with the meanings of the modal verbs müssen and dürfen.

May I have crisps too?

First you have to finish your homework.

The real problem comes when you want to talk about something you mustn’t do.

You may assume that saying Du musst nicht would translate to ‘you must not’ but this is not the case. Du musst nicht actually means ‘you don’t have to’, implying that you still may do it, that you are allowed to.

You mustn’t [are not allowed to] smoke inside.

Therefore, it’s best to equate being allowed to do something or not with dürfen, and then being forced with müssen. September has officially begun, bringing with it the anticipation of autumn. A popular topic of conversation may be the increasing autumnal chilliness in the air, to which you might want to agree ‘Ich bin kalt’ – stop right there!

The formation ‘Ich bin kalt’ is an anglicised translation, which doesn’t mean what you may intend it to mean. It’s a common mistake many non-native speakers make at first. Using ‘Ich bin kalt’ changes the meaning to refer to yourself specifically, therefore conveying something like ‘I have a cold personality’, which probably won’t do so well in conversation.

Instead, if you want to say that you feel cold, you should say ‘Mir ist kalt’. Here, using the dative ‘mir’ acts as saying ‘to me’ – so an English translation of the phrase would be ‘it’s cold to me’, making you the recipient of the cold air.

The same goes for some other expressions, such as ‘Mir ist warm’ (‘I’m warm’).

Pronunciation is a broad topic and can be one of the trickiest parts of language learning! Pronouncing words as a native would is crucial for making sure you can be understood and put all your grammar and vocab skills to good use! These are just a few aspects of German pronunciation to brush up on …

In German, there are some characters which are unfamiliar to English speakers, for example the umlaut on the vowels ä, ö, ü. Making these sounds may feel like a battle with your tongue but distinguishing between vowels with and without umlauts is key, and it’ll get easier with time and practice!

To make an ä sound, as in the German word Käse (‘cheese’), you can mimic the short ‘e’ sound in the English ‘end’.

To make an ü sound, as in the German word Tür (‘door’), again start by making a long ‘e’ sound (as in the English ‘speed’), and then round your lips as if you’re using a straw. The end sound should hopefully be an ü sound.

To make an ö sound, as in the German word möglich (‘possible’), start by making a long ‘e’ sound but when going into the rounded ‘using-a-straw’ position as before, keep your tongue back and make your lips less pronounced. The end sound should be more like the ö sound.

It’s hard to describe the right sounds in words, so hopefully the video below will help in giving some tips on how to make these sounds. I personally highly recommend this YouTube channel in general for German language tips and cultural insights presented in a fun and entertaining way!

In German words, the combination of vowels or consonants can prove tricky for non-native speakers. The difference in pronunciation between ‘ei’ and ‘ie’ in a word (for example,  can be crucial – and even end up changing the meaning of the word if pronounced incorrectly. Many English speakers see the letters ‘ie’ and instinctively want to pronounce them to rhyme with the vowel sound in ‘lie’ and ‘tie’. In actual fact, this vowel combination is pronounced in line with ‘see’ and ‘tea’.

To help you remember, whichever letter is the last in the combination is how it should be pronounced. So:

Simply enough, the ‘z’ sound in German is pronounced as ‘ts’. So when saying the word zwei (‘two’) for example, think about it as ts-wei. This might seem like a minor detail in the grand scheme of things but it is noticeable to Germans!

Try this Zungenbrecher (‘tongue twister’) below to practise: Similar to above, the letter ‘v’ has a softer pronunciation than in English. In German, you’d pronounce ‘v’ as an ‘f’ sound. So think of Vater as F-ater.

Here’s another Zungenbrecher for you:

Hopefully the above tips will give you something to think about and practise. Remember, the smallest changes can make a big impact, and will help you on your way to becoming a fluent German speaker!

READ MORE: Eight unique words and phrases that tell us something about Germany