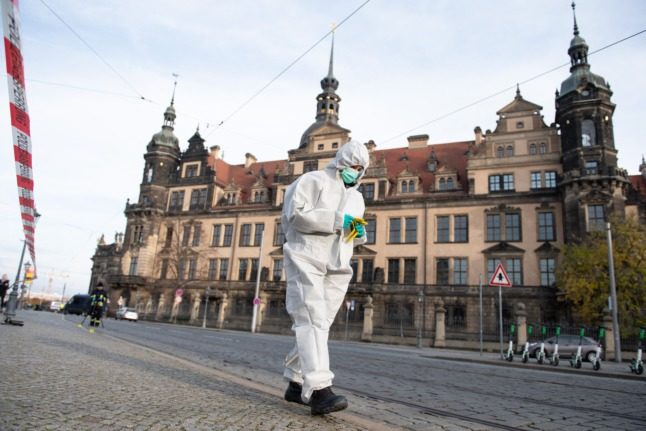 A forensic expert searches the area within a police cordon in front of the Royal Palace that houses the historic Green Vault (Gruenes Gewoelbe) in Dresden, eastern Germany, after the 2019 robbery. Photo: SEBASTIAN KAHNERT / DPA / AFP

The suspects, all German nationals aged between 22 and 27 years old, are accused of aggravated gang robbery and aggravated arson.

Two among them had previously been convicted for stealing in 2017 a 100-kilogramme (220-pound) gold coin from Berlin’s Bode Museum — another robbery that shook up Germany.

Armed with a loaded revolver and an automatic-loading gun with a silencer, the men allegedly broke into the Green Vault museum in Dresden in the early hours of November 25th, 2019, making away with 21 pieces of jewellery encrusted with more than 4,300 diamonds.

The insured value of the pieces reached €113.8 million ($135 million), prosecutors said in a statement.

None of the stolen items have been recovered.

The suspects are believed to have started a fire to cut off the power supply for street lighting around the museum just before the burglary.

And as they were making their getaway to Berlin, they allegedly set fire to an Audi S6 in an underground carpark, leaving a total of 61 vehicles damaged.

The property damages are estimated at more than a million euros.

Investigators are still searching for the stolen objects, prosecutors revealed.

Dresden’s Royal Palace, which runs the museum, had said the items taken were priceless 18th-century jewellery and other valuables from the collection of the Saxon ruler August the Strong.

They included a sword whose hilt is encrusted with nine large and 770 smaller diamonds, and a shoulderpiece which contains the famous 49-carat Dresden white diamond, Dresden’s Royal Palace said.

Prosecutors did not name the suspects.

But during their manhunt, police had confirmed they are members of the so-called “Remmo clan”, a family of Arab origin notorious for ties to organised crime.

In recent years, such “clans” of primarily Middle Eastern origin have become a particular focus for police in Berlin.

At a separate trial in Berlin Thursday, another member of the Remmo family confessed to the robbery of an armoured money carrier in the German capital.

Together with four other suspects, Muhamed Remmo, 31, had dressed up as a trash collector for the heist outside a bank branch in western Berlin’s shopping avenue Kurfuerstendamm.

He threatened security guards with a blank pistol and sprayed teargas at them while his accomplices loaded their getaway car with more than €600,000 in cash. Three men were sentenced to several years in prison for stealing an enormous Canadian coin from the Bode Museum, Berlin, in March 2017 – but the coin has not yet been recovered. Photo: picture alliance/dpa | Paul Zinken

Investigators in 2019 targeted the Remmos with the seizure of 77 properties worth a total of €9.3 million, charging that they were purchased with the proceeds of various crimes, including a 2014 bank robbery.

Police have also found no trace of the Canadian coin taken in the March 2017 robbery at the Bode Museum, located close to Chancellor Angela Merkel’s Berlin apartment.

The “Big Maple Leaf”, one of five minted in 2007, is considered the world’s second-largest gold coin after the one-tonne Australian Kangaroo issued in 2012.