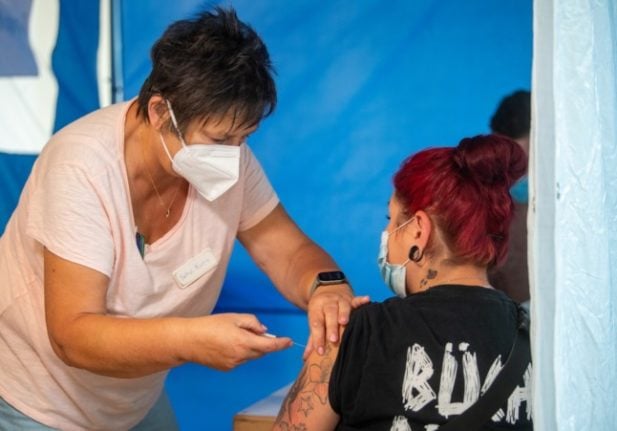 Germany has tightened its ‘Covid health pass’ system to allow only vaccinated, recovered people or those who’ve tested against Covid entry to many indoor places – known as the 3G rules.

But from October 11th, taxpayer-funded rapid tests will no longer be free except for those who can’t get the vaccine or are not eligible.

The move is to entice more people in Germany to get their Covid jabs after the vaccine campaign stalled. Nearly 65 percent of the population has had at least one jab, and around 60 percent are fully vaccinated.

We released a 24-hour survey last week to find out your thoughts on Germany’s controversial strategy aimed at increasing vaccinations and controlling the Covid spread.

Let’s start with how many respondents are vaccinated against Covid themselves.

According to the 72 readers who got in touch with us while the survey was live, 86.1 percent were partially or fully vaccinated. A small number of people hadn’t been vaccinated yet, are pregnant, are not eligible or have been ill. Nearly 10 percent of respondents do not want to get vaccinated.

We asked what you think about the move to formalise the ‘3G’ entry across the 16 states. The large majority – 70.4 percent – said they think it’s a good idea, while 25.4 percent said it goes too far.

When it comes to charging for Covid tests there was a real mix of opinions. More than half – 56.9 percent – said they were in favour of forcing unvaccinated people to pay for tests, while 36.1 percent said they did not like the plans.

Unvaccinated ‘need to pay for tests’

Lots of readers said the decision by the German government makes sense.

Martyn Cant, 67, in Braunweiler said: “I believe that as the vaccine is for free, everyone who can get immunised should. Therefore if you are not prepared to get the jab, then pay for the test. After all, it’s taxpayers’ money that is being used.”

“If people don’t want to get vaccinated – fine – but it must have a price,” said Cath Johnson, 62, who’s based in Germany.

Richard Peach, 65, in Dortmund, said: “If people refuse to get vaccinated for free, then everyone else should not have to pay for their multiple tests.”

“When a facility is provided to get yourself vaccinated for free, and you don’t use it, then it is justified that you might have to go through additional (paid) tests to enjoy comforts that other vaccinated people enjoy,” said Melvin Chelli, 28, in Saarbrücken.

Justin Wilkins, 47, in Werl said: “It is in everyone’s interests that as many people as possible are vaccinated. Although those who do not wish to be vaccinated must be respected (assuming this is personal choice and not medical necessity), the state cannot be expected to carry them forever.”

Andrei in Berlin said: “If people aren’t willing to be part of the society in order to ensure Covid dims down, then they need to pay for themselves.”

He added that Germany should think about even tougher measures for those who are eligible for the vaccine but refuse it, such as not getting paid time off work if they end up getting Covid.

A lot of people said they hope having to stump up for rapid tests will push people to get their jabs.

“Though controversial I believe this will motivate more people to get vaccinated,” added Soma Sekar, 35,  in Berlin. “Living in fear of the virus is no longer acceptable, this is something both sides of the vaccination campaign will agree on.”

There are some groups of workers – such as teachers – who may be worried about being in high-risk Covid situations.

Emily, who’s a teacher in Germany and had Covid last year, told us she felt “sad, disheartened and angry” at the attitude of many parents regarding Covid tests and the vaccine. She is desperate for as many people as possible to get vaccinated for her own safety.

Emily said: “I believe that many parents of my students think that teachers’ health (or even lives) are worth sacrificing if it means getting students in school, and many of these same parents refuse the vaccine and tell their children to refuse the now optional Covid test in school.

“They simply do not care if asymptomatic infected children might be infecting adults, and now that we know the vaccine does not prevent reinfection, I am badly frightened.

“I have pre-existing health conditions that made my first round of Covid hard, and I dread getting the virus again.  I am hoping that the new plan to charge for rapid tests will mean a few more parents decide to get vaccinated, and to get their children vaccinated when that is possible.”

Some readers said they wish their home country would consider making a decision like this.

Jeffrey Lazar, 74, from Texas, said: “I wish the USA was half as good/half as smart.”

However, lots of people told us they were firmly against the government’s move to charge for Covid tests.

Some said it was moving towards the path of compulsory vaccination, which Germany has said it will not go down, even for groups of workers such as healthcare employees or teachers.

Tony S, 53, in Munich said: “This is another step toward making it (the Covid vaccine) compulsory. Not allowing the unvaccinated indoors and charging to obtain rapid test if they wish to go indoors, is effectively making the vaccine compulsory.”

Bibek Sitaula, 32, in Frankfurt said: “It’s too much now, they are forcing everyone to vaccinate now, it seems more politically motivated.”

An anonymous respondent said: “Forcing people to do something they don’t want is an infringement of their rights.”

Rapid tests will cost around €15 to €20 after October 11th, although the price will be set by private providers so could be more expensive.

David Mitsko, 54, in Berlin questioned how charging people for tests will impact people’s lives if they choose to not get the vaccine, which is within their rights.

He, said: “It discriminates against poorer people, who will not be able to afford to have tests frequently. It will also hurt many businesses, as more people will choose not be tested as frequently, including visitors to Germany, who may, in fact, decide not to come at all.”

Phil Cooper, 55, in Schömberg said he wants to see fixed prices for the tests. He said: “I see both sides of the argument and would be happy to pay if they are priced reasonably and not hugely inflated like in the UK.”

A few people said they believe the situation will get worse for the unvaccinated.

Chris Riley, 61, in Bad Homburg, said he got the vaccine “because life will be made difficult in the future without it”.

Some respondents to our survey said even though they support everyone getting vaccinated, they weren’t sure about the strategy of the German government.

Anirban Maiti, 32, in Berlin said: “This is directly an attempt to force people to either get vaccinated or pay money for taking part in society. I am vaccinated but if someone does not want to, we should not force people indirectly.”

“Removing the option of free rapid tests will have negative consequences for the management of the health crisis,” said Demetris Karayiannis, 28, in Potsdam.

Vivek Ganesh, 41, in Hannover said: “Free rapid testing should still be continued as the pandemic is not yet over and fully vaccinated people or children are still prone to danger caused by non-vaccinated people.”

Meanwhile, others suggested that rapid tests could remain free some of the time, or even for vaccinated people to monitor their infection status.

Thomas Boon, 25, in Frankfurt, said: “In general I am in favour of it. I would support keeping them free in circumstances, such as when travelling in or out of the country.”