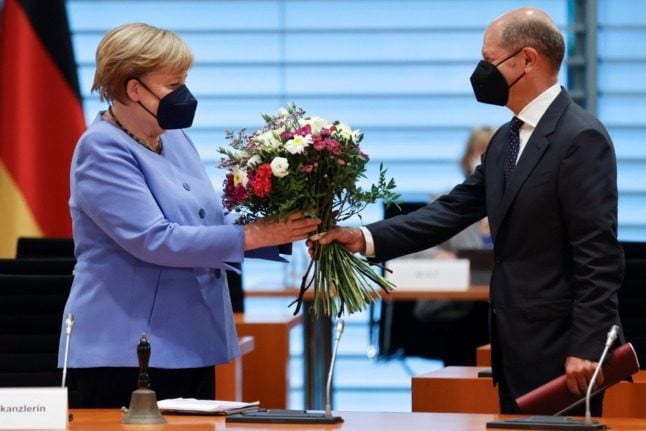 With a month to go until the September 26th vote, Merkel’s conservative CDU-CSU bloc and their current junior partners in government, the Social Democrats, are running neck-and-neck, with the ecologist Greens close behind.

That leaves wide open the question of who will steer the EU’s most populous nation after the widely trusted Merkel retires from politics.

With the Afghanistan debacle triggering a crisis of confidence in the West and the climate emergency demanding urgent action, Germany may well be tied up for months to come with a messy struggle to form a coalition government under a new chancellor.

“It is only now dawning on many people that Merkel is leaving the stage,” Ursula Münch, director of the Academy for Political Education, near Munich, told AFP.

“Of course the candidates are being judged in comparison to her – they’re big shoes to fill.”

The frontrunner by a whisker according to most polls remains Armin Laschet, the affable but gaffe-prone premier of North Rhine-Westphalia, Germany’s most populous state, and head of Merkel’s Christian Democratic Union.

The veteran leader sought to lend some of her enduring star power to Laschet at a joint campaign event in Berlin last weekend, calling him a “bridge-builder” and saying she was “deeply convinced” of his abilities.

Voters, however, do not appear to share her confidence.

After Laschet emerged from a bare-knuckle battle within the conservative bloc as the candidate in April, many Germans reacted sceptically to what they saw as his inconsistent strategy to confront the pandemic.

A disastrous appearance during deadly floods in July in which he was caught laughing on camera while President Frank-Walter Steinmeier expressed his sympathies to victims reinforced doubts about his gravitas.

“The tide has turned against Laschet and his party,” news weekly Der Spiegel said. “That can change but it should be clear to him – it will get harder by the day.”

Meanwhile the Social Democrats, weakened for years by infighting, have mounted a remarkable surge, largely attributed to their competitors’ shaky showing.

Their centrist candidate, Vice-Chancellor and Finance Minister Olaf Scholz, has emerged as the campaign’s dark horse by remaining above the fray and avoiding embarrassing blunders.

“He – not Laschet – seems the natural heir to the Merkel era. He is not making any mistakes.”

Many analysts noted that Laschet also made the tactical error of turning most of his firepower on the Greens’ untested candidate, Annalena Baerbock, instead of Scholz.

Her initially strong appeal has largely fizzled following accusations of plagiarism and padding her CV and in the face of a targeted “fake news” onslaught.

Münch, the political scientist, said the Greens had miscalculated in choosing Baerbock, an MP who has never led a state or a ministry, citing her
gender as justification.

“It is a shame she didn’t wait until she had gained more experience – her confidence is obviously shaken now and it’s almost tragic because I don’t know if she’ll get another chance to run.”

Polls put both the centre-right CDU-CSU and the Social Democrats on around 23 percent, with the Greens at about 17 percent.

Compared to the 2017 election, that would mark a whopping 10-point slide for the conservatives who have never scored below 30 percent in any election post-war. It would be a small gain for the SPD on their record low score and a doubling of the Greens’ vote.

The pro-business Free Democrats, frequent kingmakers in post-war politics, are tallying around 13 percent meaning they could play an outsize role in the coalition horse-trading.

The far-right Alternative for Germany (AfD), a key spoiler at the last election but spurned by the other parties, is trailing at about 12 percent as the national debate has shifted away from their signature issue of migration.

Assuming the race remains close, the parties are bracing for marathon coalition negotiations after an unusually ill-tempered campaign.

However, Bild highlighted that after a generation of Merkel coming out on top at the polls, “at long last, Germany may be able to look forward to a genuine race for the chancellery”.