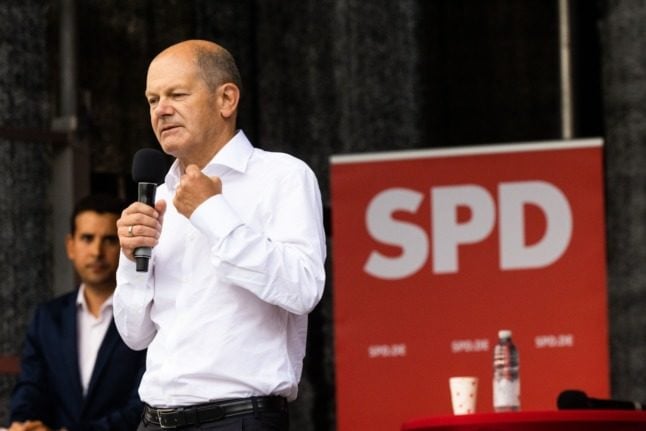 The survey of 2,504 people for the NTV broadcaster had the centre-left party in the lead on 23 percent, with Merkel’s CDU-CSU alliance (known as the Union) trailing behind on 22 percent.

The Greens scored 18 percent in the poll, while the pro-business Free Democrats (FDP) scored 12 percent and the far-right Alternative for Germany (AfD) managed 10 percent. The Left party trailed behind with six percent in the latest poll.

This German election race is wide open. The Social Democrats have overtaken Merkel's conservative bloc in the latest Forsa poll for RTL/ntv, making an #SPD-led coalition an undeniable possibility. Meanwhile, the #CDUCSU and the #Green Party lose more ground https://t.co/eta4BmjY6F

The two parties – the. Union and the SPD – are currently in a governing coalition led by the conservatives, with Merkel due to step aside after elections on September 26th.

The CDU-CSU alliance enjoyed a strong lead in the polls going into the summer, but has been on the back foot amid a series of missteps from Armin Laschet, the conservative candidate to succeed Merkel.

In July, Laschet was pictured laughing in the background with local officials while Germany’s president gave a speech mourning the victims of deadly floods.

Since the disaster, the conservatives have been unable to halt a falling trend in popularity.

The Greens, who enjoyed a surge in support earlier in the year, have also failed to regain momentum after their chancellor candidate Annalena Baerbock was embroiled in a plagiarism scandal.

Until a few weeks ago, the SPD had been polling so badly that many had written off the possibility that it would be part of the next government.

But surveys last week already showed the centre-left party neck-and-neck with the conservatives, who have led Germany in four coalitions since 2005 when Merkel took office.

A survey published Friday also showed 41 percent of voters would prefer the SPD candidate Olaf Scholz to be the next chancellor, compared with just 16 percent for Laschet.

Scholz is the current Finance Minister and Vice-Chancellor – and may appeal to voters who are searching for a stable Angela Merkel-type figure.

Merkel is bowing out of politics at the upcoming election after leading the country for nearly 16 years.