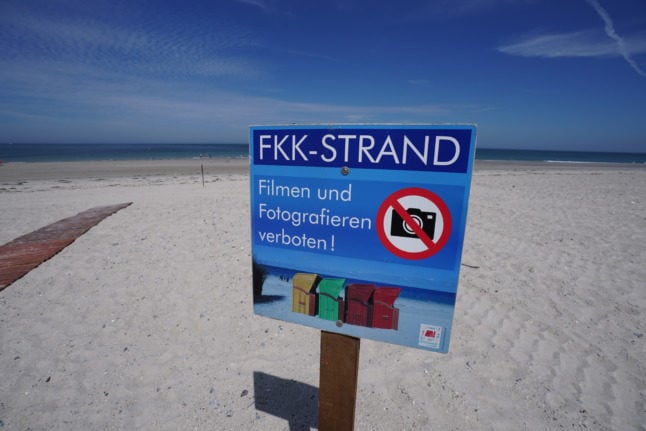 A sign on the FKK beach in Helgoland warns visitors that filming and photography are forbidden. Photo: picture alliance/dpa | Marcus Brandt

“There’s a bare arse peeking out of every wave,” Romy Schneider is said to have remarked after a visit to the island of Sylt in 1968.

But nowadays, ‘Freikörperkultur’ (FKK), or free-body culture, is less trendy than ever – or at the very least, it’s divisive. Many Germans love to scamper about in the nude, while others turn their noses up at the idea. On top of this, the pandemic is bringing about new concerns. The Wannsee lido in Berlin, for instance, is no longer welcoming nudists, as they’re seen as posing a health risk in the pandemic.

While many (particularly older) Germans may be used to stripping off completely at the beach, sauna and swimming pool, women going topless has sparked a raging debate this summer – and one prominent case has led to a whole movement being founded.

At the beginning of July, one woman bathing topless at the Berlin water area ‘Plansche im Plänterwald’ was accosted by police and accused of indecent exposure. This led to widespread debates about equality. The water park’s security had asked her to put a top on multiple times, and eventually the police were called. The authorities defended the actions of both the park supervisors and the police, but did also apologise to the woman in question, who had been sunbathing with her six-year-old son.

‘Equal breasts for all’

At the core of the discussion is an important question: why are naked breasts an example of this ‘free body culture’, while a cisgender man’s naked chest isn’t?

Under the motto ‘equal breasts for all’, a campaign has been born. It demands that women be allowed to go topless in places where men are already extended the same privilege. Proponents want to ‘normalise’ breasts instead of sexualising them. Their maxim is ‘no nipple is free until all nipples are free.’ A woman was accosted by police for bathing topless at ‘Plansche’ in Berlin Plänterwald, starting a new movement under the motto, “Equal breasts for all”. Photo: picture alliance/dpa | Fabian Sommer

Further evidence for an increasing discomfort with nudity has been sourced by researchers in recent years. A joint survey with YouGov and the statistics portal Statista found recently that most adults in Germany feel uncomfortable in spaces where nakedness is permitted, for instance in saunas or nudist beaches. Only 28 percent of people reported feeling at ease, compared with 36 percent who were not comfortable.

The rest of the people surveyed either avoided such places completely, or chose not to volunteer information relating to the topic. Women felt slightly more uncomfortable, at 39 percent, compared with 34 percent of men. In line with the age-old cliché, eastern Germans were more likely to feel comfortable in nudist settings than western Germans, at 36 percent compared with 26 percent.

The historian Heiko Stoff of Hannover Medical School, who has researched the history of naturism, considers that public debates such as about the topless woman in Berlin are ultimately not representative of broader opinion. For him, the internet is the biggest culprit in terms of instigating shame. In the selfies and full-body photographs which saturate sites like Instagram, an idealisation of thinner bodies with firm skin is dominant.

SEE ALSO: VIDEO: Why do Germans love getting naked?

“Most pictures that are uploaded have been photoshopped,’ he said. “But when we’re naked on the beach, we can’t put our bodies through a filter. In my view, that’s definitely part of the reason why so many people feel uncomfortable with nakedness nowadays.”

Is Instagram responsible for the decline in popularity of FKK? Photo: picture alliance / dpa | Jens Kalaene

And even if some people feel comfortable putting their imperfect bodies on show at the beach, many still feel a certain pressure to resemble conventional beauty standards.

“It doesn’t take long for you to feel like a failure, or like someone who has not succeeded in making their body meet the ideal,” Stoff said. “That steals the joy of nakedness, and replaces it with stress and a certain competitiveness.”

This competitiveness is exactly the thing that clothing usually helps to cover up.

READ ALSO: Undressing at a Berlin sauna wasn’t the moment of liberation I’d hoped for

“Someone who is accustomed to feeling socially high-ranking because of their job or their money can have their self-image turned upside down when naked on the beach,” Stoff explained. “Suddenly they might feel inferior to a young proletarian who spends a lot of time doing physical labour.”

Historically, Germany has been regarded as a cradle of naturist culture. “Up until the founding of the first FKK club at the end of the 19th century in the German Empire, most of Europe had pretty much the same relationship with nakedness,” said Stoff.

“But the then-burgeoning naturism movement in Germany had a clear message. It was all about working systematically with the body in line with the classical Greek model, trying to translate those ideal marble bodies into a corporeal reality.” It was a hugely flawed movement whose message was easily exploited. There was a sense within the movement that only beautiful, healthy bodies should procreate. According to Stoff, this “tapped into the zeitgeist of eugenics, nationalism and so-called ‘racial hygiene’.”

And there were foul consequences: parts of the ‘Lebensreformbewegung’, or ‘life reform movement’, gave rise to a fatal antisemitism. According to Stoff, some proponents of the movement taught people how to recognise Jewish people through their circumcised penises.

READ ALSO: The dos and don’ts of public nudity in Germany

In the 1920s, a more socialist perception of nudism arose alongside the nationalist. “It was thought that the oppressed proletarian body would become aware of its enslavement in its own nakedness,” said Stoff.

“People wanted to set aside the old moral codes of the German Empire and embrace a joy in life.” In the same decade, magazines about nudist culture sold like hotcakes in kiosks. They weren’t explicitly pornographic, Stoff clarifies, but often occupied ‘grey areas’ in terms of legality. Most importantly, the body was now pictured romping around frivolously on the beach, far from its previous statuesque ideal. During the years of Nazism, people were far less prudish than we tend to assume. Hans Surén’s FKK book ‘Man and Sunlight’, which teems with naked figures, was a bestseller. After 1945, fans of the nudist movement were given their own designated beaches in many places in both the West and East. From the 1960s into the 1970s, naked bathing was a trend – women were expected to be at least to be topless, a huge difference to today’s ideas.

With this history in mind, it’s easy to see how people are assuming that Germany is undergoing a progressive ‘re-prudeification’. But Stoff doubles down on his view that unrealistic body standards are the main culprit in this cultural shift. He said: “The reality of their own bodies makes people feel anxious, so they choose to reject that reality. I see that as a more decisive cause of discomfort than the idea that Germans are somehow becoming more prudish, or that religious views are being rekindled.”