Hamburg is where employees earn the most in Germany, according to recent figures. Photo: picture alliance/dpa | Daniel Bockwoldt
Rachel Loxton
[email protected]
@rachloxton


Ever wondered how much money other people earn in Germany? These new figures shed some light on the pay packets of employees in industries across the country.

If you’ve ever thought about moving to Germany for work – or you’re already here but want another job – here’s a look at recent figures on salaries published by the Federal Statistical Office, and a few other things to think about.

In 2020, the average income in Germany was €47,700 gross (before tax). This means that during the first Covid pandemic year, income fell by an average of €300 compared to the year before.

The average income is the mean value of the gross salaries of all employees in Germany.

So keep in mind that it takes in what all employees earn across the country – even those earning six-figure amounts.

The average salary of €47,700 corresponds to a monthly gross salary of €3,975 for a full-time job (35 to 40 hours a week is common for full-time in most companies). The Statista graph below shows what German employees have earned on average per month through the years from 1991 to 2020. 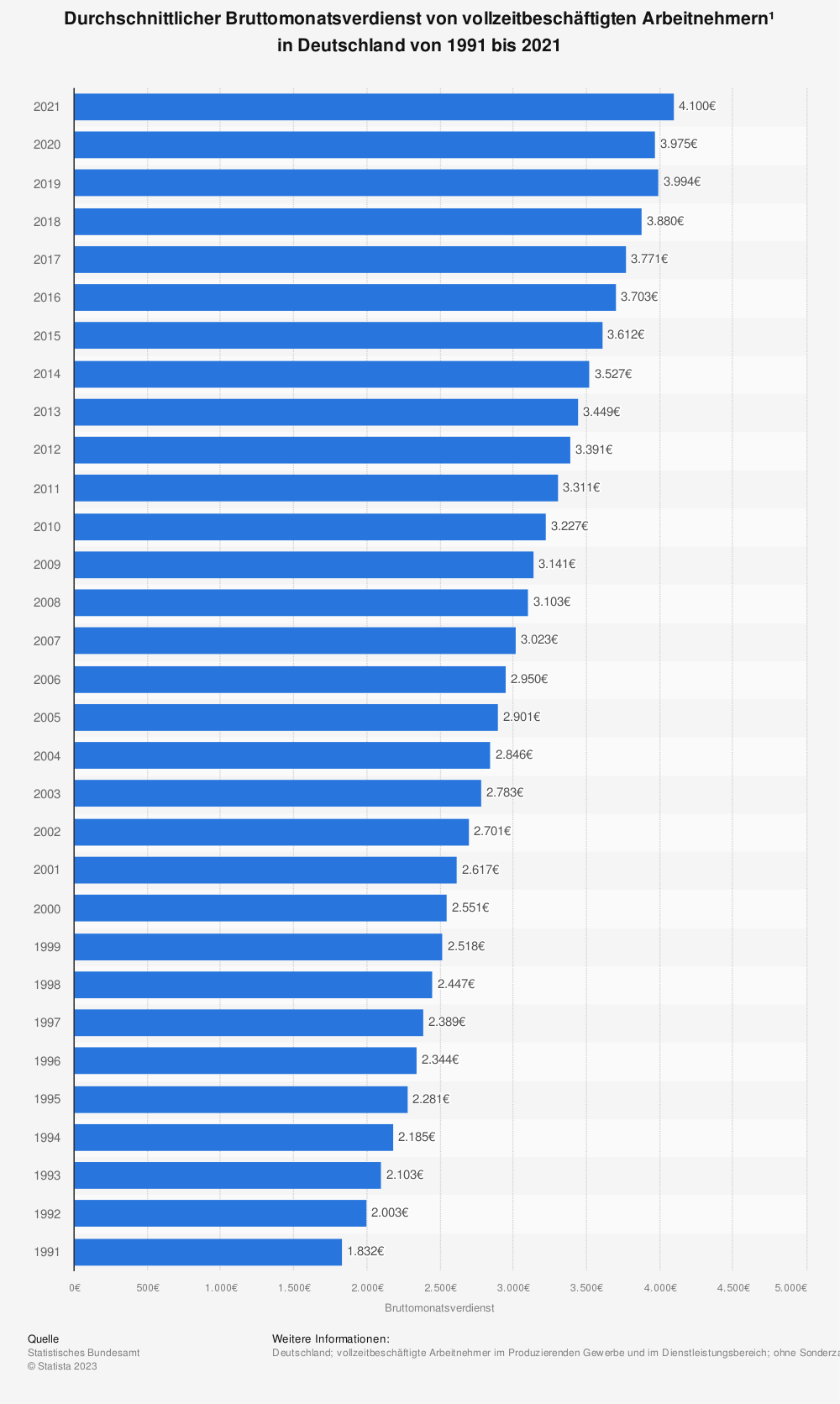 For a person with the tax class I living in Baden-Württemberg, this would result in an average take home pay of €2,526.26 net (after tax).

Special payments, for example in the form of vacation pay or bonuses are not included in the data analysed by experts.

What do people earn in different industries in Germany?

Using the latest stats, German business daily Handelsblatt put together a special report looking at how the average income of employees in Germany varies depending on the industry, region and gender of employees.

There are – unsurprisingly – large differences in what you take home every month depending on which sector you’ve decided to enter.

According to the Federal Statistical Office, employees working in financial and insurance services as well as IT sectors earned the most in 2020. Employees there received a not too shabby €5,248 to €5,602 per month (gross) on average.

Employees from the hospitality industry earned the least, with average gross earnings of €1,893 per month.

READ ALSO: End of home office: Are employees in Germany ready to return the office?

Average (gross) income in Germany across industries per month in 2020

What do people earn in Germany’s states?

As well as the type of industry, what you take home every month depends on the federal state where you’re employed. According to the Federal Statistical Office, full-time employees in Hamburg earn the most in Germany, with an average gross monthly income of €4,966.

This is followed by Hesse and Bavaria in second and third place. Mecklenburg-Western Pomerania brings up the rear. Full-time employees here earn the least compared to other states with €3,379 gross per month.

What is particularly striking is that even after more than 30 years of reunification, the difference in earnings between western and eastern Germany is clearly visible.

How does gender influence average income?

Another factor influencing the amount you earn is your gender. Sadly, women received less money for the same work than men in 2020.

This is known as the gender pay gap. In 2020, women received around 18 percent less money than their male colleagues.

And at 20 percent, the difference was significantly higher in western Germany and Berlin, than in the eastern states where it was six percent.

This percentage difference has remained around the same level since 2002. The German government aims to reduce the salary gap to 10 percent by 2030.

Why do women get paid less than men?

The reasons for the large difference in average incomes between women and men are down to several reasons. One important factor is the salary levels of the industries. In male-dominated sectors such as financial services, IT and manufacturing, salaries are higher on average. In industries such as nursing and social work – where many women tend to work – salaries are lower.

However, even when industry differences are taken into account and only gross salaries are compared between, for example, male and female engineers with the same work experience, there is still a pay gap of at least six percent.