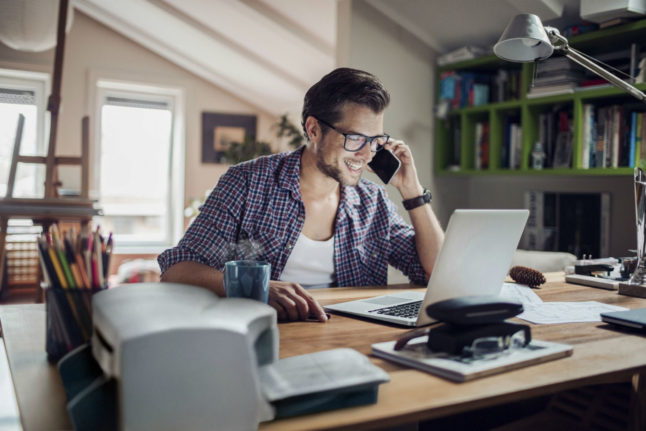 The work-from-home boom could relieve the pressure on the housing market in big cities whilst bolstering interest in the surrounding areas, according to property experts.

“Remote working could make a larger area around the city more attractive,” said Michael Voigtländer, property expert at the German Economic Institute (Institut der deutschen Wirtschaft). Those who only need to go into the office twice a week would be able to deal with a longer commute.

READ ALSO: Will working from home become the norm in Germany post coronavirus?

The rise of remote working could also spell good news for rural areas. Those who choose to move, however, would require a good infrastructure consisting of schools, Kitas, fast internet and a decent cultural scene.

“The housing market has always been very focussed on the big cities,” said Vogtländer. That said, he doesn’t expect a mad rush to the countryside. Urban areas will remain attractive for highly qualified people seeking jobs in the service industry.

“The commuting areas in large metropolises could expand, however.” This could slow down accelerating house prices in many big cities.

READ ALSO: Housing in Germany: Here's where demand and prices are soaring

Beyond the coronavirus crisis

Working from home and video conferencing may well continue to influence the working world after the pandemic is over.

Seventy-three percent of companies that have turned to home working during the pandemic plan to offer the option more widely in the future, according to a survey of around 800 staff executives conducted by the Ifo Institute in Munich, who spoke of the shift as a breakthrough.

A prolonged increase in the number of people working from home could lead to a shift in demand for housing, recent analysis by the property company JLL has revealed.

Higher living costs in the city and the comparatively lower prices in the surrounding areas could make the latter option more attractive for many. A woman working from home in Berlin. Photo: DPA

“The increased commuting costs would ultimately be balanced out”, wrote JLL-Expert Helge Scheunemann.

The coronavirus crisis has also led to a shift in people’s idea of their ideal home, with many now seeking studies, gardens, balconies and more space in general.

According to JLL, the cities particularly affected by this shift in demand will depend not only on price differences and transport connections, but also on the type of sector that people work in: office jobs can easily be done remotely, whilst manufacturing jobs require being on-site.

Which cities will be the most affected?

Cities like Munich, Cologne, Düsseldorf, Frankfurt and Darmstadt, where many work in office and service jobs, are ripe for a shift in housing demand. Major regional cities such as Münster, Jena and Dresden may also be suited to the change.

The coronavirus crisis forced companies to switch to large-scale remote working almost overnight – a departure from the norm in Germany, where office working usually plays an important role.

In 2018, office workers spent only around 11 percent of their hours working from home, according to calculations from the German Economic Institute.

But now, said Voigtländer, both employers and employees have realised that it can work well. Remote working can also help cut costs, which “is naturally attractive for companies.” Many have discovered the advantages of working from home. Photo: DPA

Large companies have already recognised its potential. Siemens now allows at least 140,000 of its employees worldwide to work remotely for two to three days a week.

At their annual general meeting, Deutsche Bank boss Christian Sewing asked whether the company should give employees more flexibility to work from home if they wanted to, and whether so much expensive office space in city centres is still necessary.

According to recent calculations from the DZ bank, having fixed workstations in offices is expensive. In 2019, a square metre of office space in the seven largest cities in Germany cost between €18 and €25 every month, including additional expenses.

The 30 square meters needed on average for each employee would cost €6,500 to €9,000 each year. For prime locations such as Berlin, Frankfurt or Munich, the cost can reach more than €15,000.

This is compounded by the fact that offices often lie empty – over the weekends, but also due to holidays, illness, business trips, remote working and part-time contracts. Office desks are used for only 190 days a year on average, according to DZ bank.

If companies want to save money, then it is worth considering hot desking. For employees, that would mean packing up their work materials and personal items such as family photos at the end of the day to leave the desk free for other colleagues.

The future of offices

Does this mean that offices have become an outdated model? If remote working remains popular, people will need space for a study, Voigtländer points out. “That takes away from the advantages of lower property prices in the country.”

READ ALSO: Nearly half of firms to allow working from home after coronavirus crisis

Remote working is also not without its drawbacks. “Face-to-face interaction in the office creates a sense of community spirit and allows employees to identify with the company they work for,” he said.

Additionally, not everyone is able to work well from home, and new employees will still need to receive induction training on-site.

Companies would have to cover for the costs of working remotely – tax deductions are so far only possible in some cases, for example if a person has a separate room in their designated as an office.

However, Germany is currently considering additional tax advantages for those who work from home.

“We will probably not all work from home forever,” said Voigtländer. “But we may see the emergence of a new work-life balance.”