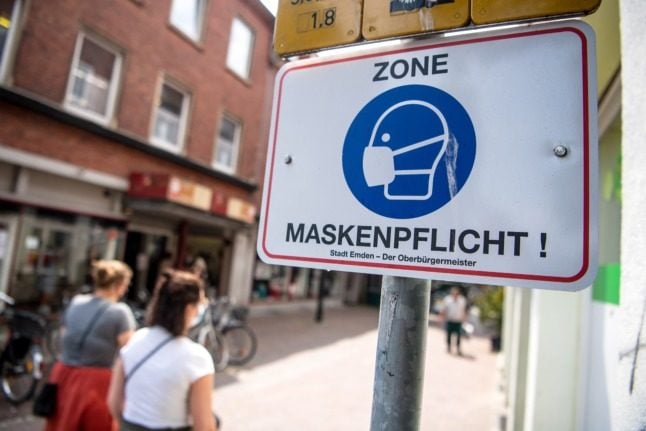 As scorching temperatures hit Germany this week, and people head out to parks and beer gardens, the verdict from the experts is clear: with infection rates falling, there should be no issue with dispensing with mask-wearing in open spaces.

In an interview with the Redaktionsnetzwerk Deutschland, Gernot Marx, the President of the German Interdisciplinary Association for Intensive Care and Intensive Care Emergency Medicine (DIVI), said that people should be allowed to enjoy a little bit more normality when socialising outdoors this summer.

“Generally speaking, there’s no reason not to,” he said. “We spend a lot of time outdoors in summer, and the infection rates continue to fall. And the most important thing: more and more people have had either one or two vaccine shots.”

While no environment can be classed as zero-risk, highly ventilated or outdoor areas are generally seen as safer because the aerosol particles that can transmit the Covid-19 virus are more widely dispersed in the air.

“Outside, where you can have a lot of distance between many people over a large area and the aerosols don’t collect in a single space, you can definitely take off the mask and regain a bit of normality,” added Marx.

Virologist Melanie Brinkmann, who has advised the government throughout the Covid-19 crisis, and Peter Walger, an expert in infectious diseases, also agreed with Marx’s assessment.

“Since the spread of pathogens via aerosols is barely an issue outdoors, we could dispense with masks outside,” Brinkmann told the Braunschweiger Zeitung.

However, Marx believes people should still consider wearing masks in outdoor situations where they may be in closer contact with others, such as at bus stops or in queues.

Too soon to remove masks indoors

While virologists and other health experts are happy to see masks done away with outdoors, many believe it is far too soon to get rid of them in indoor areas, where the chance of transmission is significantly higher.

“When we’re at a point where we’ve got a 70 percent vaccination rate and the incidence remains at a low level, then we can start having that discussion,” said Marx.

As of Tuesday, 26.8 percent of the German population had been fully vaccinated, while around 48 percent had had at least one dose of vaccine. While the vaccination drive has been picking up pace in recent months, the country is unlikely to reach the 70 percent mark for a number of months.

In some states, as infection rates drop below a critical point, schools are now allowed to remove the the obligation to wear masks.

In North Rhine-Westphalia, for example, the requirement to wear masks indoors in schools was dropped after the seven-day incidence per 100,000 residents dropped below 35.

“It’s a bit too early,” said Brinkmann, adding that many pupils and teachers aren’t yet vaccinated and that rapid tests aren’t entirely reliable. “The summer holidays are coming soon – couldn’t we have waited another few weeks?”

Despite the warnings from the experts, some politicians – particularly from the pro-business Free Democratic Party (FDP) – continue to call for the mask-wearing requirement to be lifted both outdoors and indoors.

“A complete waiver of the mask requirement shortly before the vaccination of millions is only one thing: fighting an election campaign with the health of the citizens,” he wrote.

“Of course, the mask requirement can be lifted almost everywhere outside. There is no super spreading outside. But unfortunately inside [it has to stay].”

Over the weekend, Justice Minister Christine Lambrecht (SPD) called for states to reassess whether their mask-wearing rules were still proportionate to the risk of infection, particularly outdoors.

In some states, residents must still wear masks on busy squares, shopping streets, and playgrounds.