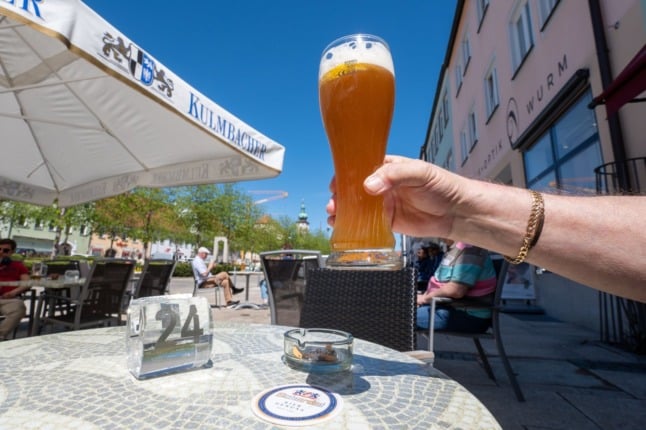 It wasn’t so long ago that the number of Covid-19 infections in seven days per 100,000 residents in Tirschenreuth stood at 355. But now it has become an infection-free zone.

The district on the Bavarian-Czech border, which is home to around 72,500 people, has the lowest 7-day incidence in all of Germany. According to the Robert Koch Institute (RKI), the incidence in Tirschenreuth was 0.0 on Thursday.

As recently as February, the incidence in the district, which lies on the German border with the Czech Republic, had been 355 – the highest number nationwide. Despite lockdowns and extra vaccine supplies being diverted to the area, the number of cases refused to budge for a long time.

And in April of last year during the first Covid wave, the incidence climbed as high as 571.

However, Tirschenreuth has turned a corner. There hasn’t been a single new Covid infection in the district since June 2nd. And, understandably, the region is delighted.

“It is with great pleasure that I can announce today a 7-day incidence of 0.00 for the district of Tirschenreuth,” said district administrator Roland Grillmeier, of the CSU.

Grillmeier is cautious about the reasons for the drop in infections, reported German newspaper the Tagesspiegel on Thursday.

“We have earned this success,” he said. “Through testing and vaccinating we have worked our way out of the crisis.”

Authorities say another reason for the low numbers is because so many people have already contracted the virus. That means immunity in the region has likely increased.

Despite the ‘zero Covid’ status, face masks still have to be worn in some public places and rapid tests are needed for activities such as going to the hairdresser.

And there are no special relaxations planned because of the low numbers.

Grillmeier appealed to residents to remain cautious because the outlook can change again quickly. For example he is concerned about the spread of the Delta variant, first detected in India. “We’ve seen ups and downs here and we need to be vigilant. The Corona rules continue to apply.”

The drop in incidence in Tirschenreuth also parallels the marked improvement in the coronavirus situation in nearby Weiden. Two weeks ago, the 7-day incidence in the Upper Palatinate city was pushed down to 2.3 – there was only one coronavirus case among more than 42,000 inhabitants.

“I think this is mainly due to the fact that we were the first to be affected by the second wave in October,” said Weiden Mayor Lothar Höher in an interview with Tagesspiegel. “That was also because we have many workers from the Czech Republic.”

In the Czech Republic, the coronavirus situation was particularly critical in Europe. On some occasions the incidence exceeded 800. Weiden is only about 30 kilometers from the Czech border.

Mayor Höher attributes the encouraging local situation to the fact that, firstly, Weiden is home to many people who have already had Covid – and they are likely to have built immunity. A second reason is that the town has received extra vaccine doses from the EU and Bavaria aimed at tackling Covid hotspots in border regions.

In February, the mayor of Tirschenreuth, Franz Stahl, had criticised a lack of action by politicians to implement regular testing at borders, and getting vaccinations to people quickly.

“Partly we are already left alone,” he said at the time in an interview with Tagesspiegel.  “Particularly in the border regions, where the incidences have been high for weeks – we need more vaccine.”

“We should have started much earlier with rapid tests at the borders.”

Covid numbers have been falling in Germany in recent weeks.

And the incidence in Schwerin, the capital of Mecklenburg-Western Pomerania, has also dropped to 0.0. No new coronavirus infections have been registered in the city within the last seven days.

Two districts in Lower Saxony – Goslar and Friesland – recently reached the the much-coveted ‘zero-Covid’ status. Goslar now has an incidence of just 1.5 and Friesland’s incidence is 2.

In general, northern Germany is doing very well – in the state of Meck-Pomm, the incidence is 5.3, while Baden-Württemberg has a much higher rate with 25.9. Meanwhile, the city of Zweibrücken in Rhineland-Palatinate has the highest incidence in Germany when it comes to districts and cities, with 72.1.