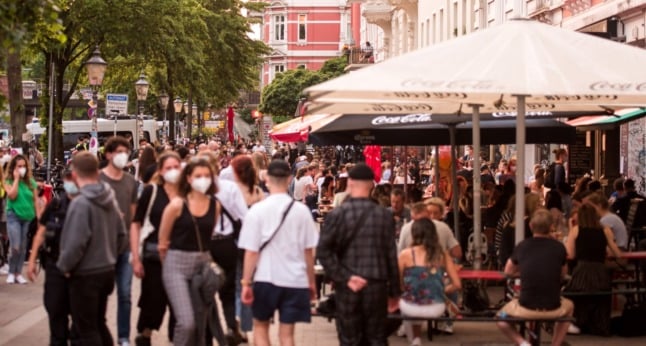 The number of cases per 100,000 people within seven days dropped to 22.9 on Tuesday June 8th, Robert Koch Institute (RKI) figures showed. The day before the incidence was 24.3 and a week ago it stood at 35.2.

In total, health authorities in Germany reported 1,204 new Covid-19 infections within a day. That’s 33 percent down on the previous week, when 1,785 infections were logged.

The 7-day average of new cases is at the lowest number since October 8th, 2020 – exactly eight months ago.

However, the number of deaths remains in the low three-digit range. A total of 140 people died in Germany from or with Covid within 24 hours. A week ago there were 153 deaths recorded.

What about the situation locally?

The 7-day incidence in all federal states has now fallen to under 30. The incidences have varied greatly between regions for months but they have all been falling in the last few weeks.

Politicians have been using the incidence number to decide when more of public life can reopen and restrictions can be eased. Many places have been reopening tourism, indoor dining and gyms in recent days, as well as relaxing contact restrictions.

The Our World in Data chart gives an idea of daily new confirmed cases per million people in Germany and a few other large countries showing developing trends.

The incidence is currently highest in Germany’s smallest state – Saarland – with 28.5 infections per 100,000 people, closely followed by Baden Württemberg with 28.

Hesse and North Rhine-Westphalia have a 7-day incidence of 26, while Thuringia has an incidence rate of 27.

State by state: How to apply for a Covid vaccine in Germany

Berlin and Rhineland-Palatinate both have an incidence rate of 24.2. It’s even lower in Bavaria with 23.6 infections per 100,000 people. In Hamburg the 7-day incidence is just 16.7.

In Mecklenburg-Western Pomerania the 7-day incidence is extremely low – with 8.7 infections per 100,000 residents in seven days. It is also very low in Schleswig-Holstein (11) and Brandenburg (12.9).

The encouraging trend can be shown on the RKI’s map of Germany (shown in the below tweet) which was previously coloured dark red in many places, but now has become noticeably lighter, meaning that the situation is much better. Plus two districts have reached the much-coveted ‘zero-Covid’ status.

Goslar and Friesland in Lower Saxony have not logged any new coronavirus cases for at least seven days and the incidence is currently 0. However, they do still have active cases: in Friesland (as of yesterday) there were seven active cases, and Goslar has 48.

Welt data journalist Olaf Gersemann tweeted to say the grey circles (showing the locations of Friesland in the north west and Goslar in the centre) show where no new cases have been reported within the last seven days.

But there are still some red spots. The district with the highest incidence is Kronach in Upper Franconia, Bavaria, where the 7-day incidence is 83.9 and, therefore, well above the national average. Zweibrücken in Rhineland-Palatinate also has an incidence of 73.1.

Interestingly, the district of Berlin-Neukölln, which has had consistently high Covid cases throughout the crisis, has a 7-day incidence of 52 cases per 100,000 people. All German cities and districts north of it have an incidence of below 50.

Currently 19 of the 412 districts in Germany have an incidence above 50.

READ ALSO: 7 things the Covid crisis has taught us about Germany

The RKI has logged around 3.7 million detected infections with Sars-CoV-2 since the beginning of the pandemic. The actual total number is likely to be significantly higher, however, since many infections are not recognised.

Around 3.5 million people are estimated to have recovered from Covid-19. The number of people who have died with or from Covid stands at around 89,384.

According to the RKI report on Monday, the nationwide 7-day reproductive number (R) was 0.76 (previous day: 0.81). This means that 100 infected people theoretically go on to infect 76 other people.

The R number represents the occurrence of infection eight to 16 days ago. If it is below one for a long time, the infection process subsides; if it is consistently higher, the number of cases increases.

What about vaccinations and the situation in hospitals?

The latest data shows that 46 percent of the German population has received at least one vaccine dose, and 21.9 percent are fully vaccinated against Covid-19.

On Monday June 7th, Germany dropped the strict priority list it had put in place to make sure vulnerable people and those most exposed to Covid could get a vaccine appointment first. Now – in most states – vaccines are open to everyone over the age of 12.

READ ALSO: Germany opens up vaccines to everyone over the age of 12

Meanwhile, the number of Covid patients in ICU in Germany has fallen to 1,796 – the lowest number since October 29th 2020. Of those, 1,147 are receiving ventilation treatment. The number of free intensive care beds in Germany has increased by 6 percent to 3,989.