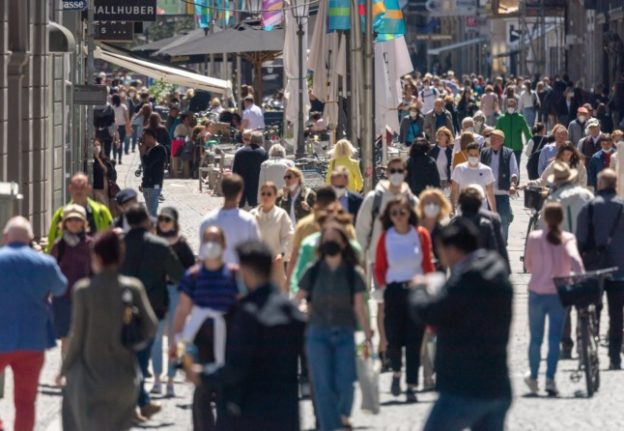 Pedestrians in the centre of Munich on Monday. Photo: picture alliance/dpa | Peter Kneffel

Due to current low infection figures, the regulation is set to expire, Merkel said on Monday in Berlin. The countrywide regulation provides for automatic nighttime curfews and school closures in areas with a high 7-day incidence of Covid cases.

Merkel nevertheless urged caution. If the numbers rise again, the ’emergency brake’ could be reinstated at any time, the Chancellor said after the meeting.

“Covid-19 is still there, although fortunately the incidences are now declining,” said Merkel. “We also need to continue to be sensible to a greater extent than if this pandemic didn’t exist.”

What are the current figures?

However, for the first time in three weeks, the 7-day incidence in Germany stands higher than the previous day, according to figures released by the Robert Koch Institute (RKI) on Tuesday morning.

The current 7-day incidence stands at 35.2, up from 35.1 on Monday. However, the numbers are significantly down from a week ago, when the incidence stood at 58.4.

The following DPA graphic shows that the majority of Germany is reporting a 7-day incidence below 35 as of Tuesday June 1st. Excluding the rise in the last 24 hours, the incidence had last jumped between May 9th to May 10th, but then continued to steadily fall.

READ ALSO: How did Germany get Covid cases down – and will the trend continue?

However, the RKI said that it’s difficult to know what led to the slight increase in infections. After the Whit Monday national holiday (May 24th), the RKI had pointed out that the holiday may have initially led to fewer people getting tested – and thus a lower incidence.

Other politicians call for reduced restrictions – with limits

But he added that companies must continue to allow their employees to work from home. “We must remain cautious,” the Vice Chancellor said on Monday.

The chairman of the Bundestag’s health committee, on the other hand, believes it is necessary to keep the federal emergency brake in sight beyond the end of June.

“Especially because of the virus variations, I think it makes sense,” CDU politician Erwin Rüddel told the Neue Osnabrücker Zeitung.

“If the incidences remain so low, the emergency brake will not take effect and we will all enjoy our freedoms again for the most part. However, if incidences rise again, it’s important to be able to react quickly to keep the numbers under control.”

The emergency brake has been in force since April 23rd. It was the first nationwide regulation which specified that numerous contact restrictions must apply in cities and districts which clock up more than 100 Covid infections per 100,000 people in seven days ( 7-day incidence).

It was put in place after many states went their own way on Covid restrictions instead of following rules agreed by the government and state leaders.

The curfew between 10pm and 5am was particularly controversial.

It also stated that schools must be closed at a 7-day incidence of 165. When the emergency brake was passed, the incidence nationwide averaged around 160.