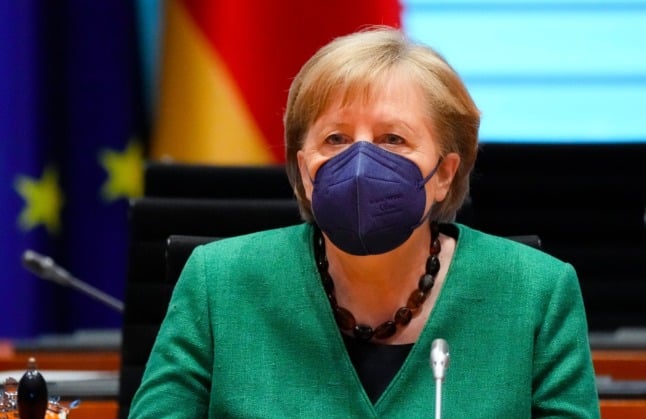 Germany is holding a vaccination summit to discuss the next steps of the inoculation campaign. Chancellor Angela Merkel and the leaders of the 16 states are taking part in the discussions which were due to begin at 2pm on Thursday.

What’s the latest on 12-15 year-olds getting the vaccine?

A debate over when children and young people can receive their Covid vaccination has been raging over the last few days across Germany.

The EU Medicines Agency (EMA) is currently reviewing whether to approve the vaccine from BioNTech and Pfizer for young people aged 12-15. The decision is expected on Friday.

This jab has so far been approved for people aged 16 and over in the EU. US regulators earlier this month authorised the vaccine for children in this age group.

Pending the decision, the German government wants to make sure everyone aged 12-15 is offered a jab by the end of August.

This is to ensure that schools can get back to some kind of normality after the summer vacations.

READ ALSO: Covid jabs for children in Germany will be an ‘individual decision’ says Health Minister

But there indications that the Standing Commission on Vaccination (STIKO) might not issue a general vaccination recommendation for all children.

STIKO member Rüdger von Kries told broadcaster RBB that not enough is known about the potential side effects of vaccines against Covid-19 in children.

“If the risk is unclear, I cannot foresee at the moment that there will be a recommendation for widespread vaccinations,” he said.

The head of the National Association of Statutory Health Insurance Physicians (KBV), Andreas Gassen, agreed with STIKO’s stance. He told the Handelsblatt: “It would be perfectly understandable if the STIKO did not issue a vaccination recommendation. The studies on the risk of infection in children are very thin so far.”

The head of the German Medical Association Klaus Reinhardt also said there is a need for clarification. “The data situation on the risks and benefits of a possible coronavirus vaccination in children and adolescents is currently still so insufficient that no recommendation can be made,” he said.

He acknowledged that it would be helpful to offer jabs to to as many children as possible before the start of the next school year, adding: “But we have always advocated a vaccination strategy that puts scientific diligence before speed.”

But SPD health expert Karl Lauterbach expressed criticism of STIKO considerations to recommend the BioNTech vaccine only for young people with pre-existing conditions after its expected approval by the EMA.

He told Spiegel that he would find it “disappointing” if STIKO did not make a general recommendation to vaccinate children, thus shifting the responsibility to parents and doctors.

Health Minister Jens Spahn says the aim is to still to offer all 12-15-year-olds at least one jab by the end of August.

During the vaccination summit, Merkel and state leaders will also discuss the concrete logistics behind vaccinations for this age group – for example – whether they will take place via schools or doctors’ practices.

Bavarian premier Markus Söder tweeted from the vaccine summit. He said: “We need more vaccine doses so that we can offer vaccinations to everyone aged 12 and over – as soon as it is approved.”

German authorities have stressed that vaccines for children will not be mandatory.

In future, Germany’s digital vaccination certificate, also called “CovPass”, is to be produced directly in practices or vaccination centres and can then be used via a smartphone.

It will also be possible to issue the certificate at a later date – at doctors’ surgeries and pharmacies. The aim is to start this initiative in the second half of 2021 – so around late June.

At the moment there are still lots of unanswered questions on how this will work so this is a topic on the agenda.

READ ALSO: What is Germany’s new digital vaccination pass and when can I get it?

How can Germany speed up vaccine campaign?

Around 41.5 percent of the population has received at least one vaccine dose so far and 15.7 percent are fully vaccinated, according to the latest data from the Robert Koch Institute (RKI).

A huge amount of shots – 1.13 million – were delivered into arms of people across Germany on Wednesday.

The vaccination campaign in Germany reached its previous peak on May 12th, with 1.4 million shots administered in one day.

But there are still plans to discuss how Germany can speed up the rollout, looking at supplies, organisation and locations for vaccinations.

For steps like these, “the course must be set” within the framework of the vaccination summit.

Experts have also said vaccinating is the key to getting ahead of variants, such as the Indian variant which Germany is monitoring at the moment.

READ ALSO: How many people have been vaccinated so far in Germany?

Germany is set to drop its strict priority list and open up vaccines to everyone over the age of 16 from June 7th.