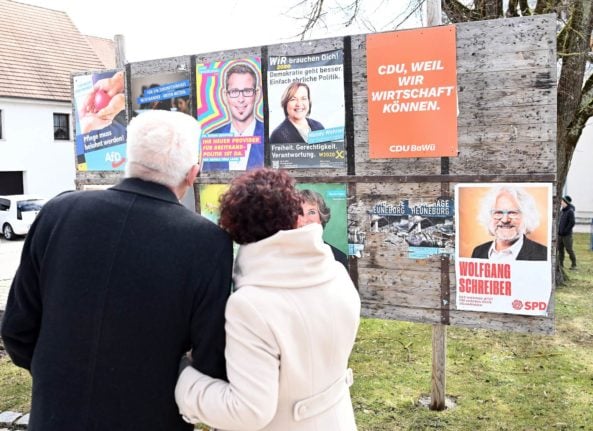 Winfried Kretschmann, state premier of Baden-Württemberg, and his wife on Sunday looking at campaign posters in their southwestern state. Photo: DPA

The centre-right Christian Democratic Union (CDU) scored its worst-ever results in elections in the southwestern states of Baden-Württemberg and Rhineland-Palatinate, according to preliminary results published by the states.

Armin Laschet, elected as the new head of the CDU in January, acknowledged that the government had fallen short in its handling of the outbreak as the dismal election results were blamed on growing public anger.

“The corona crisis is affecting everyone in our country, and that is why there have been debates about corona management. We must improve here,” he told reporters in Berlin, admitting the election results were “disappointing” for the CDU.

Markus Söder, the head of the CDU’s Bavarian sister party, the CSU, called  the results a “wake-up call” for the conservative alliance, also honing in on mistakes in the government’s virus response.

The party must prove it can “govern well and reliably” in the run-up to the general election and offer a vision for the future, he said.

The CDU-CSU alliance “must give answers to these questions, and it must give them decisively,” he added.

Sunday’s rout was blamed on voter frustration over a sluggish vaccine rollout, a delayed start to mass rapid testing and higher infection numbers despite months of shutdowns.

In the days leading up to the regional votes, the conservative alliance was also rocked by revelations of lawmakers apparently profiting from deals to  procure face masks in the early days of the pandemic.

Three conservative MPs have since resigned, and the CDU/CSU alliance has forced all its lawmakers to declare any financial gain from the coronavirus crisis, vowing “zero tolerance”.

The poor election results also raised questions about the conservatives’ chances in the September 26th general election, when Germans will choose a  successor to outgoing leader Merkel.

“It can’t go on like this,” said Der Spiegel weekly, saying Merkel’s house  was “on fire”.

The first order of business should be to decide the alliance’s candidate for chancellor, Spiegel said.

Laschet needs to “free himself from Merkel’s shadow” and “say what the party stands for”, Andreas Roedder, a historian at Mainz university and a CDU member, told the Bild newspaper.

Opinion polls suggest Germans would prefer to see Söder in the top job, but he has yet to declare a willingness to run.

Laschet said the conservatives would stick to a timetable of naming a  candidate sometime between Easter in early April and Pentecost on May 23rd.

Merkel’s CDU garnered just 24 percent of the vote in the wealthy state of  Baden-Wuerttemberg, down from 27 percent five years ago, preliminary results  showed.

The state is an outlier in Germany because it has been run by a premier from the Green party for over a decade, Winfried Kretschmann. Kretschmann, 72, led the centre-left ecologists to a record result of more than 32 percent.

Support for the Greens has risen in recent years on growing concern about climate change, and they could emerge as kingmakers in September’s election.

Green party co-leader Robert Habeck on Monday welcomed the result as “a great sign that people are willing to give us responsibility and mandates, and to give us their trust” in times of crisis.

In neighbouring Rhineland-Palatinate, popular state premier Malu Dreyer  powered the centre-left Social Democratic Party (SPD) to another victory with  a score of around 36 percent.

The conservatives’ woes come as Germany braces for a third Covid-19 wave, even while proceeding with a gradual reopening of schools and non-essential shops.

Latest forecasts by the country’s Robert Koch Institute for infectious diseases predict that by mid-April, new infections could surpass the peak seen in December, when some 30,000 cases were reported a day.

Merkel and the premiers of Germany’s 16 federal states will discuss next steps in the pandemic fight on March 22nd.