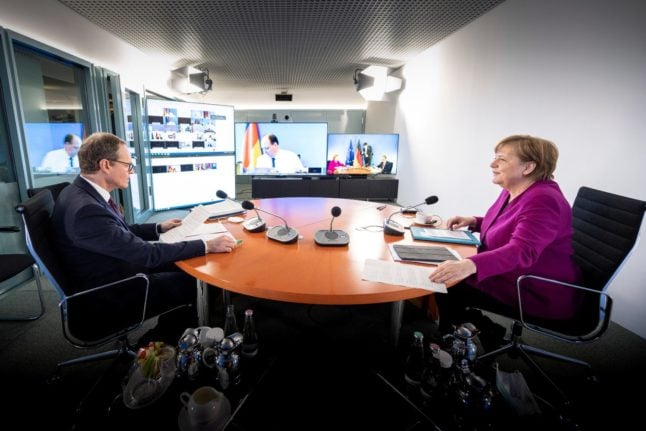 Still, several measures are set to be relaxed from Monday March 8th, reported DPA and Spiegel Online, with most individual states likely to set their own varying rules.

The possibility of private meetings with friends, relatives and acquaintances will be extended again: gatherings involving members of two households with a maximum of five people will be allowed.

Children up to 14 would not be counted, and all couples will be considered as a household.

The resolution also provides for a so-called emergency brake which would see relaxations reversed. If the so-called 7-day incidence of new Covid-19 infections per 100,000 inhabitants rises to more than 100 on three consecutive days, the stricter rules currently still in force will come into effect again from the second following working day.

In this case private gatherings would be limited to one household being allowed to meet with one other person – as the rule currently stands.

“In all cases, keeping the number of households with which such gatherings occur as constant and small as possible (‘social bubble’) or having all participants self-test prior to the gathering will significantly help reduce the risk of infection,” the state and federal governments said in their final agreement.

Germany currently has a 7-day incidence of around 64, according to the Robert Koch Institute (RKI). The country has been in a shutdown which has largely seen public life come to a halt since the beginning of November. The current lockdown was set to end on March 7th.

Garden centres, flower and book stores can also reopen nationwide from March 8th – but under restrictions.

The federal and state governments want to speed up the lagging vaccination campaign. Staff at schools and daycare centres (Kitas) are to be given a vaccine at the vaccination centres with immediate effect, as was decided last week.

From the end of March or at the latest at the beginning of April, GPs and specialists in many health practices should also be able to vaccinate more comprehensively than before, DPA learned from several sources at the meeting.

Individual states will also be able to decide the order in which they vaccinate, but what exactly this entails is still unclear.

Up to now, vaccination has been carried out mainly in specially built test centres, because the vaccines have to be stored in a special way. However, this won’t always be necessary, as not all vaccines require special storage.

In addition, AstraZeneca’s coronavirus vaccine is expected to be released soon for all age groups. Until now, the vaccine has only been approved for 18- to 64-year-olds, as Germany’s vaccine commission ruled there was a lack of study data for older people.

Free rapid Covid-19 tests are also set to become available for all by the beginning of April. Originally German Health Minister Spahn had promised them by March 1st, and has been criticised when the plan did not come into effect then.