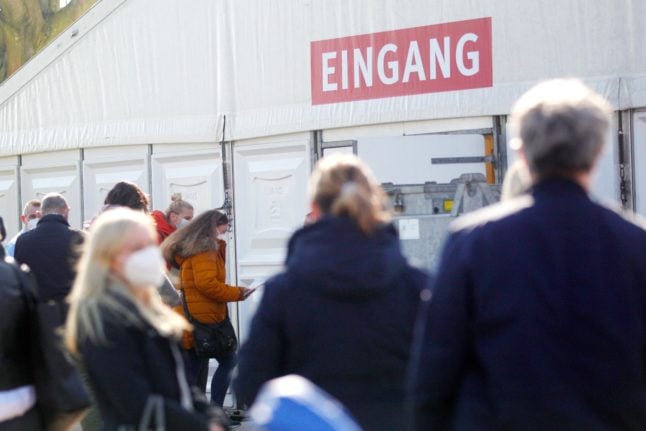 Primary school teachers and daycare workers wait outside a tent in Krefeld on March 2nd for their registration for vaccines to be checked. Photo: DPA

Just over five percent of the more than 83 million people who live in Germany have received one of two jabs against coronavirus so far.

So it’s frustrating that hundreds of thousands of doses of the British-Swedish AstraZeneca vaccine are piling up unused.

Although there have been calls to open up the vaccine to more sections of the population, the German government is not planning to deviate too far away from the current vaccination order. It focuses on older people, health care employees, key workers and people with health conditions.

However, the controversy around doses not being used contributed to the government’s decision to move teachers and childcare workers from priority group three to group two. AstraZeneca is currently only available for people aged 18-64, although the vaccine committee is looking at whether it could be used on older age groups too due to fresh studies.

Nevertheless millions of AstraZeneca doses could soon be piling up if states fail to quickly ramp up the pace of vaccination. But now there are positive signals – and some explanations for the slow start, according to a report in German daily Welt on Wednesday.

Across the 16 states, hopes are growing for a more efficient rollout of the AstraZeneca/Oxford vaccine after the hesitant start. Several states expect a significant push of vaccinations in the coming days, according to a query by DPA. Until recently, only a small proportion of the doses supplied had been administered

The AstraZeneca vaccine backlog in figures

A total of almost 3.2 million doses of the AstraZeneca vaccine will be delivered to states across the country by Thursday, according to the Health Ministry.

However, according to figures from the Robert Koch Institute (RKI), only 514,000 doses had been administered up to and including Monday.

Compared to the quantities of vaccine, the pace was still quite slow at the start of the week: on Monday, about 59,000 people were vaccinated with it, over the weekend about 91,000 people got it. If that pace continues, more than two million doses could be in stockpiles by the end of the week.

Why more vaccinations could actually be administered now

In several federal states, vaccination dates for the second priority group are already being allocated, others are planning to do so – and that means millions of additional people could soon be entitled to it.

In North Rhine-Westphalia, for example, around 750,000 daycare centre teachers, childminders, primary school teachers and patrol officers are to receive a vaccination offer from Monday.

“We just want to vaccinate as much as we can,” said state health minister Karl-Josef Laumann (CDU). In Hesse, 12,000 doctors and medical staff have recently received their AstraZeneca dose, and teachers, childcare staff and police officers are also to get their turn soon.

And the reservations from the public, which led to people turning down appointments for AstraZeneca in favour of the BioNTech/Pfizer and Moderna jab, seem to be fading.

At the start of the week, Brandenburg reported that around 90 percent of people turned up for appointments. In Thuringia the injection appointments for education staff were allocated within a few hours.

Baden-Württemberg, too, is registering a stronger demand for appointments among teachers or daycare staff. In the meantime, more than one million people in the state are now entitled to vaccinations after key staff were moved into group two, the state said say.

The city of Krefeld in North Rhine-Westphalia showed how quickly this can be done. There, 600 employees of schools and daycare centres were vaccinated on Tuesday with AstraZeneca doses received at short notice and not planned for – six days before the nationwide vaccination rollout for this group.

So why has there been such a slow start?

Yet there are still piles of doses in the fridge. Although there is undoubtedly a reluctance among some Germans first in line for a Covid jab to take the AstraZeneca vaccine, this is only part of the truth over why is it sitting unused.

The issue also comes to bureaucracy and organisation at the state level, as well as staffing issues.

In Schleswig-Holstein, for example, the booking system first had to be changed in order to be able to use AstraZeneca on a large scale in the vaccination centres.

In North Rhine-Westphalia, the pace of vaccination in hospitals was recently deliberately slowed down because some staff members were absent for a short time after vaccination due to temporary  The vaccination dates were therefore stretched out over a longer period of time – so that not too many employees would be absent at the same time.

And Baden-Württemberg justified the low vaccination figures with a statistical delay: vaccinations in hospitals are only recorded statistically in the vaccination centres after a delay.

Chancellor Angela Merkel’s spokesman, Steffen Seibert, recently rejected the impression that Covid-19 vaccine doses were simply lying around unused. Doses could have been freshly delivered, held back for a second vaccination or not yet administered but intended for certain priority people, he said.

However, groups and health experts are still calling for Germany to pick up the pace.

The social association VdK, for example, said AstraZeneca could be opened out to more vulnerable people.

“The vaccine is there, but it is going to waste in the vaccination centres,” said VdK head Verena Bentele. She said many chronically ill and disabled people were desperately waiting for appointments and not being prioritised.

Meanwhile, Social Democrat health expert Karl Lauterbach, among others, called for a drastic overhaul to the vaccination strategy. Lauterbach called for the two doses to be spaced out further in the style of countries like the UK. This would allow more people to receive the first jab quickly.