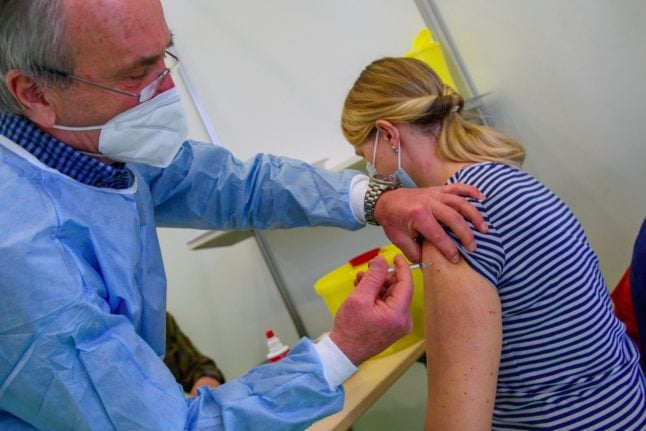 A woman being vaccinated in Saxony-Anhalt. Photo: DPA

Bavaria’s premier Markus Söder and Saxony state leader Michael Kretschmer want to see a more flexible vaccination programme in Germany with a focus on Covid-19 hotspots as part of a joint plan to improve local cooperation in the pandemic fight.

The two states share a border with the Czech Republic, which is currently struggling with extreme numbers of Covid-19 infections fuelled by variants. The number of cases per 100,000 residents within seven days is around 760, with regional peaks up to 1,800 – the highest number in the EU.

The measures put together by the states include a modified vaccination programme for hotspot regions, and aid for the Czech Republic.

Söder also called for a new vaccine concept in general to speed up the campaign. He said the AstraZeneca vaccine should be administered “as soon as possible” in Germany by GPs as well as vaccination centres, moving away from the strict vaccination priority list.

What are the plans?

Bavaria and Saxony want to see an increase in testing capacities and more vaccinations in border regions.

Areas such as the Bavarian town of Tirschenreuth and Saxony’s Vogtland lie close to the Czech Republic and are particularly affected by the virus spread.

Markus Söder said in a tweet said the “border triangle at the heart of Europe” is suffering particularly badly.

According to Kretschmer, of Chancellor Angela Merkel’s CDU, residents in badly-hit regions should be vaccinated faster with the AstraZeneca vaccine. The state premiers want to offer the jab “quickly” to everyone aged 18 and over.

That would be one way to prevent a coronavirus resurgence, Kretschmer said.

This proposal would be a considerable deviation from the federal government’s vaccination strategy which focuses strictly on priority groups. Chancellor Merkel and state leaders will discuss this topic during crunch talks on Wednesday.

“The vaccination concept must be completely revised,” said Söder, of the CDU’s Bavarian sister party the CSU, adding that more people must be inoculated especially in hotspots.

Germany has hit the headlines internationally in recent days due to reports of hundreds of thousands of AstraZeneca doses being left unused.

Medical regulators in Germany have only licenced the vaccine for use in the under 65s, leading to fears over its effectiveness compared to the two others approved for Europe, from Pfizer-BioNTech and Moderna.

The controversy has contributed to the government’s decision to move teachers and childcare workers from priority group three to group two.

“By April at the latest (when Germany is expecting a large number of vaccines), every dose of vaccine must be administered wherever possible,” Söder stressed.

He called for a national effort with GPs and other doctors helping with vaccinations. He also suggested mobile vaccination stations set up, for example, in universities.

“This is the only way we can catch up with the dramatic backlog that Germany has in vaccinations,” he said. “We have to catch up and we have to do better.”

The plan also provides for support to the Czech Republic. It includes an offer to care for Covid patients from the country, to give out more rapid antigen tests and also an initial one-off supply of 15,000 vaccination doses for people living in the border region.

This would stabilise the region across the border. The plan is also supported by Thuringia.

Söder said the move is a “symbolic measure of solidarity in the border region”.

He said German border regions benefit from Czech commuters in the health sector and businesses.

“If the Czech commuters are vaccinated, it will also benefit us greatly,”  he said, adding that people needed to be inoculated on both sides of the border.

On the Saxon side, schools and daycare centres closed again on Monday after reopening recently because of high infection figures.

The Czech Republic is classified as a mutation area, along with nearby Tyrol in Austria. For this reason, strict entry requirements have been in place for a fortnight for people entering Germany from these countries as part of tightened border controls.