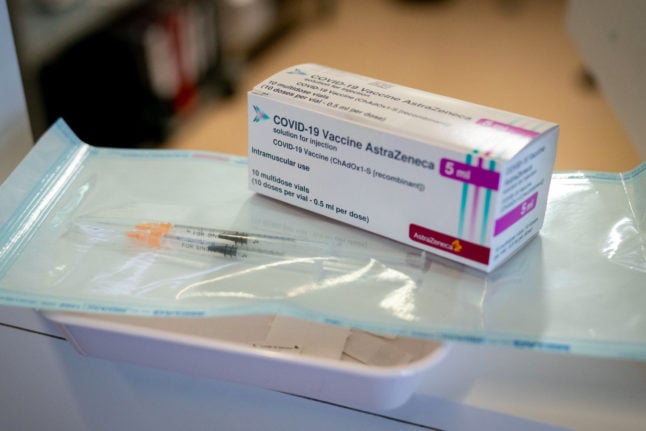 The AstraZeneca at a Berlin vaccination centre. Photo: DPA

Why are people in Germany refusing an AstraZeneca jab?

The world spent months waiting in desperation for a coronavirus vaccine. Now, thanks to the fast work of scientists, there are a selection available – but one of the vaccines is proving to be a sticking point in Germany.

That's likely down to a few reasons. One is that the vaccine from the Swedish-British AstraZeneca/Oxford team, has a slightly lower efficacy than the two other vaccines from BioNTech/Pfizer and Moderna which are also approved in Germany.

However, misleading coverage on the efficacy among above-65s, and a lack of clear communication on the vaccine has led to more people having reservations about it.

Last month Germany's vaccine commission STIKO said it was recommending the use of AstraZeneca's vaccine only for those between the ages of 18 and 64, due to insufficient data on its effectiveness on older people.

So why aren't vaccine doses being used?

It's simple on paper: if a person doesn't want a jab it should be rolled out to the next priority person.

However, due to what appears to be a lack of leadership on moving away from strict rules, health officials remain focused on the highest priority group which includes over 80s and health care employees with a high risk of contracting Covid-19.

Now calls are growing for AstraZeneca vaccine to be given out to more groups in the population.

“Then millions of under-65s could get vaccinated quickly, including police officers, teachers and educators.” Currently, he said, many vaccination centres only vaccinate five days a week for eight hours at a time.

“With the release (of the vaccine) for the first three groups, we could increase the utilisation to seven days a week.”

Lauterbach made similar comments to Bild am Sonntag. However, the SPD politician advised against releasing the AstraZeneca vaccine to everyone, as there are groups of the population that need protection more than others.

“Then partygoers could be vaccinated earlier than young doctors,” he said. “We have to avoid that.”

'We should vaccinate teachers quickly'

“It prevents many infections and protects against serious illness,” he said. “Vaccination can save lives.”

He said, “I am clearly not in favour of leaving vaccines lying around under any circumstances.”

Söder added that it must be made clear that the vaccine is effective. He said Germany could not justify having unused vaccine doses that could “significantly improve the situation”.

“We should vaccinate teachers and educators quickly,” Buschmann told Spiegel, especially as schools are gradually opening this week.

“The opportunity is there because there is currently comparatively lots of vaccine available from AstraZeneca,” he said.

“People with disabilities as well as teachers and educators must be given higher vaccination priority,” said FDP parliamentary group vice-chairman Michael Theurer.

“It can't be that hundreds of thousands of vaccine doses lie around unused because the state can't get the organisation of the vaccination campaign organised.”