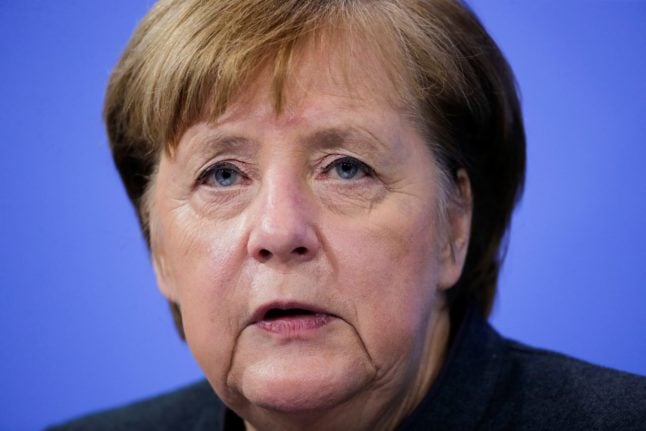 Merkel speaking at a press conference Tuesday evening. Photo: DPA
The move is a bid to halt coronavirus transmission and prevent virus variants believed to be more contagious from propagating in the country.
“We have to act now, that's what moved me and us during the consultations,” said Merkel, referring to the hours-long meeting on Tuesday between her and Germany's 16 state premieres.
Medical masks – that is surgical or the higher protection FFP2 masks – will now be required in public transport or essential shops such as supermarkets which have been allowed to stay open.

Companies are asked to allow workers to work from home when possible in order to reduce traffic on public transport. This measure is set to apply until March 15th.

The measure goes beyond previous appeals to companies to allow for more “home office” in Germany.

READ ALSO: EXPLAINED: What you should know about Germany's stricter lockdown measures

“All our efforts to contain the virus are threatened by a serious danger,” Merkel told reporters, referring to new strains of the virus that have caused a surge in infections in Britain and Ireland.

She added that the stricter curbs were necessary as “a precaution for our country, the health of our citizens and also for the economy”.

Germany closed restaurants, leisure and sporting facilities in November, then expanded the shutdown in mid-December to include schools and most shops to halt runaway growth in new coronavirus infections.

Merkel's spokesman Steffen Seibert said earlier the measures had brought about a “flattening of the infections curve”, noting that the number of patients in intensive care had fallen slightly.

Tuesday's talks between Merkel and state premiers were brought forward by a week because of concerns over the new variants discovered in South Africa and Britain.

Merkel said Germany would use an EU summit on Thursday to call for “synchronised measures” to rein in the spread of the new strains in member states.

New infections have soared far above the 50 per 100,000 people threshold set by the government. And last Thursday, the country saw a new high in daily deaths with 1,244.

On Tuesday, daily deaths reached 989 though health authorities said they might have been inflated after a lag in weekend reporting. More than 11,000 new cases were recorded.

Seibert noted on Monday that the incidence rate was still at over 130 per 100,000 people, and that Germany “must move quickly” bring that down to 50.

Experts have been alarmed by data showing that Germans appeared to be moving around almost as normal this winter, unlike in the spring when a shutdown appeared to have caused a drastic drop in mobility.

READ ALSO: LATEST: The charts and maps that explain the state of the pandemic in Germany

The mobility of Germans was only 15 percent below that of a year ago, according to data from mobile phone signals analysed by disease control agency Robert Koch Institute and Berlin's Humboldt University.

Ahead of Tuesday's talks, Economy Minister Peter Altmaier promised to simplify the procedure for businesses to get aid more quickly to help them cope with the prolonged shutdown.

Germany took on a record €130.5 billion ($160 billion) in new borrowing last year to fund its mega bailouts to companies and support schemes for families as the economy crashed due to the pandemic.

RKI chief Lothar Wieler has meanwhile pleaded for rigorous implementation of curbs that have already been ordered, saying that there were too many exceptions allowed. In northern Germany, officials were planning to take more drastic measures against people who breach quarantine rules.

Schleswig-Holstein state's justice ministry is turning a youth detention centre into a forced quarantine site for those who do not isolate themselves when required to.