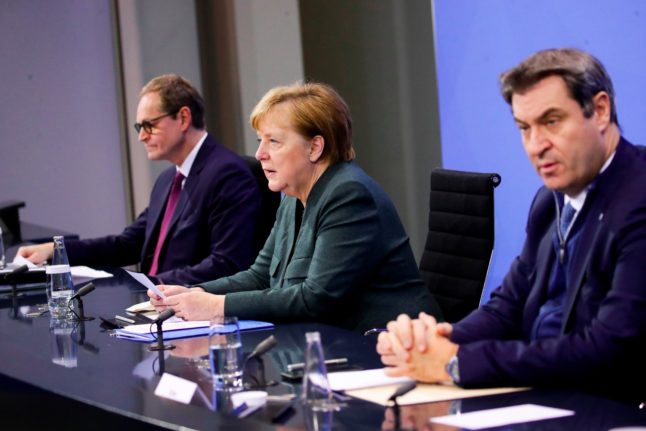 They announced the changes to coronavirus restrictions after talks lasting nearly eight hours.

In the final decision paper, the government and states said it was “clear that the restrictions have been taking effect since December 16th and that new infection figures are declining”.

They said the burden on hospitals and intensive care units is “now slightly declining” but is still at a high level. Merkel and state leaders said they were grateful and thanked residents for their “sensible behaviour” during the Christmas holidays.

However, they said there were challenges ahead, including vaccine supplies and dealing with the virus variants.

They said that “preventative action” had to be taken to limit the spread of the variants in Germany as much as possible.

The aim remains to bring the infection figures below a 7-day incidence of 50 new infections per 100,000 residents “so that we can regain normality at a low infection level, similar to last summer”.

The government and states added that If the viral mutations do prove to be more contagious, “a further significant worsening of the situation is likely. This must be avoided,” they said.

Here's what they decided:

The federal and state governments are to extend the current lockdown measures until February 14th. The measures were due to expire on January 31st.

That means shops, cafes and restaurants are to remain closed (except for takeaway food) along with leisure and cultural facilities.

People will have to wear “medical masks” while using local public transport and in shops under the new rules.

These are said to offer better protection than masks made of fabric. Generally, wearing these masks is also recommended for indoor meetings or gatherings over longer periods.

Mandatory FFP2 masks on transport and in shops were introduced in Bavaria this week.

The federal and state governments have agreed to introduce a regulation which means employers must allow people to do 'home office' or work from home if it is possible in their line of work.

Previously, the government and states strongly urged firms to allow employees to do this.

The Labour Ministry is to put together the new legislation which will be in place until March 15th 2021.

Employees who have to go to their workplace should be offered protective masks by employers.

The discussion on how to proceed with schools was particularly difficult. It was agreed that schools would generally remain closed until February 14th or that compulsory attendance would be suspended, meaning that classes could be held online.

The same procedure will be in place for daycare centres (Kitas).

Public transport should be less busy

Social contacts between people in Germany must be further cut down to limit Covid spread, the government and states say.

So authorities want to see that local buses, trains and trams only have a third of passengers on board at one time. To make this possible, the government is pushing for more people to work from home, flexible work schedules (made possible by firms) and more buses and trains.

Private gatherings in public or at home are only permitted among members of your own household and with a maximum of one other person not living in the household.

“Keeping the number of households from which the other persons come as constant and as small as possible (social bubbles) contributes significantly to reducing the risk of infection,” added the government and states.

In areas where the infection rate refuses to go down, states or districts should bring in more measures such as curfews and movement restrictions.

Soldiers from the German army (Bundeswehr) will provide support to care homes to help with rapid testing.

The aim is to ensure that the staff in the homes are tested several times a week, as are all visitors to the facilities.

Staff in old people's and nursing homes are required to wear FFP2 masks when coming into contact with residents, at least until the vaccinations with both doses have been completed.

Minimum distance must be observed in any services and medical masks must be worn. For meetings of more than 10 people, the relevant public order office (Ordungsamt) must be informed in advance. Singing is not allowed.

According to the government, nearly 50 percent of residents in nursing homes have been vaccinated. Germany is continuing to offer the vaccine to this group of people (and staff of care homes) before moving onto other groups.

The goal is to offer all residents in nursing homes a vaccination by mid-February at the latest.

Germany is to simplify the procedure for businesses to get aid more quickly to help them cope with the prolonged shutdown.

Germany wants to liaise with the EU to reach a joint strategy on how to limit the spread of virus variants and has not ruled out border checks.

What happens after February 14th?

According to the plans, a working group is to “develop a concept for a safe and fair opening strategy, which also creates the necessary conditions to avoid a renewed increase in numbers”.

However, the relaxing of measures will only take place if health authorities can guarantee contact tracing.