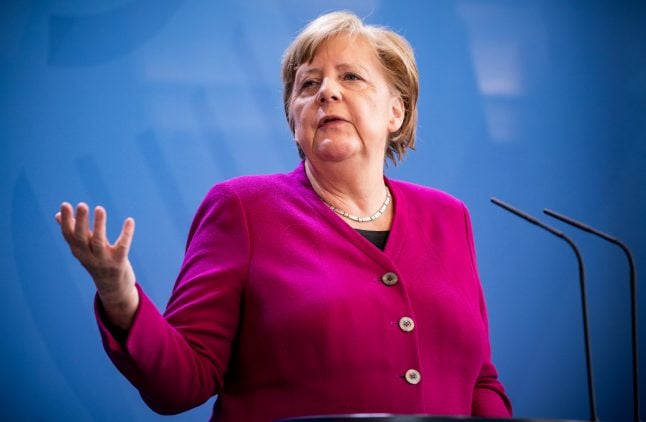 In the time of coronavirus, when public life is non-existent and the furthest many of us travel in a day is the kitchen, not much is surprising anymore.

It is comes from one of these fantastically German habits of sticking words together to create giant creations that foreigners struggle to say.

German broadcaster ZDF tweeted: “Angela Merkel criticizes “#Öffnungsdiskussionsorgien” – but often wins at Scrabble” which I thought was quite amusing.

Now who I am to judge how Merkel or indeed anyone is getting through this pandemic, although I'm pretty sure group sex cannot be classed as social distancing.

Still, Merkel has a point.

She's not best pleased that there is lots of talk about the country’s path out of lockdown. Everyone – not least the leaders of Germany’s 16 states – has an opinion about when schools and shops should reopen, and what the future holds.

But the point is that we're just not at this stage yet where things can return to normal.

“We must remain vigilant and disciplined,” Merkel said at the start of the week. She reiterated her message in the Bundestag on Thursday, adding: “We are not in the final phase of this pandemic; we're just at the beginning.”

Germany has been in the spotlight across the world because of its handling of the crisis. Of course the country and its health workers deserve this praise.

Thanks to quick action, testing, infection tracing and a strong health care system, Germany has managed to keep the number of deaths of coronavirus at a lower rate compared to other countries.

We don't know how anyone's handling of the pandemic will be viewed when we get out the other side but, as things stand, Germany is doing okay.

But it's not all plain sailing behind the scenes. The stereotype of Germany may be one of order, but there’s a whole lot of squabbling and disorder right now.

Why? Well, Germany's federal system means that states are responsible for enforcing the restrictions to slow down the spread of coronavirus. The German government sets out the recommendations and the states seemingly go off and do their own thing.

So at the moment we have North Rhine-Westphalia leader Armin Laschet who seems desperate to relax the lockdown at a quicker rate than some other states (and as it turns out, wants to be leader of the Christian Democrats). A Berlin park on Wednesday this week. Photo: DPA

Then you have Bavaria's Markus Söder, who has been calling for a gradual, careful approach, even cancelling his beloved-Oktoberfest months ahead. Plus there are all the other states which are also essentially deciding their own path.

All of this means states draw up their own restrictions, and fines, and there's a lot of confusion for people living there. I've heard from shop owners in Berlin who have no idea what the rules for the German capital are.

This week all of Germany's 16 states decided to make masks compulsory, but – surprise, surprise – there are different rules and fines across the board. It comes after Merkel and the government said masks were strongly recommended for public transport and shops – but not mandatory.

READ ALSO: Face masks in Germany: What are the requirements and potential fines in every state?

Are you confused yet? Because I am and I read about the news in Germany nearly every minute of the day when I'm awake.

A sense of denial

There's something else that's been worrying me about Germany: I’ve no doubt (and I hope) the majority of people have been taking the pandemic seriously.

Yet I wrote just a couple of weeks ago that it felt like lots of people in Berlin thought the crisis was already over. Carelessness seemed to have taken over the streets and the supermarkets.

Learning from our readers who live across Germany, I do have a sense that residents here are not quite as disciplined in the art of social distancing and following rules as the image may appear from the outside.

I wonder if it is because this pandemic has touched less people here in Germany. There’s a sense of denial. We have not experienced the trauma that’s going on in nearby countries like Italy, Spain and France. We have not seen those terrifying pictures of coffins or hospitals pushed-to-the-limits.

But that doesn't mean that this couldn't happen to us – and some scientists are warning that a second wave could hit Germany even worse than the first.

We watched and praised Merkel talk about how fragile the situation is and how easily it could all go downhill.