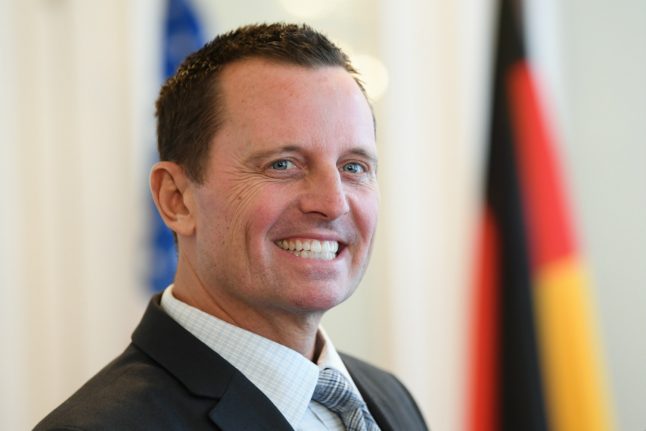 Grenell on the job in Berlin. Photo: DPA

Grenell, the ambassador to Germany where his blunt approach irritated the close ally, was named late Wednesday by Trump as acting director of national intelligence.

“Happy to jump in and serve our president,” he tweeted on Friday.

Happy to jump in and serve our country and our President @realDonaldTrump. https://t.co/AagYtOq6iV

The 53-year-old former political advisor, who has no directly relevant background or top-level management experience, will supervise 17 agencies including the CIA.

He has been unusually outspoken for an ambassador in criticizing the country where he serves, including warning German companies over Twitter to comply with Trump's orders not to do business in Iran.

His outspoken behaviour – including insisting on what Germany should do with it defence spending and telecom equipment – has led some German politicians to demand his expulsion.

He takes charge after a period of tension between Trump and intelligence professionals over Russian interference in the 2016 election, which the president has played down.

“He is committed to a non-political, non-partisan approach as head of the Intelligence Community, on which our safety and security depend,” White House press secretary Stephanie Grisham said in a statement Thursday.

“The president has every confidence that Ambassador Grenell will perform his new duties with distinction,” she added.

The longtime media commentator and former US spokesman at the United Nations will be the first openly gay US cabinet official, despite what activists say is a spotty record by Trump on LGBTQ rights.

Avoiding a potentially contentious confirmation fight, Trump named him acting director, meaning he can serve for 210 days without approval from the Senate.

Grenell on Twitter said he would not serve permanently and that Trump would “soon” select someone else as the nominee.

Correct. Acting. The President will announce the Nominee (not me) sometime soon. https://t.co/9ShqB2eXea

But he is the second acting director since the resignation in August of Dan Coats, who had publicly contradicted Trump on key issues including by standing firm in US intelligence's conclusion that Russia interfered in 2016 to back the billionaire over Hillary Clinton.

Grenell has previously cast doubt on the extent of Russia's efforts, saying that Moscow's activities were nothing new.

Trump last year backed down on plans to nominate another stalwart ally, Representative John Ratcliffe, who was also criticized by Democrats as overly partisan.

House Speaker Nancy Pelosi, the top Democrat in Congress, accused Trump of knowing that Grenell would not win Senate confirmation and showing “contempt for our Constitution's system of checks and balances.”

“Sadly, President Trump has once again put his political interests ahead of America's national security interests by appointing an acting director of national intelligence whose sole qualification is his absolute loyalty to the president,” she said in a statement.

Senator Ron Wyden, a Democrat on the intelligence committee, accused Trump of prioritizing “unquestioning obedience over the safety of the American people.”

“Mr Grenell's endorsement of the European far right, his gratuitous conflicts with our German allies and his lack of intelligence experience disqualify him on all counts,” he said in a statement.

READ ALSO: US ambassador 'doesn't want to be seen as as supporter of right': sources

Democratic Senator Ed Markey said he expected Grenell “will remain a political yes-man for Trump as he is in Berlin.”

Grenell has cheered on the rise of right-wing populists in Europe, including hailing Austria's ultra-conservative chancellor, Sebastian Kurz, as a “rock star.”

He previously drew controversy as a spokesman for Mitt Romney's 2012 presidential campaign, with reporters complaining that he would relentlessly attack them over Twitter.

Ned Price, a former aide to president Barack Obama, said Trump “has dropped the charade that he has any use for intelligence.”

Senior congressional Republicans were muted in their response to the nomination. But Representative Matt Gaetz, a conservative who backs gay rights, praised the historical importance of the appointment.

“Fifty years ago a gay man or woman couldn't work in the intelligence community,” he said.