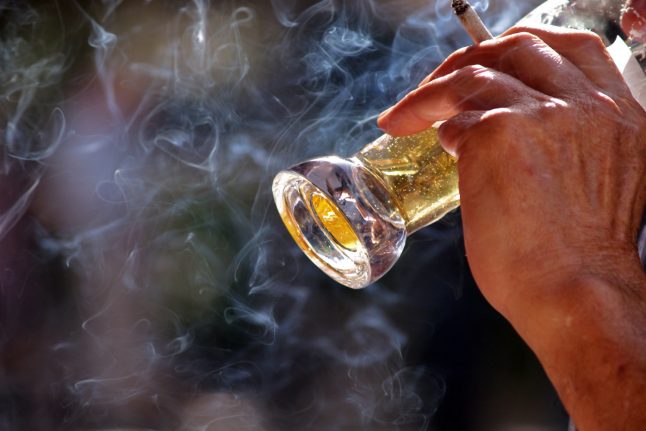 Gemütlichkeit is one of my favourite German words because it denotes coziness and warmth. And now that winter is here, the country embraces this attitude, wholeheartedly, in cafes and bars, with candles, blankets and warm drinks.

Yet winter in Germany also brings with it something distinctly unpositive: second-hand smoke.

In summer when the windows and doors are flung open and everyone spills out onto streets, it’s easier to avoid people blowing fumes into your face as they puff on their cigarettes or cigars and drop ash all over the place.

But come the colder months, there’s no getting away from it: you have to sit in bars with smoke building up around you, as the fresh air stays outside the closed windows.

It should be noted that it's not like this everywhere across the country. There are some states that really crack down on smoking in public places, and individual bars or restaurants that ask smokers to light up outside.

Yet I still find it strange that passive smoking doesn’t seem to be regarded as an important issue nationwide in Germany, a country that seems to pride itself on its love of the outdoors and frische Luft (fresh air).

You’ll find Germans queuing to pay for expensive organic vegetables at the Biomarkt in their quest to be healthy, or stocking up on superfoods at vegan supermarkets – and yet they’re happy to light up in confined spaces with other people around.

It's an act that doesn’t quite fit together with the rest of the healthy outlook on life.

To be clear, it’s not the fact that people smoke that’s the problem. It’s not for me to lecture people on what they should and shouldn’t do. Anyone should feel free to smoke at home or outside if they want to.

But it becomes an issue when I – and others – have to put up with it.

Why? There are a few reasons. One is that every time you spend some time in a bar or cafe that allows smoking you come out smelling like an ashtray. Clothes have to be chucked straight into the washing machine. You might even have to wash your hair twice to get rid of the lingering smell.

Here's another reason: after spending a few hours soaking up other people’s cigarette fumes, you then feel like you’ve smoked a pack of 20 yourself. After nights out in some bars I’ve even had a sore throat the next morning. Surely a hangover is enough without also having to feel like you've smoked?

Another point is that smoking is anti-social. I saw a young couple and their baby be turned away from a café bar that sold delicious-looking cakes in Berlin recently, because the owner said he couldn’t allow the baby to be around smokers.

Non-smokers health: a point to be considered

But apart from all this, the biggest reason has to be the effect that second-hand smoke has on non-smokers' health.

According to health experts, people exposed to second-hand smoke face the same dangers as smokers themselves. They too inhale the same poisonous gases and thousands of toxic chemicals found in tobacco smoke. Their risk of developing smoking-related diseases will also increase.

What’s more, it’s a huge problem for people who work in the service industry. Some friends who work in German bars say it’s one of the biggest hazards of their job.

One pal, who has asthma, struggles to get through a shift sometimes because of the smoke, but otherwise enjoys her job (and needs the money) so doesn’t want to quit.

So what’s going on? Why does Germany – a country that usually prides itself on its outdoor culture and healthy lifestyle – not stand up to second-hand smoke?

You might be surprised to know that the smoking ban does, in fact, exist here, although it appears to be far more relaxed than most other western countries.

In July 2007, the federal government passed a new law to protect non-smokers. In it, it urged the federal states to establish their own rules for smoking in pubs.

In Bavaria, North Rhine-Westphalia, and Saarland you can’t smoke in any pubs or restaurants.

But in other states, although there are regulations, it's much more relaxed and it’s still possible to smoke in some restaurants, bars, clubs and other public spaces.

By not cracking down on this issue Germany-wide, the government has inadvertently created this relaxed attitude to the smoking ban.

Foreigners who arrive in Germany are surprised that it's like this. One Brit who recently moved to Berlin told me: “I can't believe how often I smell smoke here, and even see so many people smoking. It seems there's a different attitude to smoking here, it's not frowned upon as much as in other countries like the UK.”

Even on U-bahn or S-bahn station platforms, Germans are often happy to light up. They just don't seem to take smoking laws as seriously as other parts of the world.

According to the latest figures from 2017, a quarter of the population (25 percent) smokes,  The European country with the highest number of smokers is Greece with 37 percent, while Sweden has just 7 percent.

Why is there resistance to the laws?

Perhaps it’s down to Germany’s history that makes the idea of enforcing laws seem like they are an attack on personal freedom and choices.

Some pro-tobacco groups have even linked crackdowns on smoking with the Nazi party which took an anti-smoking stance, but historians have argued the Nazi’s relationship with tobacco was much more complicated.

To me, the country’s reluctance to get on board with the smoking ban is seriously outdated.

Surely people don't think it's 'cool' to smoke nowadays? I'd like to hope we've come a long way from the 1960's 'Mad Men' lifestyle when it was deemed glamourous to puff on a cigarette.

Personally, I'm a huge fan of checking out punk bars and dingy Kneipe to hear some good music and meet  interesting people, but I can't say that smoking adds anything good to the atmosphere.

There are people who like smoking and just want to enjoy it with their friends over a pint or a coffee. And I totally understand that.

But guess what? If you enforce a smoking ban in public places, it doesn’t mean that you have to stop smoking! Will we ever be able to enjoy smoke-free bars in Germany? Photo: DPA

I worked in bar in Scotland when the smoking ban came into place in 2006. Here’s how it went: there was a lot of stress leading up to it, businesses said they’d have to shut because people wouldn’t come out, everyone feared what would happen.

In reality the ban came into place and people who wanted to smoke just went outside to do it. I’m sure smoking bans can have some impact on the number of people who take up the habit (which is surely only a good thing) but those who wanted to light up went ahead and did it.

They just did it away from other people.

For those who say it would be unsociable, it really isn’t. Closer relationships can form when you accompany someone to go out for a cigarette. And smokers are literally away from the table for five minutes; it’s not really that big a deal.

As a bar worker, not having to clean out ashtrays and deal with people waving smoke in my face while I worked was a revelation.

Why can’t Germany show hospitality workers and other punters some respect by taking their smoking laws seriously?

It would help everyone enjoy all of the country's bars and restaurants in a real gemütlich atmosphere that doesn't include smoke.