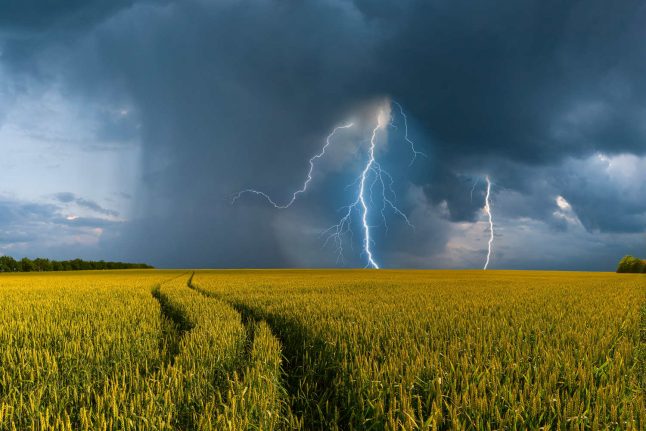 With a peak temperature of 32.9 degrees, Sunday was the hottest day of the year to date in Germany. According to the DWD (German Weather Service), the mercury jumped this high in Geldern-Walbeck, North Rhine-Westphalia, as well as in Lenzen (Elbe) in Brandenburg.

This heat is only expected to increase in eastern Germany, with highs of up to 35 degrees predicted for parts of Brandenburg on Monday. For the rest of the country, the temperature is expected to hover around 22 to 27 degrees.

READ ALSO: Temperatures of 30C predicted in Germany in June A girl enjoying the warm weather in Brandenburg on Sunday. Photo: DPA

But in the western regions of Germany, DWD warned of heavy thunderstorms with heavy rain, hail and gusts of wind.

On the weather portal kachelmannwetter.de, numerous lightning strikes were reported, particularly in the Rhine country, in the Ruhr district and south of Bremen.

Emergency services in Duisburg were deployed five times on Sunday night due to fallen trees. Several cars were damaged, but people were not injured. According to a police spokesman, numerous households in the Kleve district were briefly affected by a presumably storm-related power failure on Sunday evening.

Strong thunderstorms also struck in Düsseldorf, Mönchengladbach, Essen and Münster – according to the local fire brigades, however, these were mild and did not involve major operations. A car drives through a puddle in Düsseldorf on Sunday. Photo: DPA

DWD meteorologists expected the thunderstorms to move further east during the course of Monday. In a broad strip from Baden-Württemberg to the Baltic Sea, thunderstorms, heavy rain, wind – and even some hail is expected. In Saxony-Anhalt strong heat thunderstorms with heavy rain and hail are possible.

For Baden-Württemberg, a DWD meteorologist predicted 30 to 40 liters of rain per square meter and hail locally. They couldn’t yet say, however, exactly where the thunderstorms will occur.

“There is potential everywhere. The southern and southeastern part of the country will probably be most affected,” said the meteorologist.