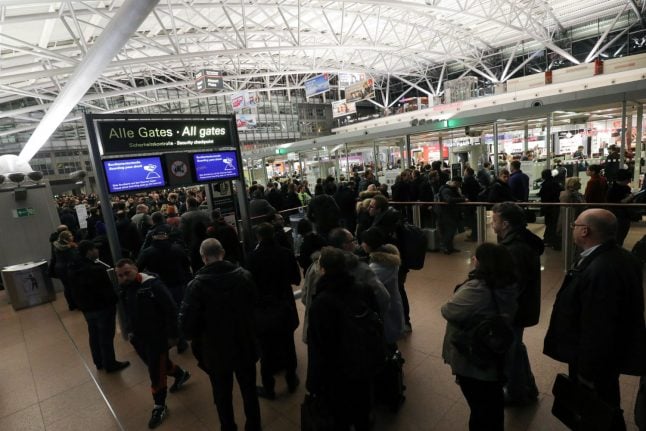 Nearly 60 flights have been axed so far at the international airport in the Hanseatic city, and travellers have been warned to expect more disruption.

The so-called 'warning strike' by ground staff was called at short notice on Sunday, by the powerful union Verdi, in connection with ongoing pay negotiations.

Air passengers were warned to expect delays as well as cancelled flights. A total of 58 flights were cancelled on Monday, according to an airport spokeswoman – including 27 arrivals and 31 departures. “There could also be some more,” she added.

A spokeswoman for the Verdi union said that around 150 employees on the early shift had downed their tools and walked out around 3am. Between 12noon and 2pm, employees on the late shift were also expected to join the action.

Verdi said the strike's been called because of the inadequate offer from bosses in the current collective bargaining round with the Employers' Association for Labour Law in Hamburg (AVH). Verdi demands a monthly wage increase of €275 for nearly 1000 employees in ground handling services.

“In the collective bargaining, we were told that €140 more would have to be demanded (from passengers) per aircraft,” said the Verdi spokeswoman. With an average of 124 passengers per flight, this amounts to customers paying about one euro more in order to fully meet the union's demands.

“Thirty-five people are busy handling a plane. People have to think about how much they pay for their ticket,” the spokeswoman added. On Monday morning there was only a skeleton team of ground staff, according to an airport spokeswoman. “At the moment there are no shuttle buses from the car parks further away to the airport,” she reported. A substitute service with taxis was planned.

Christian Noack, Managing Director of HAM Ground Handling, which is responsible for the ground staff services at Hamburg Airport, also took a critical view of the action.

SEE ALSO: When are airline passengers in Germany entitled to flight compensation?

Airports in Germany have been hit by several strikes in recent weeks, resulting in chaos for customers.

Air travellers in Germany also faced a series of strikes by Ryanair cabin and cockpit crew in the second half of 2018, including two pan-European walkouts, which caused huge disruptions.